An Evening of Enlightenment at The Book Loft

Yoga is meant to be a relaxing exercise to ease the mind and the body. Columbus specifically has a designed that is ‘queer-focused,’ and so as to provide a safe(r) space for community members that identify with the studio’s motto.

Their mission statement on their Facebook page states, “We endeavor to cultivate an atmosphere of acceptance and community in all we do, from sun salutations to post-yoga snack time.” Don’t worry about being a yoga pro, this class caters to both beginners and experts.

Zach Reau, co-founder and Charter Member of Queer Behavior, the organization that manages and hosts Queer Yoga, said that “Part of queering yoga is about accepting and celebrating our bodies for what they are, how they look, and what they’re able to achieve, rather than judging ourselves and others on what we should look like or be able to do.”

Reau said that when Queer Behavior and Queer Yoga started seven years ago, they set out a goal to bring people together as they thought the Columbus community was segregated (and still is)  from each other by race and sexuality. 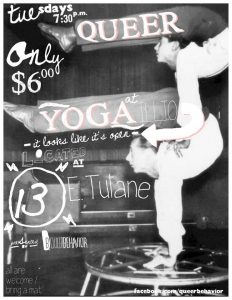 Through the yoga they attempt to be as inclusive as possible while still respecting everyone’s space and comfort zones. For example, at the start of every class, the instructor has everyone close their eyes and raise their hands if they feel on-hand position adjustments make them uncomfortable, that way, people can raise their concerns in a private manner while still actively participating.

For Reau, Queer Yoga was a personal experience as he himself was nervous to do yoga around other people. Who isn’t? Wearing stretchy pants and bending down till your nose touches your feet is nerve wracking for everyone. “It’s really empowering to see people take that risk and participate, ” said Reau, “I never imagined it would last this long.”

Their location rests in the aptly named, It Looks Like It’s Open Studio, a community arts studio. Each teacher is a guest and changes on rotation every week, but the classes remain a steady $6 dollars for all participants. Catch them tonight at 7:30, or stop by next week; their classes are held every Tuesday.

Queer Behavior and Queer Yoga will celebrate it’s 7th anniversary October 11th, so check back on their Facebook page for more updates!