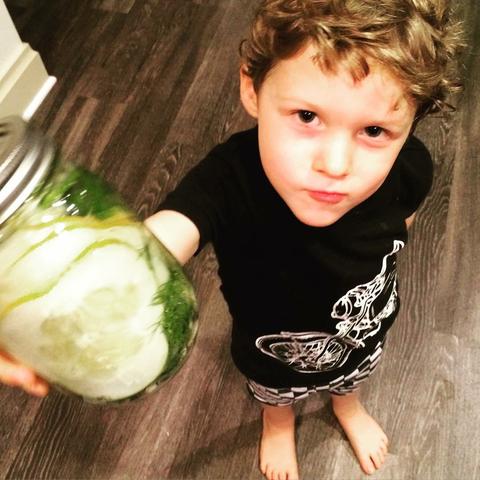 Lemonade stands are done – the fad is over ladies and gentleman because something far more adorable is making it’s way to the Short North.

Pickles. Lots and lots of pickles.No, it’s not artisanal pickles bottled in free-range vinegar. It’s far cuter. All sold by an adorable little kid named Kazim. He is five and this is his first business. I’m sure there will be many more in the future.

His mother spoke with Tigertree about how this all came about, “Last year Kazim had just turned four and got some money for his birthday that he immediately blew on things a four-year old would blow money on. Less than a week after his birthday, he wanted a toy that cost $30 and there was no way I was going to buy it for him, but I felt this was an opportunity to see if he would be interested in working for it. The trick was–what could he do? It’s not like he could get a gig bartending or do some freelance consulting.”

“I found a recipe for pickles on Pinterest and everybody said they were really good. I was going to make a few jars for friends and one night Kazim asked if he could help and it all sort of clicked at once.”

So if you want to buy some pickles for a budding ‘picklepreneur‘ head to Tigertree – August 13th from 10am to Noon.

Say hi to Kazim and pony up the dough because he’ll have customers waiting.