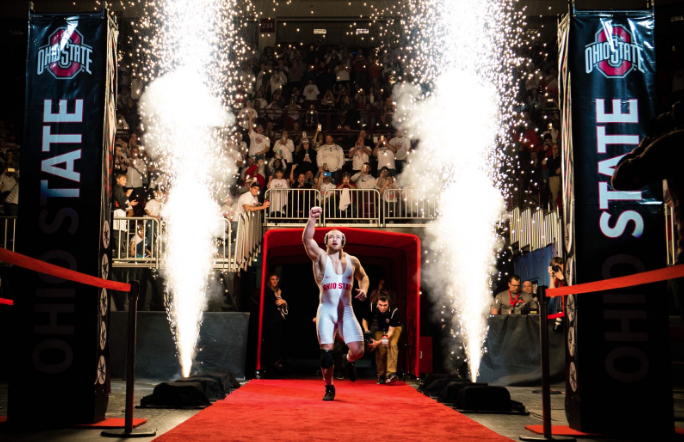 $3 per gallon in our near future but don’t freak

It may surprise people that one of the greatest athletes on Ohio State’s campus doesn’t wear football pads on Saturdays. This person might be largely unknown, unless you’re a wrestling fan and/or compete against him where he’s internationally known as a larger-than-life force: the mat. Buckeyes senior wrestler Kyle Snyder’s decorated trophy room includes two NCAA titles and a legacy-defining Olympic gold medal. This past Sunday, Mr. Snyder (aka “Snyder-Man”) entered the Schott’s center mat in-between towering fireworks like Dave Grohl at Wembley Stadium to an adoring crowd that cheered on its world-class gym rat. Fittingly for his final match in Columbus, this athletic heavyweight-class beast for the #2 Ohio State Buckeyes took down Stephen Holloway of the #4 Iowa Hawkeyes in a Senior Day atmosphere possibly unlike any other for a wrestler at Ohio State.

Buckeyes Hold Off Children of the Corn

If Charlie Sheen hadn’t made the word “winning” infamous, #13 Ohio State’s men’s basketball could make that their team’s mantra right now. Eight wins in a row and 13 victories in their last 14 games have Ohio State (18-4, 9-0) marked as one of the hottest teams in the Big Ten and the country, as well as partly responsible for our recent heat wave. The Cornhuskers gave Chris Holtmann’s team all they could handle in the Schott last night, but Ohio State pulled out a narrow 64-59 win against Nebraska (14-8, 5-4) led by 20 points from forward Keita Bates-Diop and 17 points from fellow forward Jae’Sean Tate. The Buckeyes host the Penn State Nittany Lions (13-8, 3-5) this Thursday at 8 p.m. ET on the Big Ten Network.