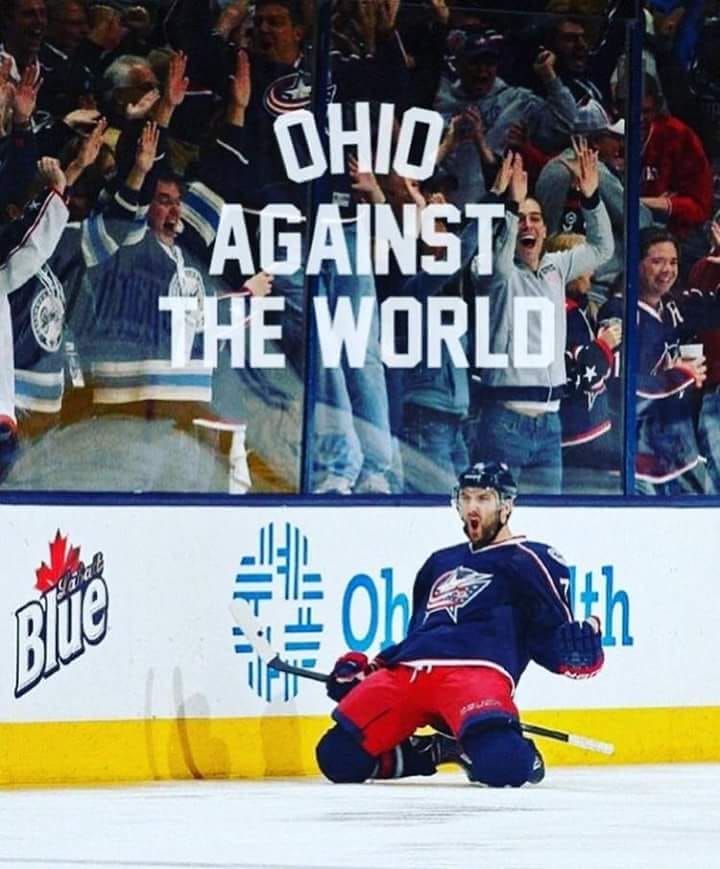 Columbus Is This Week’s Capital of the Playoff Series

Apparently, the CBJ are getting some sort of kick out of spotting the favored Washington Capitals early leads in their playoff series. In the first two games of the first-round, the Columbus Blue Jackets have produced surprising wins in D.C. by erasing two 2-0 deficits to win in OT (4-3 and 5-4). #11 Matt Calvert was the man last night as he scored the game-winner with 7:38 left in overtime.

As the Blue Jackets return to Columbus for Games 3 and 4, fans can expect a fun time inside and outside Nationwide Arena. Three hours prior to the face-off, you can partake in festivities on the Front Street plaza near the arena (no game tickets needed), including music and various attractions.

For Tuesday’s game, be sure to tune into 97.1 The Fan to hear The Common Man & T-Bone from 3-6 p.m. for CBJ coverage, as well as FOX Sports Ohio’s Blue Jackets Live with Brian Giesenschlag and Bill Davidge at 6:30 p.m.

The Columbus Blue Jackets host the Washington Capitals tomorrow night at the Nationwide Arena at 7:30 p.m. on Fox Sports Ohio in Game 3 of the first-round in the Eastern Conference playoffs.

OSU Football: There Will Come a Day to Pick the New QB

Ohio State head coach Urban Meyer is paid the big bucks (now $7.6 million/year) to recruit the best high school players in the country and then to decide the right combination of players to win the biggest games in college football.

However, considering that Mr. Haskins produced a flash of excitement for Buckeye fans against that team up north last season, his on-the-field experience may prove the deciding factor in starting the upcoming season under center. Ultimately, Urban Meyer will consult his quarterbacks coach Ryan Day to make a final decision.

For the second game in a row—and the second 1-nil loss in a row on the road—Columbus Crew SC fell victim to their own insistence to play the ball out of the back on the ground involving their goalie and backline.

Less than one minute into the game versus D.C. United in their temporary home in Annapolis, the Crew’s old school rival executed a high-press strategy to perfection. A turnover led to a goal via a volley by United’s Ulises Segura.

Despite a valiant individual effort by Crew midfielder #32 Pedro Santos that included a free-kick that hit the crossbar and a diving header that was saved, plus a burst of energy courtesy of substitute #14 Adam Jahn in the 63rd minute, Columbus could not score the equalizer before the final whistle.

Three losses in a row demand Crew SC sporting director and head coach Gregg Berhalter and Co. adjust the team’s tactics and movement on and off the ball.

Also, how many touches did forward #11 Gyasi Zardes get this past Saturday night? Answer: Not nearly enough.