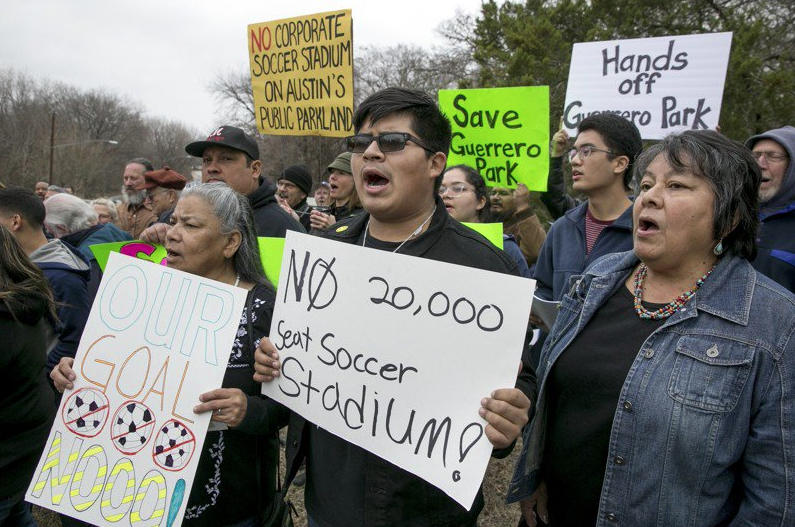 Austin is accusing their city of working hard to pave paradise and put up a parking lot. In the past month, a lot of ruckus has been stirred up about Columbus Crew owner Anthony Precourt potentially relocating the team to Austin, TX, specifically Butler Shores Metro Park. But the park-loving community has all but put a halt to that idea.

The other location on PSV’s radar is Roy G. Guerrero Park but it’s becoming less viable by the minute—or should we say…by the protest.

HANDS OFF GUERRERO PARK — Austin Residents of District 3 and neighborhood representatives from across the city gathered to express opposition of using public parkland for private development and especially Roy G.Guerrero Park as a Major League Soccer (MLS) site. Various community members spoke at the RALLY FOR GUERRERO PARK – Protect the Tranquility — Stand against 20,000 Seat Soccer Stadium Video clip includes photos from the rally & Bill Oliver’s “No Soccer Stadium (down by the river side). Rally held on Saturday February 3, 2018 – 400 Grove Blvd in the Montopolis neighborhood. Video by Librado Almanza Photos, field rercording, and edited by Rene Renteria — #montopolis #royguerreropark #austinparks

Rally against MLS Stadium construction at Guerrero Park. Protesters say the wildlife would diminish if a stadium moves in. @fox7austin

Austin residents are banning together to prevent their beloved parkland from being turned into a “big-dollar corporate concessions” as one Austin newspaper contributor called it.

An op-ed in the Austin American-Statesman and the comments on Instagram stated loudly and clearly about the city’s contempt for Precourt’s intrusive plan.

“Now that Butler Park has been removed from consideration as the site of the proposed Major League Soccer stadium, attention has shifted to an even worse idea: East Austin’s Roy G. Guerrero Park, a wild slice of the Colorado River 10 minutes from downtown that has somehow survived into the 21st century in its natural condition.”

“The very fact that our civic leaders are giving attention to  the idea of turning our riverfront parks into big-dollar corporate concessions reveals much about why so many feel Austin has lost its way in its relentless pursuit of growth.”

“In an era when cities as diverse as Houston, Los Angeles, and Munich are investing millions to restore their urban rivers to some semblance of their natural condition, Austin already has such a rare bounty in the Colorado River and the wild riverfront parks like Roy Guerrero that protect it. One can only hope that Austin will not desecrate this precious community resource by selling it out to private corporate interests.”

Those who enjoy this feed may appreciate my op-ed in today’s @statesman on the need to protect Austin’s wild parklands from being redeveloped for corporate concessions. #austin #parks #guerreropark #mls

Instead, it appears the people of Austin would rather experience Guerrero Park as it stands today and we don’t blame them—it’s beautiful.

Exactly what we needed today.

Don’t look a gift horse in the teeth