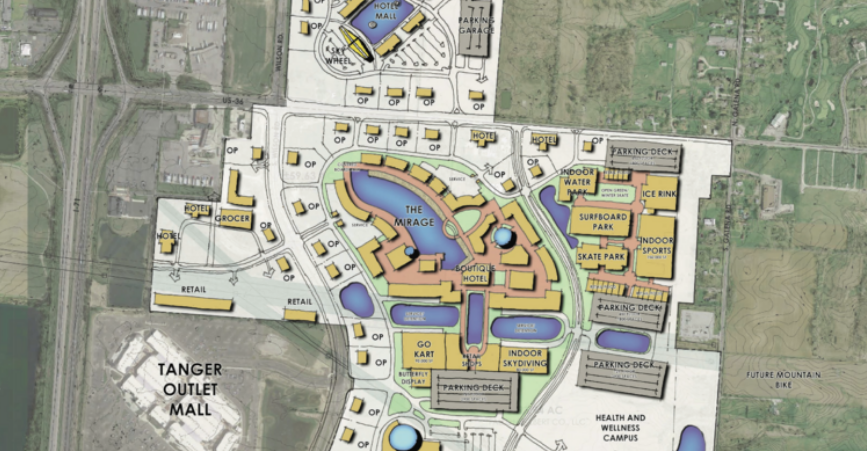 The development team behind the ambitious entertainment project planned for Delaware County has apparently gone through a breakup.

And with the dissolution of Blue Horseshoe Ventures also comes the termination of the name “Planet Oasis.”

So, we’re left wondering who will be moving forward with the unnamed, $2 billion, 350-acre complex on Routes 36/37 and Interstate 71?

According to information from The Dispatch, they both might be…?

David Glimcher, who has been the face of the project since its inception, seems to have parted ways with Tony and Alex Sekulovski, who founded Blue Horseshoe Ventures of New Albany in December 2017.

Watch Glimcher talk about Planet Oasis in the video below:

In a news release, the Sekulovskis of Blue Horseshoe Ventures said they had:

However, according to information obtained by Columbus Business First, Glimcher and a guy named Lenni Male incorporated an entity called Blue Horseshoe Development LLC last month and say they are pursuing Planet Oasis.

Glimcher told The Dispatch that he has “retained counsel that’s dealing with the situation.”

Planet Oasis is to include an indoor water park, a wave park for surfing, an outdoor lake, skate park, ice rink, e-sports arena and a shooting range, as well as spaces for go-kart racing, indoor skydiving, rock climbing, a 200,000-square-foot entertainment center with movie theater, bowling alley, laser tag arena, arcade and a “uni-coaster,” a roller-coaster-type attraction reaching 150 to 200 feet and so, so, so much more.

Think you can come up with a better name than “Planet Oasis?” Submit your ideas at BlueHorseshoeContest.com for a chance at a $1,000 Visa gift card and a chance to help cut the ribbon on opening day.

What can Columbus learn from Georgia’s reopening?

As Columbus continues to awaken from its economic slumber, many residents have voiced concerns that the re-opening is happening too early and that we risk re-igniting the spread of the virus. Our own polling has captured this sentiment and you don't have to scroll long on social media to read your neighbor's opinion on the matter.

While time will be the ultimate judge of whether Ohio's opening was premature or not, consumers, employees and business owners are cautiously stepping on the gas, but with safety always in mind.

The announcement cited the CDC recommendation of the public using facial masks in public settings to help stop the spread of COVID-19. It also noted that face masks are still not an alternative to social distancing.

"In order to best protect our beloved community and prevent the spread of COVID-19, North Market is requiring all guests* wear a mask or face covering that covers the mouth and nose at all times while at North Market," the press release state. The asterisk states this requirement does not apply to children under the age of two as well as individuals who are unable to wear a facial covering due to a medical condition.

The North Market will be taking the recommended steps per the CDC as well as the Columbus Public Health Department and the Ohio Department of Health. This includes routine wipe-downs and cleanings of areas and maintaining a six-foot-distance from other folks.

"Together with our merchants, and the understanding and cooperation of our guests, we can protect each other. Community support is essential to the future success of our merchant businesses," said Rick Harrison Wolfe, North Market's Executive Director.

If hiding away from your kiddos in your bedroom for Zoom conference calls with your co-workers has become the norm, Ologie has suggested an alternative: invite them!

In past years, Ologie—a branding, marketing, and digital agency in Columbus—has hosted an annual bring-your-child-to-work day, but with its employees working from home, it is switching gears to keep the day running. Instead of meeting in the office, Ologie has set up a day for its employees to bring their children into planned Zoom calls where activities will be set up for them.

To learn more about what Camp Quarantine will look like, 614now caught up with Dawn Marinacci, executive marketing director of Ologie.

614Now: What will the virtual bring-your-child-to-work day be like?

DM: We've celebrated this day at the office for several years now and we didn't want to miss out on the opportunity to keep it going just because we're all working remotely. We gathered up a small committee to help with planning. The day will be a mix of planned events for Ologists to entertain kids via Zoom, and other activities to do on their own with their families. With every day being bring your kid to work day right now, our hope is that this will provide points of connection, excitement, and relief for parents giving them fun activities to do with their kiddos.

What are some of the activities they will be involved in?

We've tried to organize a range of things: story time with the pups (Ologists bring their dogs to work on a normal day so everyone knows each other's dogs), science experiments, a magic show, virtual talent show, make your own popcorn trail mix, making pizza faces, scavenger hunts, recreate a famous photo, coloring contest, other arts and crafts, and Mad Libs quarantine edition. There's sure to be a few last minute surprise activities thrown in, too.

How do you see this helping lift folks' spirits and make them feel more connected during shelter-in-place?

We have a really close-knit group so we're always looking for ways to stay connected to each other through this time. We couldn't fathom not taking the opportunity to get our kiddos involved to help keep us lifted and connected. Even during our weekly company meetings, we've had a surprise little guest who joins the meeting to share what they've been doing at home. Kids bring the laughter and love we all need right now.