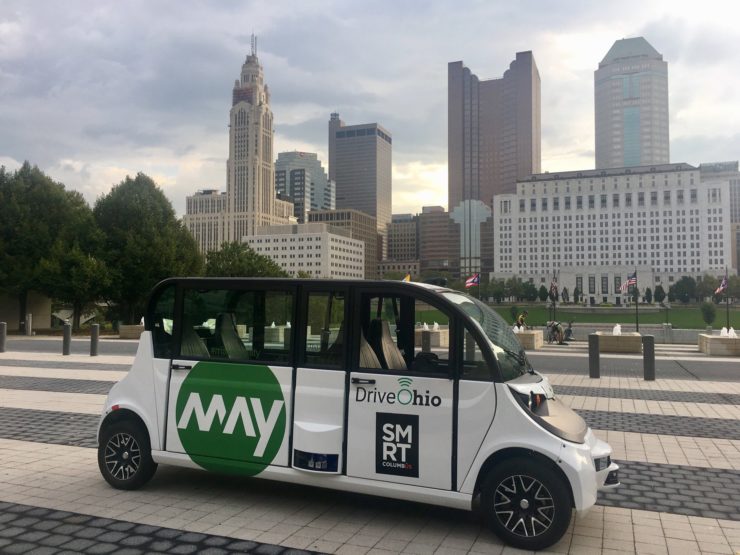 Have you gotten a chance to ride one of the autonomous cars cruising the Scioto Mile? If you haven’t, we highly recommend it.

We took a spin in one this week and learned a lot about the new driverless technology while also getting a free mini tour of the city!

We located a Smart Circuit right outside COSI and hopped aboard.

The onboard operator from May Mobility, a Michigan-based startup, welcomed us, then informed the vehicle of its new riders.

“Two passengers aboard Milo,” he said.

He later explained that each car gets its own name.

The interior is relatively small with two seats in the front, two bench seats facing each other in the back, a clear roof, and a computer censor dashboard.

Rather than a steering wheel, there’s a T-shaped apparatus which the attendant had his hands resting on the entire trip (“company policy”).

When asked how often he takes control, he said it depends on the situation, but a good example would be when a driver ahead of the shuttle is parallel parking.

The shuttle senses the car’s movement and will stop and wait for it to clear the roadway. Rather than waiting, the attendant will take control to maneuver around the car to speed things along.

The vehicles max out at 25mph but we never reached top speed.

Braking and accelerating were both smooth, but the straight-away ride was a touch bumpy.

Overall, we were very impress with Smart Circuit and quite enjoyed our experience!

Even though the route it makes is walkable, to experience the innovation we’ve achieved here in Columbus is very cool to experience and support.