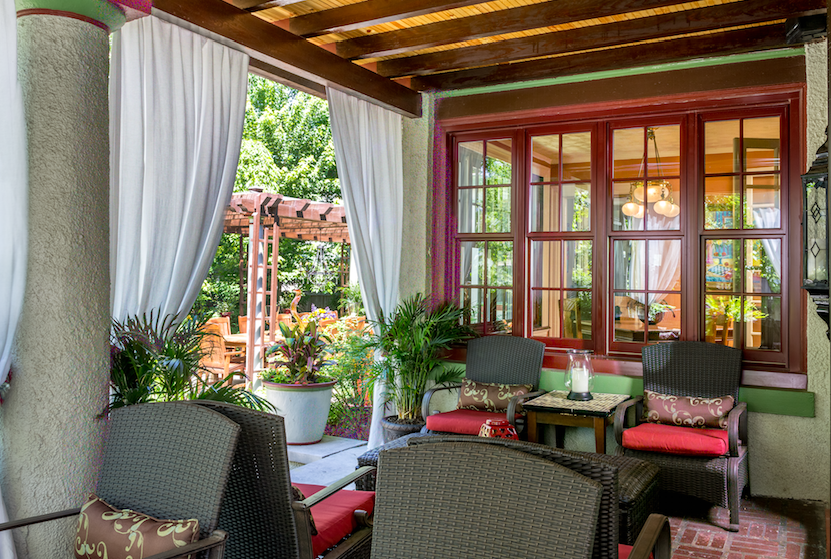 Columbus is rich in established neighborhoods waiting to be rediscovered. From enterprising hipsters handy with a hammer to young families ready to put down some roots, or empty-nesters looking to start their next chapter in life, Central Ohio offers ample opportunities for anyone willing to roll up their sleeves and turn an ordinary home on an overgrown lot into something extraordinary.

This roundup of annual home and garden tours features three novel enclaves. All started their tours for different reasons, but converged with a celebration of history, architecture, and community that brings folks together and welcomes curious neighbors — past, present, and future.

What we now know as Bexley originally grew out of two crucial construction projects that inspired the village that would become a city within a city. In the late 1800s, Capital University’s move east from downtown followed by the water and sewer systems installed to support soldiers serving in the Spanish-American War training at Camp Bushnell spurred expansion and eventual incorporation.

Among the most diverse residential tours in Central Ohio, the span of styles is indicative of period architecture over more than century, with renovations and remodeling continuing to renew the neighborhood.

As the historic center of the local Jewish religious and cultural community, the distinct identity infuses the entire area beyond the official city limits. Bexley’s robust retail corridor is also the envy of many aging neighborhoods and cuts right through the middle instead of operating at the periphery. Restaurants, boutiques, and galleries lure folks from surrounding cities, and the faithfully restored Drexel Theatre remains an art deco destination with a national reputation.

From spacious mansions to more modern and modest homes, the inner city satellite has the cohesive qualities of a small town, yet all of the advantages of an emerging Midwest metropolis just a short drive away.

Established as one of the city’s so-called “streetcar suburbs,” Westgate’s history actually runs much deeper. Built on the grounds of a Union army outpost and prison for captured Confederate soldiers, only Camp Chase Cemetery remains as a solemn reminder. An ambitious colony of Quakers also called the outskirts of the Hilltop home before the land again changed hands and was ultimately divided into several hundred plots for brisk development stretching from Broad to Sullivant from the 1920s through the 1950s.

With an initial mix of craftsman and custom homes before transitioning to early mid-century, Westgate also boasts one of the largest local collections of Sears catalog homes, including one featured on this year’s tour.

It’s not uncommon to find multiple generations of residents whose children and grandchildren return to buy homes here. Why wouldn’t they? Several schools and churches are within walking distance, a seasonal farmers market, and Summer Jam West reveal a neighborhood more connected and creative than most, with artists of all sorts adding to the quaint and quirky quality of living.

But the heart of the community is Westgate Park, with nearly 50 acres of paths, playgrounds, and picnic areas anchored by a newly renovated recreation center, all just minutes from downtown.

This turn of the century neighborhood also owes its origin to the city’s electrified streetcar circuit, making the move from downtown a practical possibility. Just a mile southeast of Broad and High, Old Oaks offered more affluent accommodations for European immigrants seeking more square footage than German Village and points south afforded, but was still close enough to their tight-knit community of schools and shops, friends and family.

Comprised mostly of mission, neoclassical, and revival “four-square” homes, with variations of Queen Anne style as well, construction covered three decades and stretched all the way to Kimball Place and Livingston Avenue.

Like most historic neighborhoods, it’s the persistence of homeowners that leads preservation efforts, always with an eye on the future. As downtown living becomes desirable again, Oak Oaks often attracts couples that prefer to own a home with ornate architectural details rarely found intact, if at all, for less than the average apartment or commodity condominium.

Among the oldest and most iconic neighborhoods in Columbus, “German Village” is relatively new. So named in 1960 for more than a century of immigrants that first settled what had been known previously as the South End, the cobblestone streets and red brick homes haven’t always been so exclusive or esteemed. Though a third of the city was once German, sentiment toward the people and their descendants turned during WWI and WWII. The once proud and thriving community fell into decades of structural and cultural neglect.

But in 1959, the restoration of a single cottage inspired the creation of the German Village Society the following year. That preservation of the past and vision for the future now celebrates its 60th anniversary.

Beyond the annual tour Sunday tour, events include a Saturday “PreTour” of homes with access to areas off-limits for the public, a cocktail reception, one of 20 private dinner parties hosted by residents, as well as two neighborhood restaurants, and an after party. Sunday brunch in Schiller Park also returns before the tour.

German Village has become the prototype for more than just home and garden tours. It’s a model for urban renewal and historic preservation working together to maintain the character of a once forgotten community for generations to come.

If a drive through the intersection of High Street and 161 feels more like New England than the Midwest, that’s no coincidence. Worthington was originally settled by families from Connecticut and Massachusetts in 1803, the same year Ohio became a state. However, it remained a tiny, self-sufficient, pioneer town for almost a century before streetcar service from downtown truly connected it to Columbus. Annexations after WWII through the completion of the outerbelt in 1975 made it a true satellite city.

But it was their sesquicentennial celebration that spurred renewed interest in preservation, prompting eight members of the local women’s club to establish the Worthington Historical Society two years later in 1955.

Unlike most neighborhood home and garden tours, Worthington has remained focused on the 19th century, but not without more recent modifications that reveal the resiliency of earlier homes. This year’s tour features seven homes, and four former residences that have been thoughtfully converted into commercial spaces, as well as the Masonic Lodge and the Orange Johnson House, which serves as the society’s museum.

Worthington has become a modern city experiencing a bit of a retail boom, including two bona fide business incubators, yet with the walking atmosphere and sincere charm of a small town at the center of its nearly two centuries of history.

From powerful politicians to titans of industry, the mansions of Olde Towne East are at odds with most inner city neighborhoods. Just close enough to downtown and stretching all the way to Franklin Park Conservatory, the stately homes offer echoes of the entire span of Columbus history and those who made it. More recent efforts to reverse decades of flight have helped preserve a diversity of architecture impossible to reproduce today, with more than 50 distinct styles dating back to the 1830s.

In fact, it was the unique challenges of conservation that gave rise to the Olde Towne East Neighborhood Association in 1975 and their first tour in 1982, as both a celebration of transformation and exchange of practical skills for period restoration.

By square footage alone, some homes seem more like castles, with three or more floors, grand staircases, intricate glass and wood craftsmanship, expansive porches, and exacting details — all the more impressive given how many were once subdivided into multiple residences and suffered years of neglect before their resurrection.

But thriving neighborhoods are more than just homes. Olde Towne East’s proximity to downtown continues to attract aspiring artists and creative couples committed to preserving its culture and community, all within a short walk from the heart of the city.