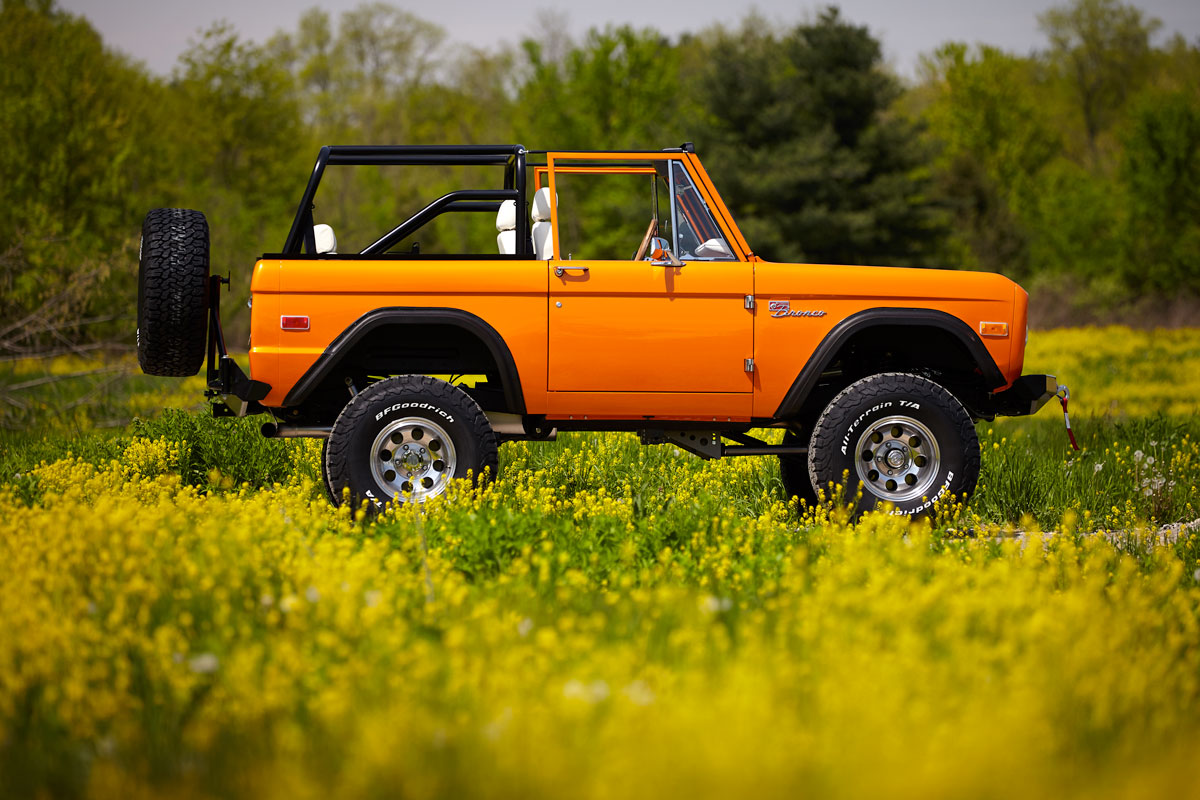 Bucolic views of rural Powell, Ohio stream past at an impressive clip as the driver presses down on the accelerator. A throaty roar issues from the exhaust. We might be going 50 mph, or it might be closer to 70—for some reason, the lack of a roof on the vehicle makes it harder to judge. (That, and and the disorienting effect of my “rock ‘n’ roll” hairstyle whipping about my face in ever-changing directions.)

The truck is a rolling anachro-nism. By all outward appearances, it is a pristine, burnt-orange Ford Bronco in the classic body style of its first iteration, produced from 1966 through 1977. But from a glimpse
of the modern suspension components underneath and the aggressive sounds emanating from the tailpipe, and it’s clear something is not as it seems.

This Bronco is a “restomod” (a portmanteau of restoration and modification) of that first-generation Bronco. It is one of between 35 and 40 that Bryan Rood’s company, the aptly-named Classic Ford Broncos, will produce in a given year. Carrying a price tag of $200,000, it is also one of the most expensive terrestrial vehicles I have ever ridden in.

Like many things a man will do throughout his lifetime, Rood started selling old Ford Broncos because of a woman.

“I was invited to the Kentucky Derby 10 years ago for a bachelor party. We were walking to the Derby with a group of girls that we met the night before,” Rood explains from his office in the Classic Ford Broncos facility near Powell. “There was an old Bronco for sale on the side of the road, and one of the girls thought the Bronco was cool, so I bought it just to try to impress the girl.”

Rood doesn’t elaborate as to what happened with the woman, but what became of that first Bronco set him on the path to a lucrative career in the automotive restoration game.

Upon returning to Columbus with the truck, Rood could not take it out without entertaining unsolicited offers of purchase. Eventually, he hit upon a deal too good to pass up, selling the Bronco which he initially purchased for $3,500 to a buyer at $8,000.

It occurred to Rood that if he could achieve this kind of return on an old Bronco, maybe he could repeat his success with another. It followed that if people would pay for an unrestored Bronco, maybe a fresh coat of paint and a tune up would up the ante.

“When I first started messing with them, I was selling them for under 15 grand,” Rood explains of his fledgling business. “It’s not that they weren’t popular, there was just a very different following for them back then. They were kind of a mud truck, or just a cheap, old, beat-up farm truck that some people thought were cool.”

Within a year, Rood had hired a full-time mechanic. Ten years on, his company employs a staff of around 15 in a 10,000 square-foot facility—the largest Bronco restoration shop in
the country.

The approach to the Broncos themselves has also changed considerably over the years, moving from restoration of engine parts, interiors and paint to all new custom bodies built in-shop, nestled on a classic Ford Bronco frame with modern performance drivetrain and suspension components included.

In keeping with advances in his process, Rood’s clientele has also changed over the years. He now marks major-league athletes and captains of industry among those for whom he’s built a Bronco. On the day I visited his operation, his crew were working on a tasteful sage green Bronco commissioned by Kelly Clarkson.

The Broncos Rood and company create are a statement piece—a summer-home vehicle for the finance set who can drop 200k on a weekend toy without batting an eye. Despite the hefty price tag, Rood explains that the owners of his restorations aren’t afraid to get his creations dirty, even if farm-field mud is swapped for sand from beaches in the Hamptons.

Undaunted by the sticker price? Interested in grabbing one of Rood’s Broncos? You’ll have to get in line—at any given time, he has a list of 25-30 customers in contract. You’ll also need some cash, as you can’t finance one of Rood’s creations—it’s a cash deal, with a 10% deposit due up front as a show of good faith.

And don’t believe for a second that your $200,000 buys the right to dictate every aspect of the build. With most of his business coming via word of mouth, Rood sees his Broncos as rolling billboards for his company. There are some things he simply will not do. No 20” rims, no wacky interiors—not at any price.