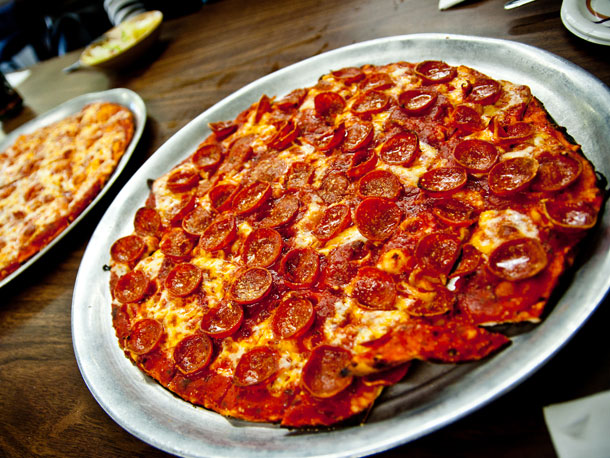 Cold weather brings a built-in excuse to stay snuggled up inside and hibernate this winter. But we want to give you every reason to go out and brave the frigid temperatures. We’ve compiled a partial list of the fine indoor adventures available to the local foodie or beer snob who wants a conquest to brighten up their winter darkness.

Here are eight of my favorite edible and drinkable tours just begging for you to embark upon this winter:

Columbus Coffee Trail: If your mittens aren’t doing the job, warm up your paws this winter with the Columbus Coffee Trail. With 23 stops around the city, this trail is guaranteed to get your heart rate and productivity a-buzzing. And not only will you be hella caffeinated when you’re through, but after just four stamps on your trail card, you’ll be the proud new owner of a Columbus Coffee t-shirt.

Dublin Celtic Cocktail Trail: Round up your best mates and hit the Celtic Cocktail Trail in Dublin. There are 11 stops (which you are strongly advised not to make all in one day) featuring such green drinks as 101 Beer Kitchen’s “Muck of the Irish,” Pins Mechanical Company’s “Leatherlip’s Revenge,” and Vaso’s “Liffey’s Cooler.” It’s like St. Patrick’s Day whenever you please! And yes, there’s a t-shirt prize involved. Slánte, lads.

Ohio Buckeye Candy Trail: Football’s not really your thing but you still want to participate in game day festivities? Skip the stadium and hit the Ohio Buckeye Candy Trail! This sweet, 31-stop adventure takes you all around the great state of Ohio to the best bake shops growing chocolate and peanut butter nuts, including seven right here in Columbus. Gotta eat on the run? Hit up the Chocolate Cafe at 1855 Northwest Boulevard for an on-the-go dozen in an incredible, edible box!

Columbus Meat Lover’s Tour: Where’s the beef, you ask? Why, on the Columbus Meat Lover’s Tour, of course! On this four-stop journey, carnivores will encounter and devour farm-fresh cuts and innovative preparations, a pair of ethnic cuisines displaying novel uses for a wide range of proteins, and a smokehouse with a long history of preparing European-style smoked and cured meats at Skillet, Thurn’s, Apna Bazaar, and The Refectory. (Vegans and vegetarians need not apply for this one.)

Columbus Ale Trail: With 40 breweries and counting, Columbus boasts one of the booziest craft beer scenes in the Midwest (next, the world!). We don’t want you wasting precious porter time behind bars, so queue up the Uber, lushes, we’re going Columbus Ale Trailing! From sours to sasions, rooftops to restaurants, you and 2,370-ish of your closests friends will crawling your way through the tipsy trail and gathering prizes along the way.

Ohio Ice Cream Trail: You’ll scream for the two local scoop shops on the Ohio Ice Cream Trail. Our very own Jeni’s Splendid Ice Creams at 714 N High St, Columbus and Johnson’s Real Ice Cream at 2728 E Main St, Bexley landed themselves a spot on the highly-coveted 20-stop list. Unfortunately, there’s no prize for completing this trail, but a t-shirt is moot compared to the joy a few scoops of ice cream can bring you.

Ultimate Pizza Road Trip Across America: On an ambitious mission to find the best pizza in the United States, a national blog known for its “best of” lists uncovered two saucy gems right here in Columbus. Rave Reviews took their readers around the country to find the 50 best pizzas and it just so happens that two are located right here in the (614). Rubino’s Pizza and Mikey’s Late Night Slice are both slivers in the pie that is the Ultimate Pizza Road Trip Across America.

We partnered with Brown-Forman, Jack Daniels Rye Whiskey, and local bartender Ben Griest from Giuseppe’s Ritrovo to bring a fun twist to your summer cocktails. Rye in July is your go-to weekly drink feature to make while stuck at home for ideas of cocktails. This week, we feature a Boulevardier Cocktail recipe that will surprise you every time, because it relies on Jack Daniel's Single Barrel Rye, and every barrel has its own unique flavor! Also in this drink? Campari, Sweet Vermouth, and an orange swath garnish.

The four above-mentioned food trucks will be at the Commons Thursday, July 16, from 11 a.m. until 2 p.m.

In order to safely socially distance, orders must be placed ahead of time through Street Food Finder. Guests are asked to wear a facial covering when picking up their order. Head to the Columbus Commons website here to find out more information on food truck availability this summer.