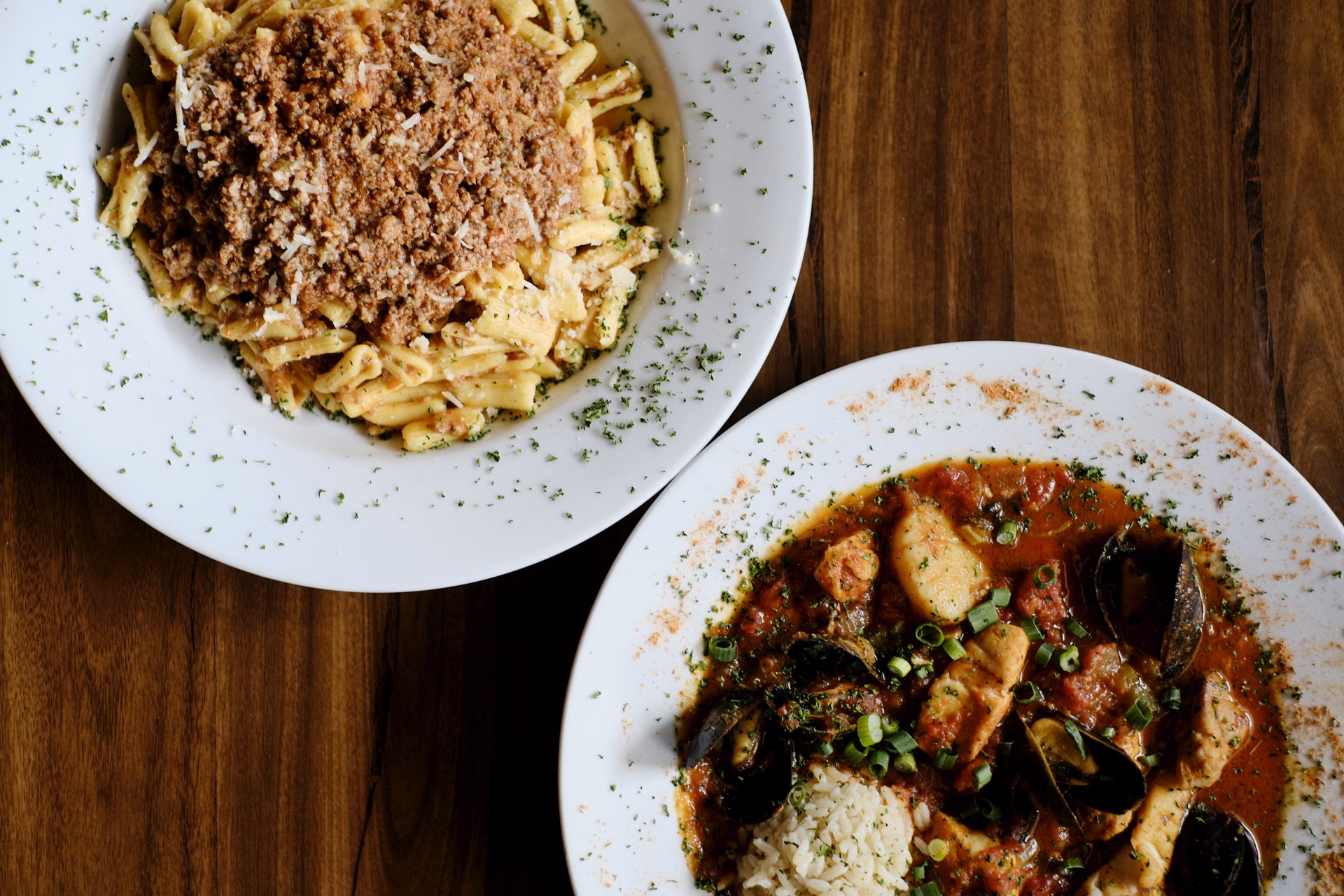 Columbus has no shortage of neighborhood favorites or local watering holes. All the hip locations such as Italian Village, Grandview, German Village, and Clintonville are full of their own local flavor. However, one neighborhood nook is as unique as it is hidden, and it just so happens to serve up flavors that are hard to find anywhere else in town.

Nestled just east of Riverside Drive in Upper Arlington, Gallo’s Kitchen and Bar is a friendly neighborhood joint that aims to please a diverse crowd. “I wanted to open a place where everyone is welcome and everyone feels at home,” explains head chef and owner, Tommy Gallo.

While the inviting atmosphere has won Gallo’s a loyal base of return customers, the restaurant’s menu is perhaps a little eyebrow-raising for first time patrons.

“This restaurant is quite a niche,” says general manager Jamie Hodder. “How many places are doing Creole, and how many are doing Italian as well? I don’t think anybody anywhere is doing that.”

The choice to offer cuisine from two separate traditions is a reflection of Gallo’s own path through the culinary arts. At the beginning of his career, Gallo trained under chef David Russo at Akron’s Liberty Street Restaurant. For a time, Russo was Emeril Lagasse’s right hand man at the celebrity chef’s New Orleans restaurant, NOLA, and passed his expertise from that experience on to Gallo.

“Tommy can execute as well as a lot of restaurants in New Orleans,” Hodder boasts. “I’ve been fortunate enough to go down there a few times, and it has really made me appreciate the food that comes out of our kitchen. It’s as good as a lot of places in New Orleans.”

In addition to Russo’s invaluable guidance, Gallo’s cooking was influenced by his family from an early age. He recalls spending time in the kitchen with his parents and grandparents growing up, and inherited his marinara recipe from his father.

Whether it’s his Italian heritage or the influence of his mentor, the desire to pay homage to his roots is the driving force behind Gallo’s approach to his restaurant’s menu. An entrée that manages to combine his two main sources of inspiration is the Pasta Russo, a classic Italian dish named for the chef who gave Gallo his start.

“I started at the bottom of the line and worked my way up,” Gallo reminisces of his early days working under Russo. “Dave gave me a lot of freedom and that experience helped shape my culinary style and philosophy.”

Pasta Russo consists of a flavorful and hearty Bolognese sauce, combining veal, beef, and pork, served over cavatelli pasta. “This one took me a long time to master,” says Gallo. “If I named it after Dave, it had to be perfect.”

Given the menu’s Louisiana leanings, it’s no surprise that one of Gallo’s own favorite entrées is the Seafood Creole: a gluten-free dish that consists of assorted sauteed seafood served over rice and finished in a rich tomato Creole sauce.

“I take the quality and freshness of my seafood very seriously. In fact, the fish you are eating today was more than likely swimming yesterday,” he explains. The emphasis on freshness extends to every ingredient at Gallo’s, from wing to filet.

Other classic Creole entrées worthy of consideration is the jambalaya. With Gallo’s own tasso ham, andouille sausage, and chicken, it’s the kitchen’s spiciest dish, and the perfect comfort food for colder days. A bit more complex, the Chicken Etouffée features chunks of chicken served in a ham shank roux-based gravy.

Quality and variety keeps the neighborhood regulars coming to Gallos’s. That, and snowstorms. In 2013 during a particularly bad storm, Nottingham Road, on which the restaurant is located, became the only accessible roadway because of a COTA bus stop which had to be cleared. “That snow storm really boomed our business and turned a lot of neighbors into regulars,” says Gallo. “Thank God for the snow.”

The classic wooden bar offers plenty of space to share appetizers with friends during the game (polenta and arancini recommended) or to feast on a sandwich. If the sports bar vibe isn’t your thing, make reservations in the dining area for an intimate date night or drinks and dinner with friends from the office.

While the Creole-Italian mashup at Gallo’s may seem odd at first glance, the passion and exceptional skill behind the cuisine is sure to win over any skeptic. With the warm, welcoming environment that Gallo has cultivated, it’s easy to see why the establishment is growing as one of the city’s favorite hidden gems.

Gallo’s Kitchen and Bar is located on 2820 Nottingham Dr.
For more details on hours, visit galloskitchen.com