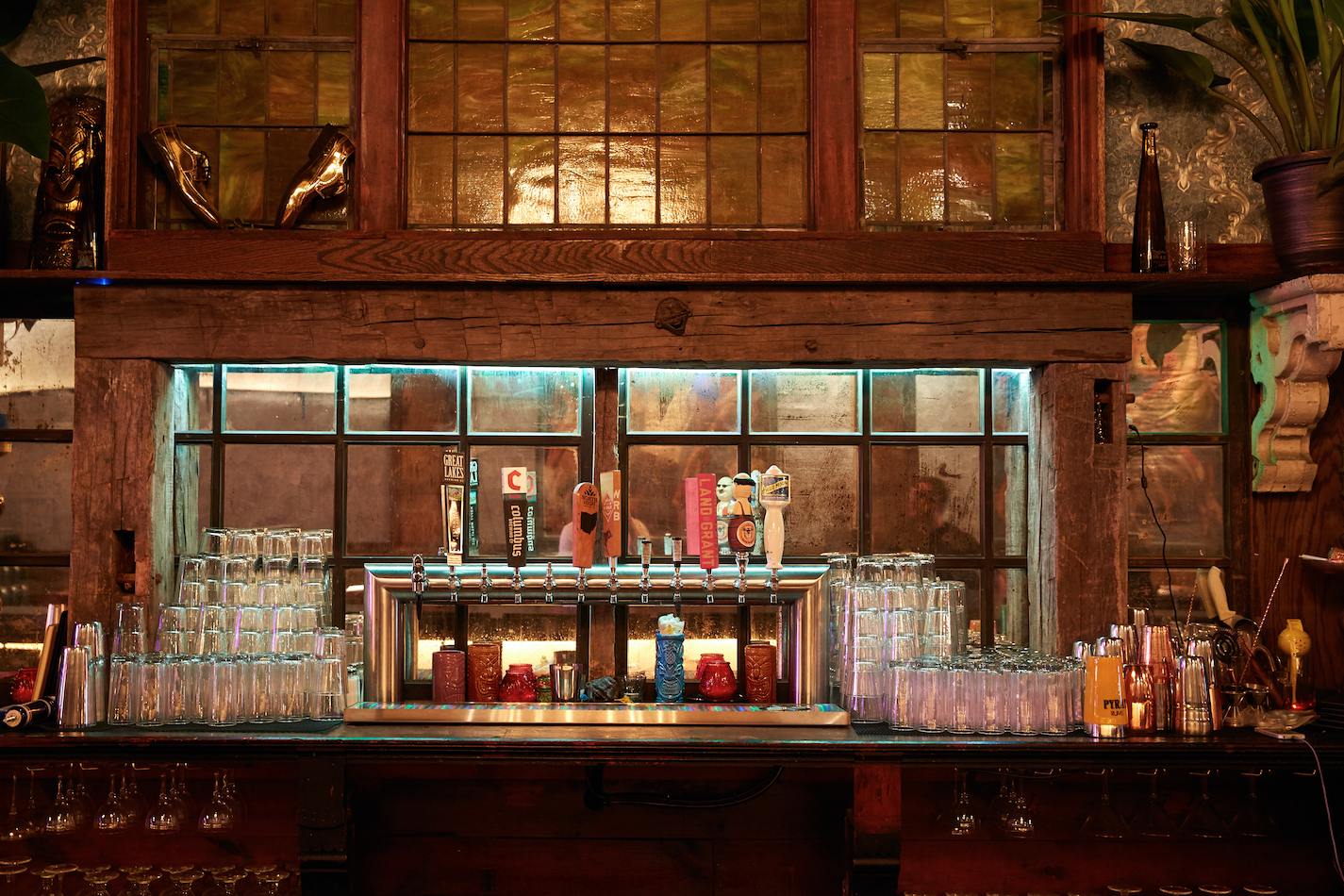 Seventh Son Brewing has become something of a Columbus staple. Nearly any night of the week you can find its Fourth Avenue taproom bustling with patrons, enjoying food truck fare in the summer months and huddled around an outdoor fire pit in the fall and winter.

And while the brewery deserves all the acclaim it receives, don’t let that overshadow what might just be your next favorite cocktail bar: Duecento.

I say this because it’s pretty easy for that to happen. At least from a physical perspective. An abandoned building turned chic new watering hole, Duecento still maintains its humble roots from outside the building. The single-story edifice doesn’t look all that exciting or appealing from its Italian Village location, but looks can be deceiving.

“I am a renovator and designer, and I’m a landlord also. I was working on a house that’s in this area for a while and would always pass the building [that became Duecento] on my drive home from work,” says co-owner Andrew Losinske. “So I’m looking at this abandoned building every day when I’m going home, and I thought to myself, ‘That could be a great little workshop.’ ”

After six months of slipping his contact information under the door of the derelict site to get in touch with the property owner, he took over the location. And for awhile the now-cocktail lounge was more or less a space for him to store his tools and churn out some off-site work.

By chance, Losinske’s friend and current business partner Ted Lawson happened to stop by to meet up before heading across the street to Seventh Son to grab a beer. Lawson, who now lives in Florida, is an accomplished bar and drink lounge owner, and immediately recognized that the spot’s interior was dripping with potential.

And the rest is history.

After several years of renovation (much of which Losinske handled himself), decoration, and permit applications, the cocktail lounge opened on February 2, 2019, with Losinske and Lawson at the helm as co-owners, and a small but tight and enthusiastic staff behind the pair.

From the moment newcomers enter through the building’s small, modest front door, its interior has them absolutely hooked. Don’t lie. We’ve all seen the moment in the movie Spice World when the band steps into their seemingly regular tour bus, and the shot jumps from outside the vehicle to inside, when the group is magically transported into a mansion several stories tall.

Walking into Duecento feels distinctly like this. From the outside, the humble single-story building still feels under decorated and even slightly lonely. Its exterior retains a bit of the defunct quality that plagued it for so many years.

However, once you step inside, everything changes. You enter a sleek, almost cavernous spot, sporting 3,000 square feet, with 14-foot ceilings and a pleasing mixture of vintage and contemporary decoration, favoring handsomely polished wood and low, soft, moody lighting. It’s the best “Ta-da!” entrance in Columbus I’ve ever come across.

Don’t get things twisted though, even with a less-than-bright interior and high ceilings, the centerpiece of the chic yet still-comfortable cocktail bar is its row of massive, ornate chandeliers, providing the space with an aura of classical charm without throwing its style out of balance.

And while the venue alone might be worth a visit for anyone who wants to feel like they’ve just discovered a hidden gem (which they have) or a secret, trendy speakeasy, the drinks are worth staying for. Duecento won’t overwhelm you with variety, but that’s so their focus remains on making their compact menu of streamlined cocktails (all laced nicely with a quiet Italian theme) quickly and well.

Duecento’s cocktail menu was largely created by drink consultant and Columbus cocktail veteran Christina Basham. It will soon be releasing a seasonal warm weather menu, but is still retaining most of its best-sellers.

For the new Columbus hotspot, its most popular drink is also its most unique. The 200 (a nod to Duecento’s name, which means 200 in Italian, and its location at 200 E Fourth Ave.), is made up of OYO Vodka, Nux Alpina, pomegranate, ginger, and lime. A delicious drink in itself, what sets the 200 apart is the fact that it’s poured to patrons from a draft line. And although some cocktail veterans might initially balk at this idea, both Basham and Losinske stand solidly behind them.

“Putting cocktails through draft lines can be a huge win-win,” says Basham, who noted that the trend of serving draft cocktails is catching on as a trend in Columbus and beyond. “The quality of the drink is there [at Duecento], and this ultimately cuts down on the amount of prep time for servers, plus customers aren’t waiting long at all.”

Losinske agrees. “We love serving cocktails from our draft lines,” he says. “And service here is extremely important to us; it matters that customers aren’t waiting 20 minutes for one drink.”

Also on draft is Basham’s flavorful take on the Negroni, and the bar serves several made to order options as well. These include (with some subject to change, likely this month) a black Manhattan, a gin and tonic with Pasubio, an old fashioned, and a Margarita with Aperol, providing the drink with an earthy, dynamic new twist.

What you won’t see at Duecento though, is a list of cocktails that goes out the door. And that’s on purpose. Basham, an experienced mixologist who runs her own consulting service (Bubbles + Agave) is an outspoken advocate of keeping things simple. This includes a streamlined menu and drinks that don’t contain a litany of ingredients. It leads to a reduction in prep time, she says, lends to clarity of flavors, and makes it easier on servers and patrons alike, reducing the time it takes to make any one drink.

Duecento also offers a variety of other beverages, such as craft beer, spirits, wine, and more.

As its likeness with an underground getaway or 20th-century speakeasy suggests, the atmosphere inside is effervescent and fun- loving. It features live music in its DJ booth, plus a spacious dance floor and a set of beautiful red-felted pool tables.

“It can be calm at times too, but on the weekends people here like to get loose,” says Losinske. “They like to turn the music up and dance, and we like to let them.”