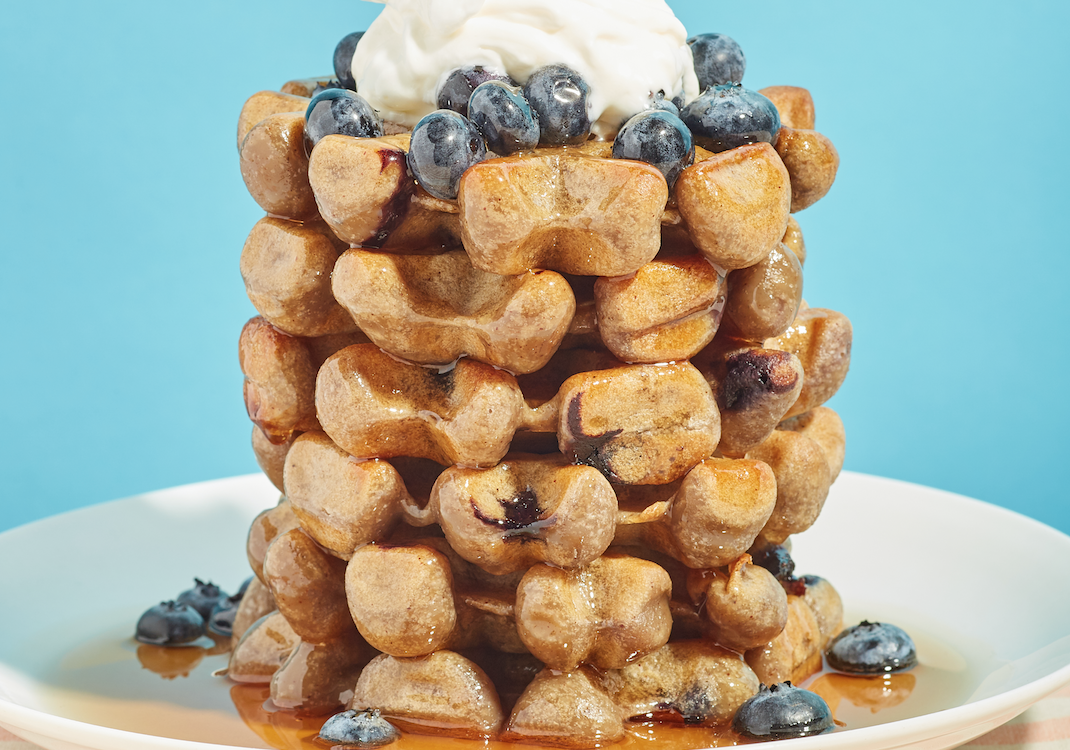 Stacie Skinner doesn’t look like a superhero, but to parents whose kids have food allergies, she’s only missing a mask and a cape. With a secret identity as astute as Bruce Banner and mild-mannered as Peter Parker, her background in retail planning and food industry R&D revealed a hidden superpower.

No one was making really good gluten-free waffles. (Well, she was, but no one knew it yet.)

“I wanted to have my own business, and I knew it would be gluten-free, to accommodate some of the allergies that affected my family,” Skinner explained, whose own childhood memories of cooking with her mother in Lopaus Point, Maine inspired more than just the name of her company. “I thought local farmers markets would be a great place to try out my recipes. But when I started, it was mostly cookies and breads.”

Families with food allergies have to travel a little differently than those who don’t. You can’t just eat anywhere along the way. This writer also happens to have two kids who have issues with both wheat and milk. Before the proliferation of gluten-free and dairy-free options at the average grocery or restaurant, we had to bring all of our food with us. We didn’t simply pack for the weekend. We had to pack like we were going to the Moon.

Skinner’s breakfast staple epiphany similarly came during a family vacation, staying in a hotel room with a kitchen, as many food allergy families often do. Even if you plan to prepare most meals yourself, you can’t pack everything—particularly a waffle iron.

“I bought a box of frozen gluten-free waffles for my son to have while we were there. But when he made them, he held them up to the light and they were so thin, he could see through them,” she recalled. “Then when he ate one, he said they were “disgusting” and asked, ‘Why don’t you sell your waffles?’”

Every superhero has an origin, and it doesn’t have to be as dramatic as gamma rays or a radioactive spider. Skinner followed her son’s suggestion and decided to try selling her waffles at the farmers market, which for aspiring food entrepreneurs is often their first and most effective focus group.

“My other baked goods were selling well, but they weren’t as unique. There were plenty of gluten- free products on the market that were sweet, but not necessarily wholesome,” she noted. “So I decided to let everything else go to focus exclusively on the waffles.”

“I knew the waffles would be a meal component, and hopefully a snack. I felt like they needed to be made with better ingredients that were nutrient dense,” Skinner revealed. “A lot of gluten-free products are simple starches, sugar, and something to bind them together. I wanted these to be more.”

Soon Banana Flax led to additional flavors, like Wild Blueberry, Chocolate Chip, and yes, Pumpkin Spice. A vegan version is among the most frequent requests, and already in the works. Free from most major allergens, raving fans and demand quickly grew beyond just gluten-free customers and local groceries.

“Retailers are used to products that have a crazy shelf life—like two years for some frozen foods. I don’t understand why anyone would have six delicious waffles in their freezer for two years,” she chided. “It’s why partnerships became essential, and I was lucky to have a supportive, local community of fellow makers to guide me.”

That’s when the collaborative culture that binds Columbus became baked into Lopaus Point. Instead of the cutthroat culture common between competitors in most cities, Skinner actually found mentorship among established gluten-free businesses, offering advice and insights on how to grow smarter, not faster. Bake Me Happy, which has their own gluten-free bakery, even sells her waffles. How’s that for an endorsement?

“Just because you’re avoiding an allergen, it doesn’t mean there’s a compromise in your tastes,” she explained. “We think this is the product people deserve, and small makers help create these new markets and can often right the wrongs of big companies whose early attempts fall short.”

Starting a specialty food company in Columbus also happened to be its own happy accident. Skinner’s earlier career brought her from Boston. But after meeting her future husband here and time spent away from Central Ohio, it wasn’t our test market credibility that convinced them to return. It just felt like home.

“Our kids were getting old enough and almost ready to start school, so we moved back to Columbus. It was the only place we both had in common, even though we had no family ties here,” she recalled. “We loved it so much and knew it was where we wanted to raise a family.”

Still very much a local brand, Lopaus Point recently launched a mail-order option for folks beyond the Midwest and East Coast reach of their grocery distribution. Skinner discovered many of her customers not only order for themselves, but as gifts—for someone who may have just been diagnosed with an allergy to college students who still struggle with dining hall fare. There’s even a subscription program. Automatically getting a big box of waffles in the mail every month might be the best thing since Netflix.

Staffing also sets Lopaus Point apart. Their first kitchen was a shared space that worked with Franklin County to provide opportunities for adults with developmental disabilities that too often limit employment options. Now nearly a quarter of her staff have similar challenges, working in roles from preparation to packaging. It was the final ingredient Skinner realized she was missing.

“I knew my company had to be bigger than just a product, and our special needs staff are an integral part of our entire operation,” she explained. “We’re not just serving customers whose dietary needs are often overlooked. It’s also about providing opportunities for people in our community whose potential is overlooked as well. At Lopaus Point, we want everyone to feel included.”