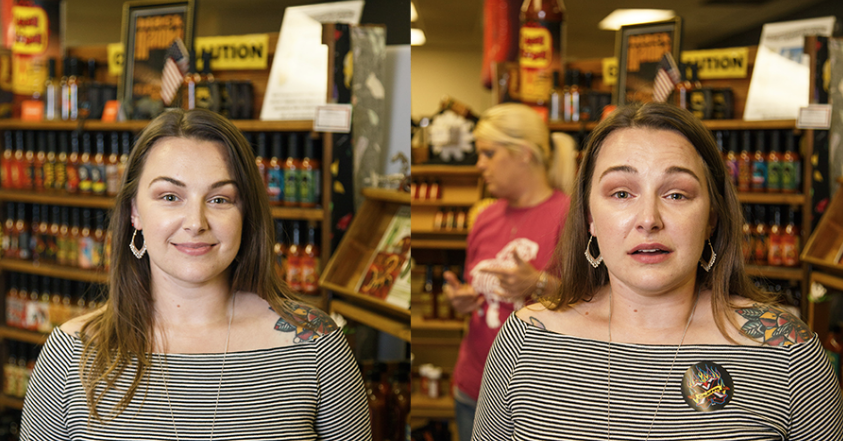 In time for the Fiery Foods Fest this weekend, we are reintroducing the CaJohn’s “Execution Station” challenge that (614) staffers so bravely faced back in 2017. Can you take the heat?

I love a challenge. Even challenges at which I know I will fail. On the surface, this sounds like a positive attitude. But what people often neglect to consider is that being habitually dissuaded from out-of-reach conquests often results in spectacular, crashing failure.

Highly averse to spicy food from a young age, I began acclimating myself to the hot stuff about four years ago. Little by little, my heat ceiling was raised. I started getting a little cocky at restaurants and asking for higher and higher levels of spice, pushing my boundaries just a little bit at a time.

My ability to taste new flavors in different peppers increased. Soon, I found my friends could not sample my food when we went out to eat. I found myself chasing the burn.

I decided to take on a fiery foods challenge for a story, and rounded up a small crowd of “volunteer victims.” Some friends and co-workers who had a predilection for spicy foods agreed to meet me at ground zero and take a taste bud journey through ascendingly heated hot sauces. 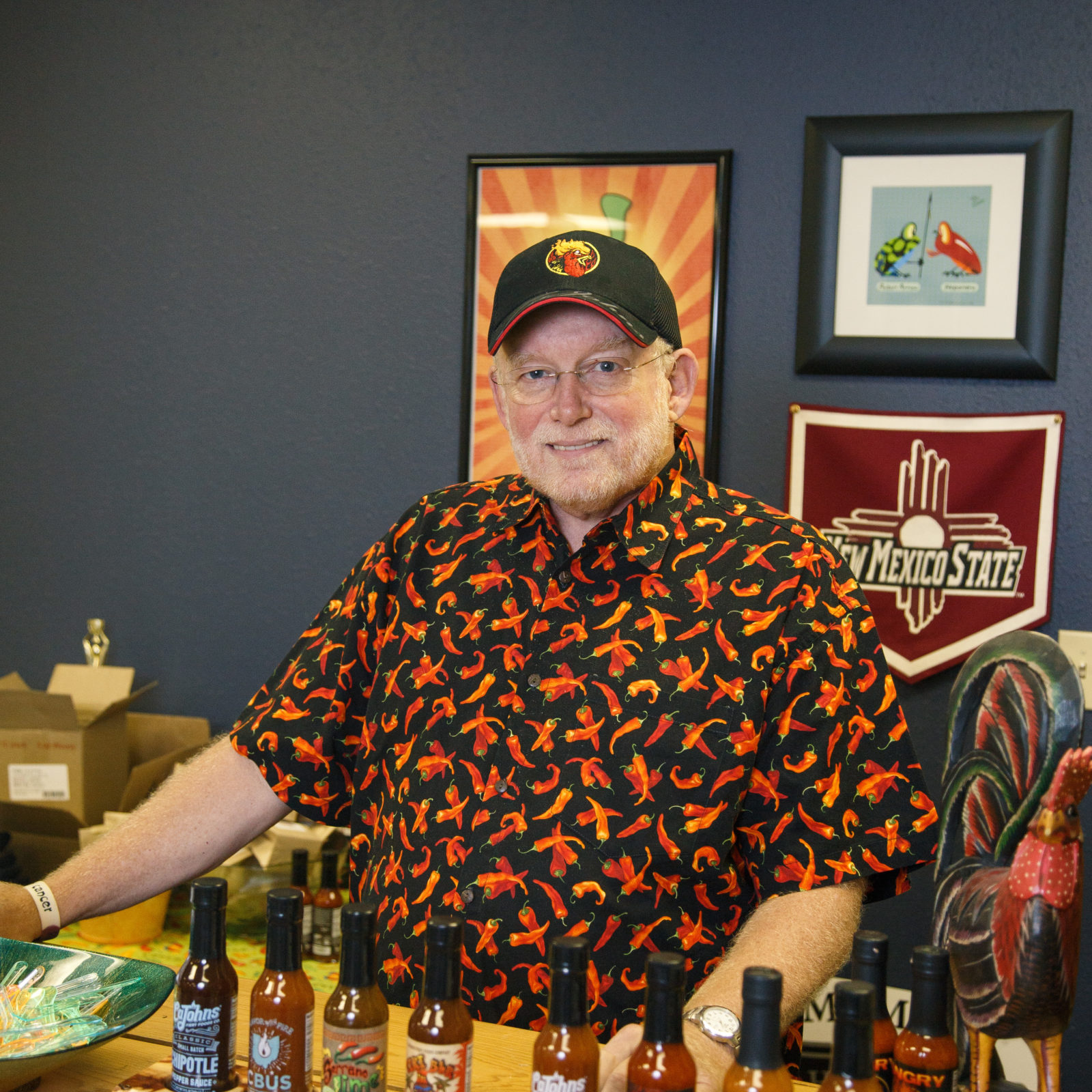 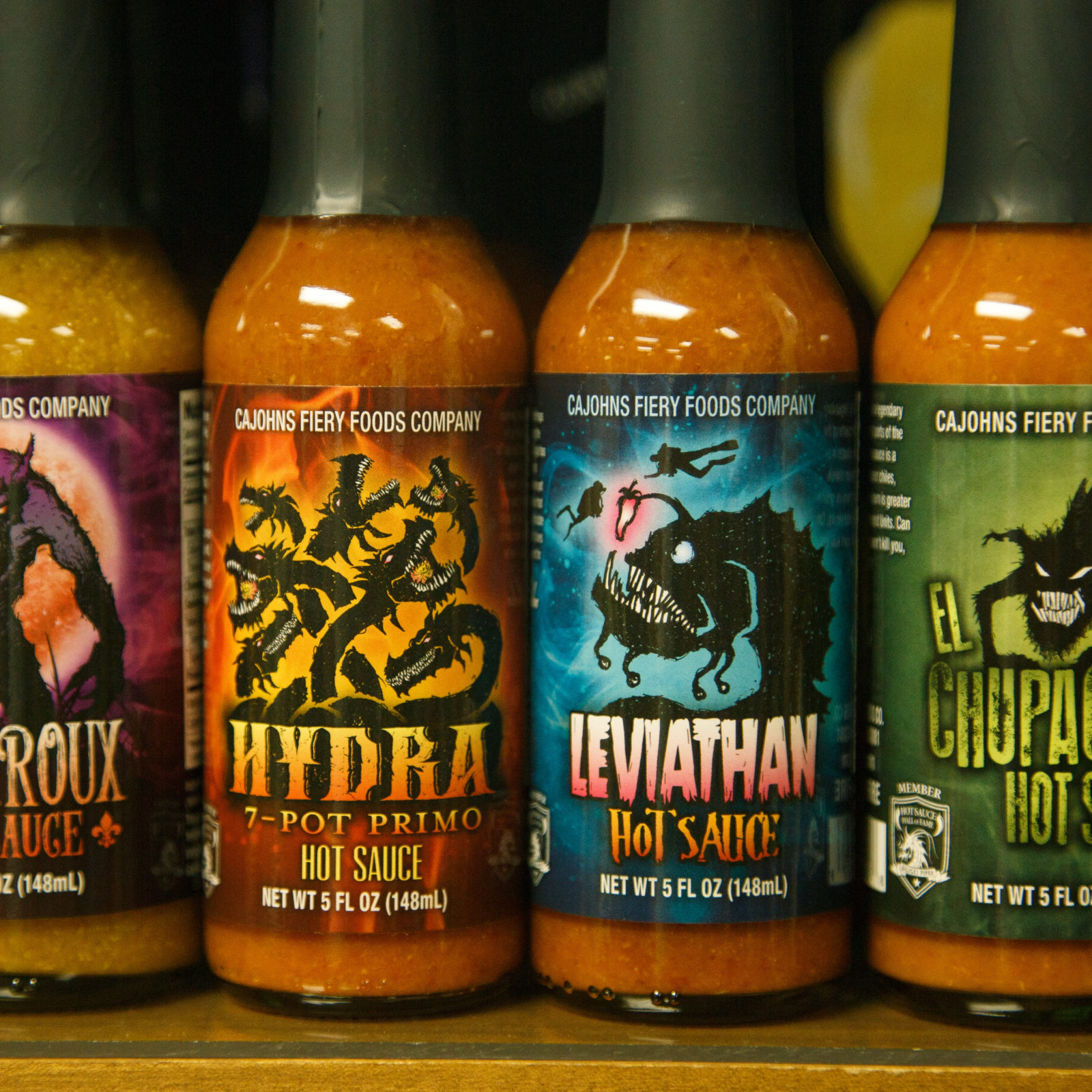 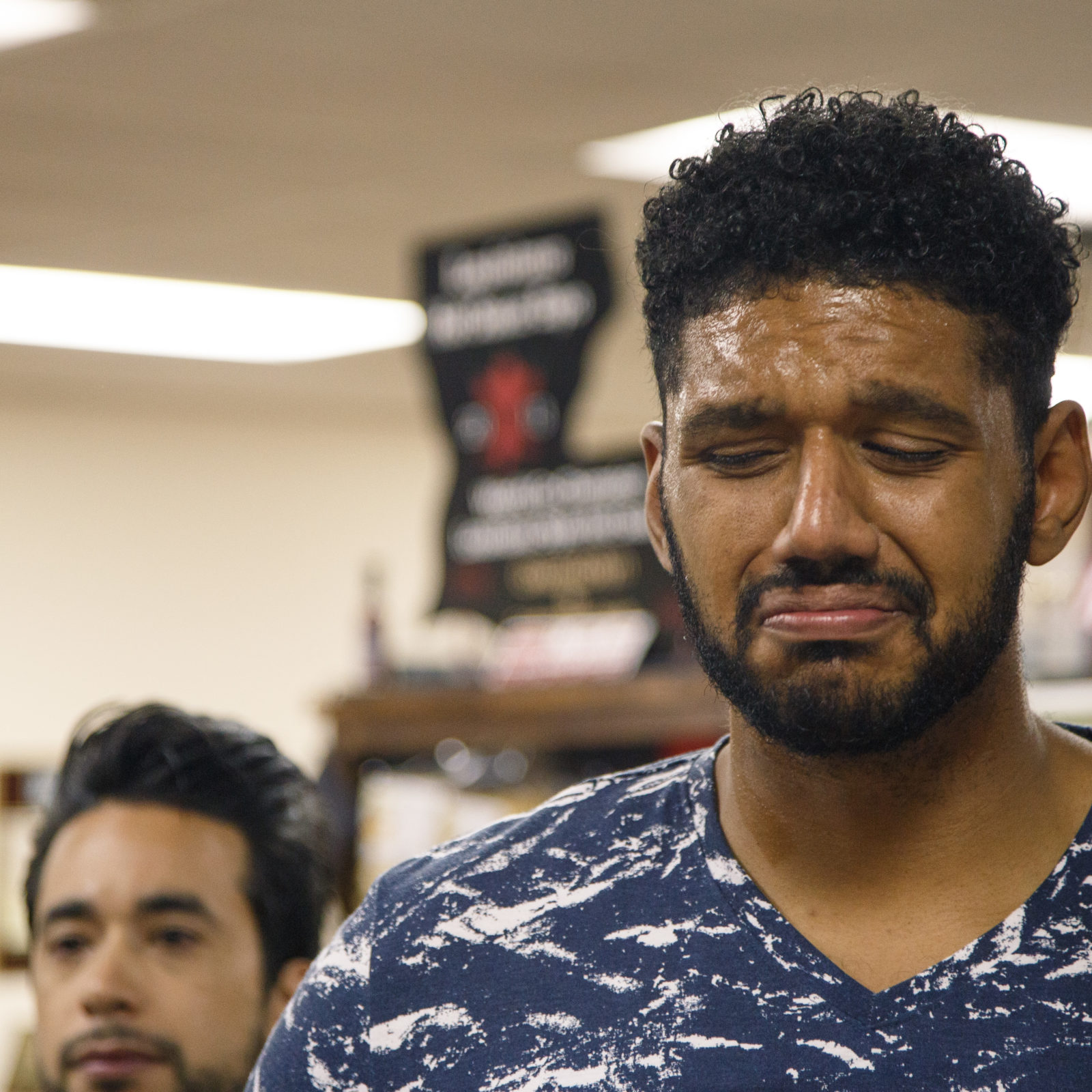 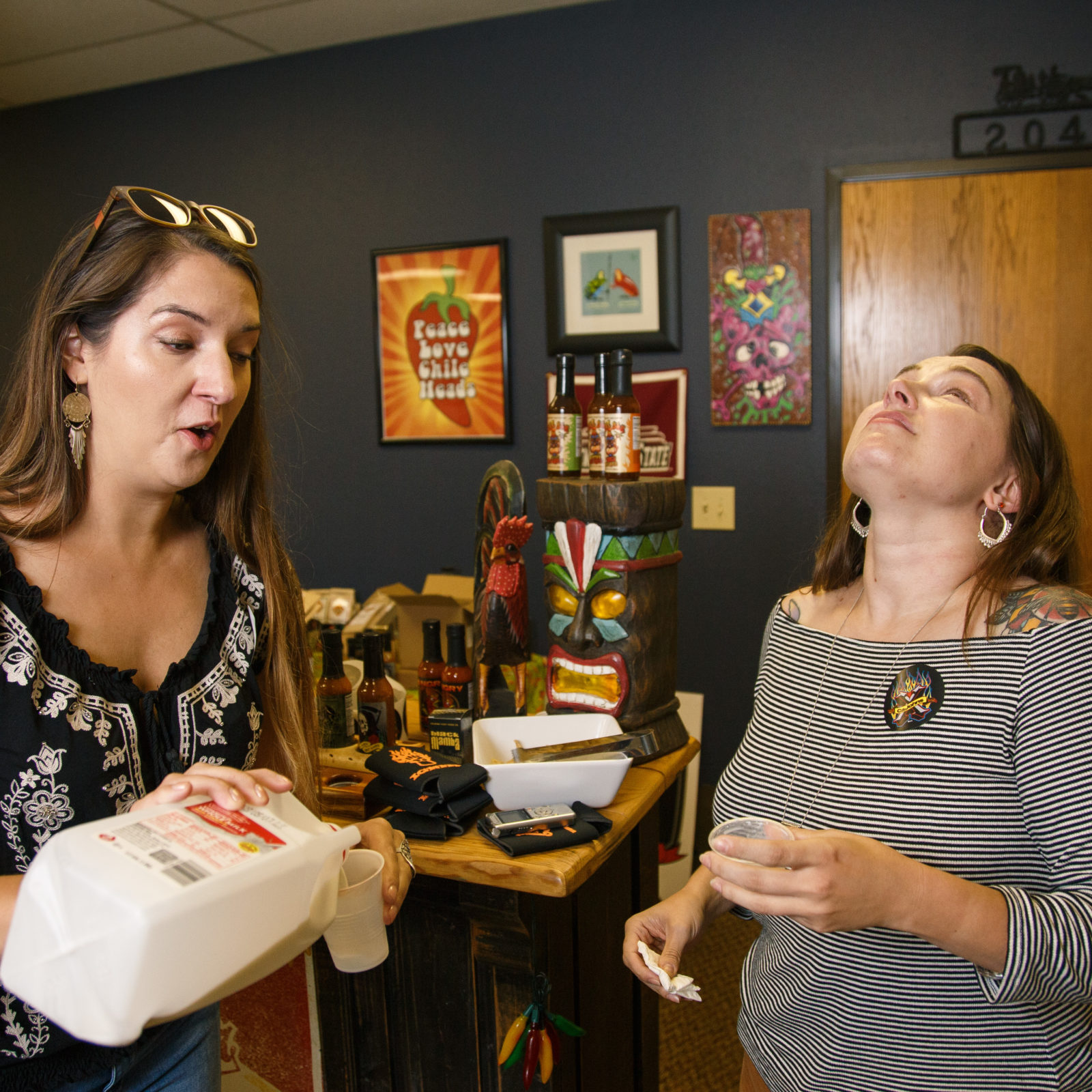 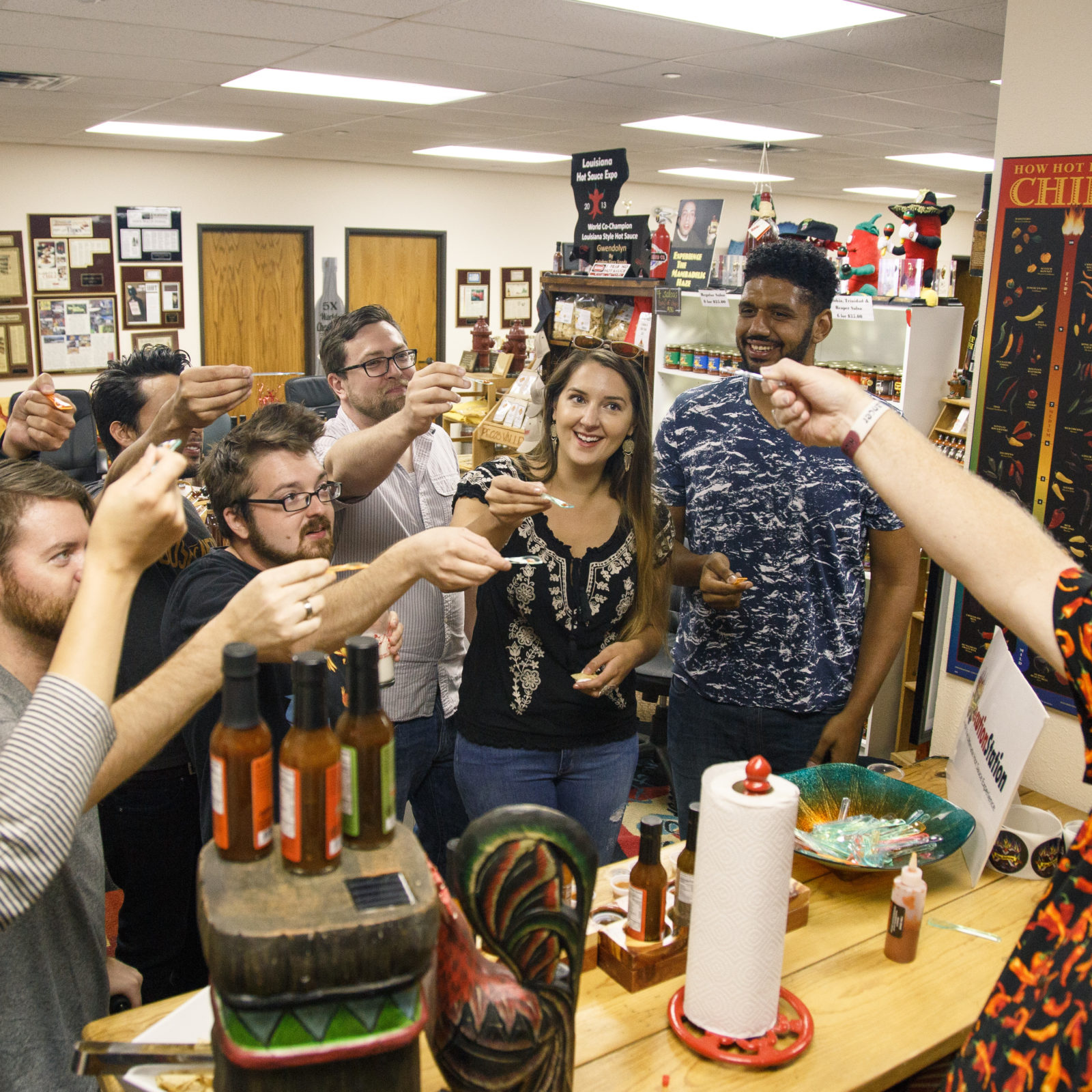 I thought it best to seek the advice of a professional. Dustin “Doc” Cordray is my go-to answer-man for this piquant excursion. A member of the CaJohn’s Fiery Foods team, Doc is a seasoned professional when it comes to sauces, rubs, and soup bases. (See what I did there?)

The first thing we talk about is how to stop the pain.

When you’re first starting out and you’re not accustomed to hot things, it registers as pain. Why do people chase that?

There’s a gentleman named Jolokia Jonathan. He is a recovering drug addict and alcoholic. He actually will come into our store, buy the hottest hot sauce we have, and he will drink it because it gives him the same high. It doesn’t hurt him, it doesn’t even phase him, but he still sweats, he still gets the heat hiccups…. If you’re eating something really really spicy and you want to stop the pain, you can actually take packets of sugar and put it on your tongue and let it sit for a minute. Wait until the heat comes back, swallow it and do it all over again.

We always hear about the new hottest pepper, so why does it keep changing?

Pepper growers cross breed peppers. The world’s hottest pepper is now a cross breed. It’s the Carolina Reaper. It’s the current world’s hottest according to The Guinness Book of World Records. But if you ask the Chili Pepper Institute, it’s still the Trinidad Scorpion.

I’d think it would be a good marketing tactic to always have the world’s hottest pepper at any given time.

We do always have the hottest pepper, and that’s because we’ve been in the business for 20 years. We’re actually America’s most awarded hot sauce and salsa company. So people actually come to us with peppers and they ask us a lot of questions. The hot sauce community is very friendly and we will work with each other.

Is this a branch of nerddom?

Yes, this is a branch of nerddom, they call themselves chiliheads. They’re big nerds. There’s hot sauce bloggers, there’s pepper bloggers. They get together at hot sauce shows, they all know each other.

How can someone prepare if they’re going to do a marathon of spicy food?

A lot of people will do spicy food before they do a challenge… Not super spicy food, but something that has a good amount of heat to it. Something that has a nice glow. Or you can eat [raw] peppers. A whole bunch of jalapeños or habaneros just to get your tongue ready for that. There’s a cheating method, too. (Editor’s note: oral lidocaine spray) You can spray it on your tongue and in your mouth, and if you eat something spicy it won’t [feel] spicy.

Why do you think people compete and do these big shows?

Because it’s fun. We have a challenge, it’s called the “Execution Station.” We line up some of our hottest hot sauces. You have to go through each hot sauce, and you can’t break the rules. No complaining. You have to have a whole spoonful, not a drop.

If you can make it through all the rules and all the sauces, you get a koozie, and it’s good for 10% off at our store. But if you can do the challenge, which is doing Black Mamba Six at the end, you get a sticker. You’d be surprised how many people want that sticker. At hot sauce shows, almost every booth has a stupid hot hot sauce, and they have a sticker.

I don’t want to throw up.

With our execution station, we always have a trash can at the end. Just for that random person. Because it happens every once in awhile. It doesn’t happen as often as you would think, but it does happen. For that person who didn’t have enough to eat, or had too much, or had too many beers.

Is Black Mamba Six the hottest hot sauce in the world?

What’s gonna happen if I try the Black Mamba Six?

The great thing about Black Mamba is that a lot of people will try it and they’ll go “Oh that’s nothing.” And then they’ll go away. And then a couple minutes later they’ll come back in tears, with a red face. I hear a lot of “I hate you.”

Hurts So Good: A Fool’s Errand

The only tears shed at CaJohn’s Fiery Foods headquarters in Westerville, and their booth at the North Market are self-imposed. People love the burn of their spicy condiments.

Of course, CaJohn’s makes more than just hot sauces, they make spice rubs, soup mixes, mustards, and other flavor-packed seasonings. And they do it all by hand, right here in the ranch dressing belt.

As the most awarded hot sauce company in the United States, CaJohn’s is an authority on making eyes water.

When we rolled in 10-deep and asked for his hottest, he brought the heat. Together we attempted “The Execution Station.” This is a taste test of the hottest hot sauces the company makes.

The willing flavor chasers start at one end, and sample each sauce, working their way to one of the hottest hot sauces in the world: Black Mamba Six.

The question was: How far could we make it?

When asked why he liked to make people cry, CaJohn answered with a laugh: “Because they pay me good money to do it!”

Here are some choice exclamations that were overheard as my motley crew worked its way up the ladder of heat:

“You’re calling us volunteer victims?! Those words should never be put together.”
“I also brought Pepto Bismol and kleenex.”
“Is there a hot sauce here that’s so hot it’s not intended to be eaten?”
‘This is named after a demon?”
“When we start sweating, that’s when we’ll start taking pictures.”
(mouth breathing)
“Swish it around in your cheeks like wine!”
“*coughs* That’s not how you drink wine!”
“Do animals eat hot peppers?”
“Birds do.”
“Of course they do.”
“I feel burn-y.”
“I feel like you don’t need to brush your teeth after this, because it’ll just melt your mouth clean.”
“Ok, I took a little milk and chip break, I’m goin’ back in.”
“Ohhhh my belly is doin’ something it shouldn’t be doing.”
“It feels hurt-y.”
“Am I supposed to be a little disoriented?”
“Isn’t that why you agreed to this?”
*sniff*
“This weird little part of my mouth hurts, right here.”
“That’s your frenulum. Oh my god, that’s the first time that knowledge has ever been useful in my life.”
“You ok?”
“Yeah. You?”
“I… I don’t know.”
*cough*
“You’re getting shiny.”
“I say it’s like drinking whiskey. The first shot goes down and makes you shake. The more you drink, the easier it goes down.”
“You’ve never seen me drink whiskey.”
“This can’t give me a stroke, right?”
“My sinuses are steaming.”
“My ears are ringing.”
“What are your *sniff* focus groups like?” *sniff*
“This is mace for your mouth.”
“This is Kobe Bryant in a bottle.”
“Oh my god.”
“Are you gonna throw up?”
“Not right now. Maybe in your car.”
“I was talkin’ shit. I shouldn’t have been talkin shit.”
“This is hate in a bottle.”
“I don’t wanna tap out but… But…”
“This one might make you cry.”
“I got the spicy pepper endorphins!”
“Your eyes are all glazed over…”
“Does anyone else feel drunk?”