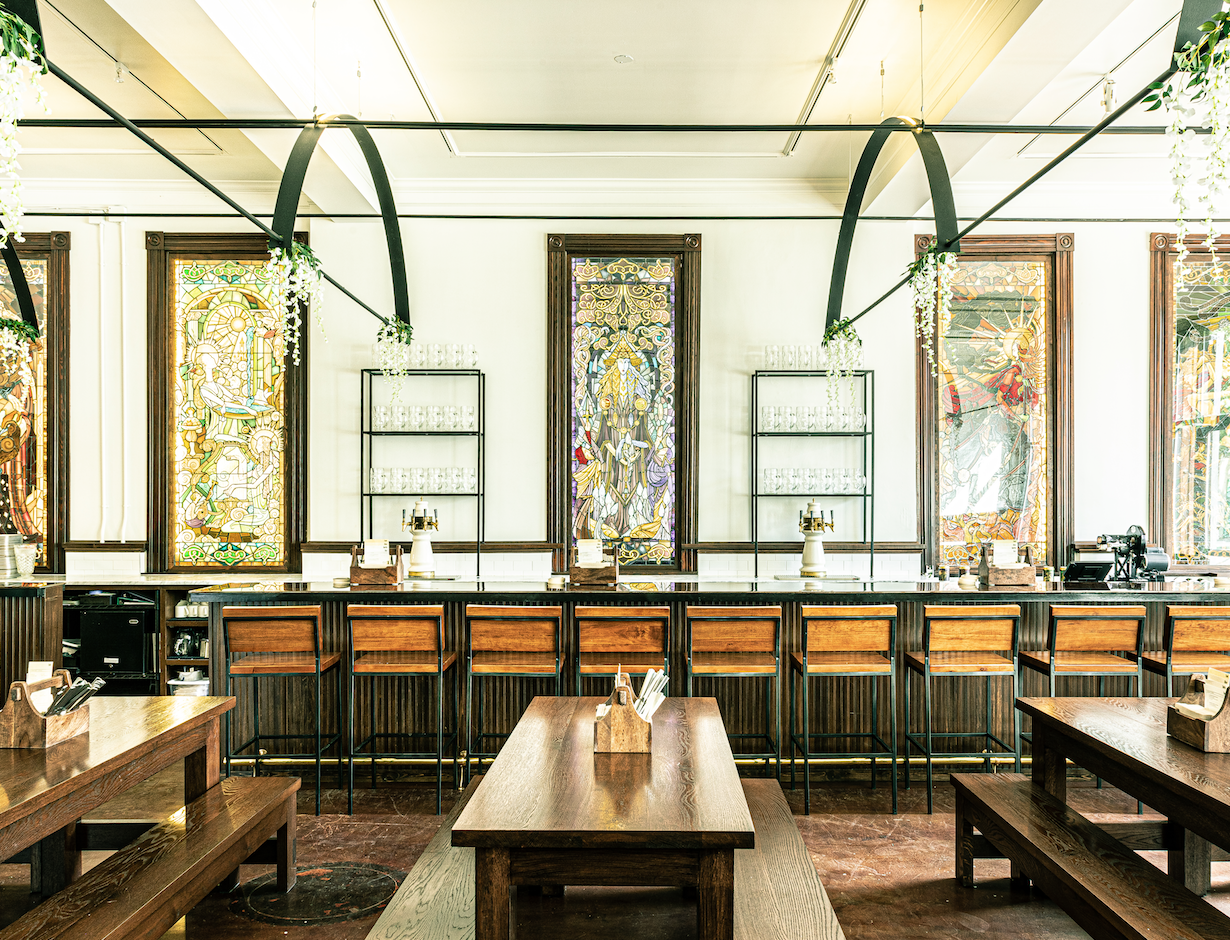 It takes more than glass mugs and an umlaut to make an authentic German biergarten. Columbus has no shortage of beer or brats, and our undeniable ethnic heritage puts the bar pretty high for anyone tempted to tap into the old country without seeming opportunistic or insincere. That’s why Gemüt Biergarten was so long in coming, and well worth the wait.

Inspired by their travels and smitten with the sense of community found among the biergarten scene in Germany, Chelsea Rennie and Kyle Hofmeister knew they wanted to build something together that balanced business and ambition with family and friends. Even their pending wedding didn’t diminish or defer their dream. They were in it together— for better or “wurst.” But they soon found themselves sharing that vision. Rob Camstra and Nick Guyton, already acquainted and formerly of Four String, pitched the couple on brewing their own beer on-site instead of simply offering imports and an authentic atmosphere. The idea made financial sense and the fit was fortuitous, as the four found their talents and experience so complementary. A new partnership was obvious and inevitable. Finding the right place proved more challenging.

“We always wanted to be in Olde Towne East; we all live here. But after a year of site selection, we just kept hitting walls,” recalled Rennie, Creative Director for Gemüt Biergarten. Her husband Hofmeister serves as CEO, with Camstra as Director of Brewing Operations and Guyton as Head Brewer. All are co-owners. “We knew wherever the brewery would be, it had to be on solid ground. Everywhere we looked was heavily critiqued. We had to know how much weight the floors could hold, or if we could add onto the building.”

The search slowly expanded, at one point including an old firehouse off South Parsons. But ultimately the building that was once the Columbus Music Hall, also a former firehouse, offered the old bones, ample parking, poured slab, and an enormous outdoor courtyard to complete the allocation of essential spaces. However, firehouses can be complicated retrofits, often as immutable as they are beautiful. Intricate stained glass and warm wooden features now soften the stark utility. The interior isn’t simply transformed; it transports you to another continent. Astute patrons can still spot where the old truck doors used to be, and aside from some subtle architectural cues, Gemüt looks and feels like it was transplanted intact straight from Germany in a giant crate labeled, “Biergarten: Just add Water, Hops, Malt, and Yeast.”

But biergartens aren’t built overnight, and long-awaited is also a polite euphemism for long-delayed. Unforeseen factors contributed to an opening that led into Oktoberfest more by accident than intent. The federal government shutdown earlier this year pushed Gemüt’s brewing operation back months, followed by a liquor permit fiasco that forced a last-minute cancellation of their soft open. Neither scenario is unique, or even uncommon, but the team’s collective experience in both the brewing and restaurant industry helped adjust expectations, avert disaster, and push forward.

“The building was empty for 10 years, so there were some changes in zoning that popped. We were actually ahead of schedule, and then it became a waiting game,” she revealed. “We submitted the paperwork for our brewer’s license in December, but because of backlog from the government shutdown, we didn’t get it approved until July. There were months when we had no idea when we would start brewing or finally open.”

Beer is essentially bread you can drink, but it takes more than an hour in the oven, and time is the only commodity you can’t buy at any price. However, delays sometimes offer a silver lining, getting to revise, refine, and set the stage for a well-oiled opening instead of a hurried or haphazard one. Executive Chef Adam Yoho’s menu continued to evolve just as Jeni Van Hemert’s expertise as Operations Director helped keep the entire project on track without letting the focus on customer experience suffer, despite bureaucratic interruptions that were unavoidably out of their hands.

“It seemed like we were constantly waiting. It was a curse, and a blessing,” Rennie conceded. “We had more time to organize, as uncertain as it was. We just made it work, and when we finally opened, we could enjoy it with family and friends without the stress we expected.”

The menu still isn’t static, but it certainly isn’t your typical bar food, with seasonal offerings complementing traditional standards and a credible beer selection. Rennie’s Macedonian family recipes make an appearance among a variety of chef exclusive wursts from The Butcher & Grocer, signature schnitzel, even a double-boned 20-ounce pork chop and a confit Cornish hen. Gluten-free and vegan options from Pierogi Mountain round out a menu with something for everyone. A wide wine choice, clever cocktails, and unexpected punches are served alongside their authentic German-style beers. The “Woden’s Hunt Dunkel” proved so popular, they actually blew through 30 barrels in just three weeks. Brunch specials on the weekends have already made it the breakfast brewery of choice among those seeking something hearty and heady.

“We may consider a larger commercial kitchen or additional brewing space elsewhere. There will only be one Gemüt, but we’re already considering future concepts,” she revealed. “Because we had such support from our investors, it allowed us to get everything we needed upfront. We never planned on a second phase, with construction interrupting operations after we opened. But this was always meant to be the stepping off point for the next project.”

Even among the owners, there’s an exceptional egalitarianism rare among restaurants and taprooms, the absence of which tends to undermine operations before the first plate or pint is served. The room for individual expression and unnamed passion projects already brewing is a fitting metaphor for the name that emerged late in the planning process, but on time and on brand.

“We knew we got it right when we opened and people instinctively started sharing tables, meeting neighbors they didn’t know. Gemüt is short for ‘gemütlichkeit’, which is the feeling you get in a biergarten. It’s about community and acceptance,” Rennie revealed. “In Germany, at a biergarten, everyone’s equal regardless of social status, income, occupation—you let all of that go. It’s about coming to drink and eat and celebrate together.”

Gemüt Biergarten is located at 734 Oak Street. For hours and operations, visit gemutbiergarten.com.