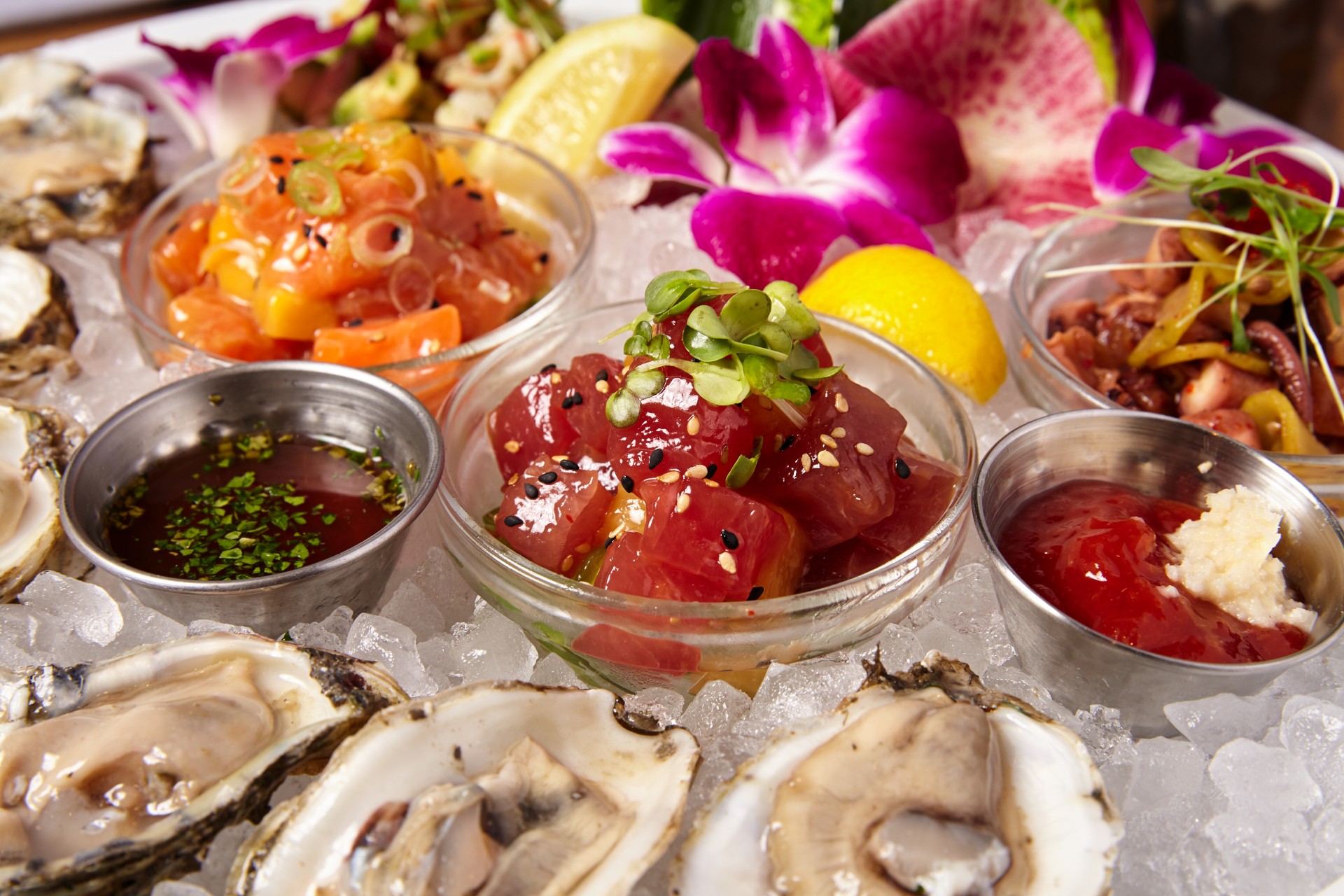 If not for the rhythmic roar of an occasional COTA bus breaking like waves against the shore, you might just mistake the sounds of the Short North for a Southern California boardwalk. But if the seaside-inspired shutters and coastal decor of its most recent restaurant don’t suspend your disbelief, the menu and milieu surely will.

Cameron Mitchell’s newest venture, Del Mar SoCal Kitchen, is the casual counterpoint to Ocean Prime (or what we locals know better as the original Ocean Club). Though the dinner-only destination is more than a “finer diner,” with an emphasis on intimacy, dominated by two-tops complemented with low-lit alcoves for more amorous couples and conversations.

The weekend before any restaurant launch is often a soft open, the culinary equivalent of a dress rehearsal for a forgiving audience. But unlike the average opening night, this evening was actually a tale of two Camerons. To my left was the insatiable restaurateur introducing a table of friends to his latest collection of curated cuisine, and at my own table, the irrepressible Cameron Fontana and his wife Katie. Familiar faces for sure, but we were otherwise strangers who just happened to be seated together.

Columbus is just big enough for folks to share the same orbit without ever intersecting. Though they didn’t know it at the time, my wife and I also happened to be house shopping a couple of years back, even looking at some of the same homes, including one featured
on their appearance on HGTV’s House Hunters. Fontana also fell short of finishing a comically-proportioned local pizza challenge, as well as having been born in Osaka the same year I’d spent a summer in Japan as an exchange student.

Cameron moved to California as a kid, decades before television became his calling and Columbus his adopted hometown. Meanwhile, Katie hails from Pickerington, yet her influence as a fitness and dance instructor reaches well beyond Central Ohio. The unanticipated rapport made them the perfect two-person test market for that other Cameron’s Midwest twist on coastal comfort food.

Never mind the awkwardness of new acquaintances. Exploring the menu immediately became a group effort, with each course pushing geographic and culinary boundaries. Though billed as a “SoCal” establishment, opening options like the curry clams, with heirloom tomato and Thai coconut, to the chilled octopus, served on ice with pickled cucumber, tobiko roe, and a citrus vinaigrette, cast a wider net with Pacific Rim credibility.

Cameron was cool with shells, scales, even suction cups. But Katie confessed she isn’t always so keen on seafood. It’s a common conundrum among couples when one comes from the coast and the other is a little more local, another coincidence my wife and I share with the Fontanas. It’s not that seafood is inherently more sophisticated, just more scarce. The farther you grow up from saltwater, the more likely you are to eat off the hoof than off the hook.

Accordingly, Katie ordered the more reliable angus ribeye, flanked by a spinach salad of smoked bacon, pickled turnips, and ricotta salata, while Cameron was tempted by the almost obligatory fish tacos, breaded in a Baja style Tecate beer batter with bright pico de gallo and a sweet potato chimichurri. The halibut had my name on it, with Marona almonds and golden raisins atop a citrus chili relish. But everyone was also eyeing the swordfish, which we agreed to split—along with everything else.

And this is where Del Mar really raises the bar, offering equally enviable alternatives to their signature fare. At most seafood restaurants, if it doesn’t have fins, it probably plays second fiddle. The ribeye was seasoned and seared to steakhouse standards. The tacos were on target with a tempura texture offering yet another nod to California’s Asian influences. The halibut was delicate and decadent, and exactly what you’d expect from a plate I later learned every chef has to personally approve before it leaves the kitchen.

But the swordfish was sumptuous and as satisfying as any cut of steak, balanced with a refreshing Brussels sprout and sliced apple slaw with orange-mustard vinaigrette and a creamy sweet potato puree waiting to be discovered on the bottom of every bite. If there’s a single entree that epitomizes Del Mar’s earnest appeal to Midwestern palates, this may be it—and Katie is among its early converts.

Del Mar’s desserts are deceptively understated. Easily overlooked are the coconut sorbet served on the half shell and the Hawaiian shaved ice with the punch of pineapple. Order both and share for an experience akin to a deconstructed piña colada. For something more citrusy and unexpected, the olive oil cake is like eating an orange creamsicle with a fork, and so moist it cuts without leaving a crumb.

Dinner could end right there or extend upstairs to Lincoln Social Rooftop, an equally intimate perch accessible only by private elevator. Despite the polished appointments and urban overlook that stretches from downtown to the University District, the low seating around a cozy campfire still carries a little of the beach vibe into the exclusive cocktail lounge.

Despite its shine, California cuisine often gets as much shade, with petite and pretentious presentation rubbing the working class the wrong way. Steve Martin’s sardonic Shakespearean satire L.A. Story summed it up succinctly with one silly line — “Gee, I’m done already and I don’t remember eating.”

Not so with Del Mar SoCal Kitchen. Each plate is portioned with purpose—generous, but never garish—featuring flavors that reveal a refined appreciation for beloved regional ingredients. Those Brussels sprouts and sweet potato headline a recurring cast of Midwest favorites rarely found in deep-sea delicacies. The recipes are ocean-inspired, but undeniably Ohio in origin. If Alice Waters were to suddenly set up shop in the Short North, her execution would likely look shockingly similar.

Columbus is still a meat and potatoes town better known for beer and beards than seafood for certain. But the thoughtful and affordable opulence of Del Mar SoCal Kitchen proves we’re more than just another inland culinary imitator. We’re not simply an emerging market. We’re evolving into a city that defines its own identity—sure to acknowledge influences, but unapologetic as innovators deserving our own overdue moment in the sun.

Del Mar is located at 705 N High St and is open Sunday through Thursday 4pm – 10pm and Friday through Saturday 4pm – midnight. Visit cameronmitchell.com or call 614.300.9500 for more information.