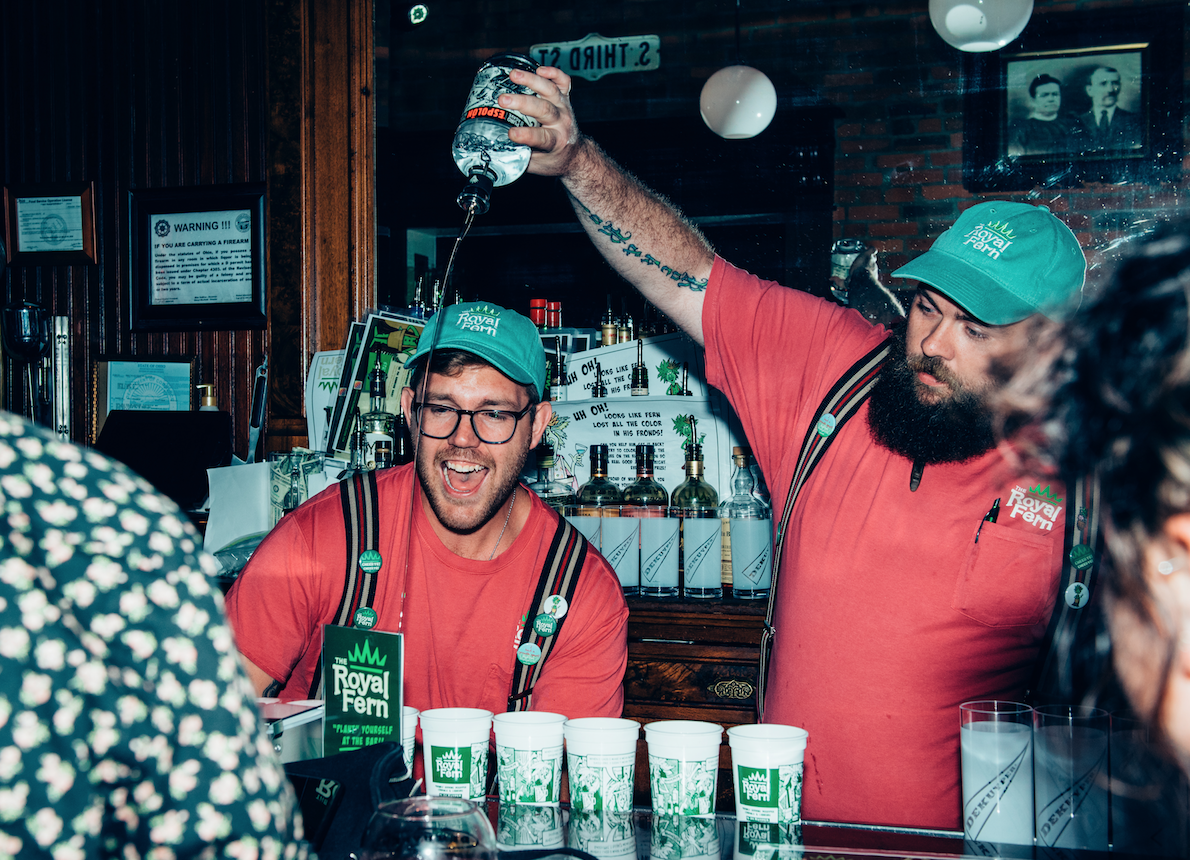 The city’s first franchised pop-up event, The Royal Fern, was created for those seeking a twist of their favorite OG cocktails.

For co-owner Josh Gandee, there was also a certain indie-rock muse in mind: Alanis Morrissette. In fact, Gandee is so into to her music that he slyly uses Morrisette’s lyrics in response to The Royal Fern’s name being a nod to the Osmunda regalis plant (“A little too ironic…don’t you think?”). For Gandee, Morrissette’s signature 90s hit isn’t just a go-to karaoke sing-along, but an anthem for The Royal Fern’s nostalgic purpose.

“Looking around at a room of your peers while everyone belts out the lyrics to ‘Ironic’ allows you to harken back to a different time, and to really let you let loose with friends,” Gandee says, mentioning that coloring sheets are also available for guests who just want to take in the atmosphere. “We wanted the current cocktail enthusiasts to bend backward a little bit and experience moments they shared when they were younger through a different lens. It is different from the classic nostalgia, or decade party, it’s as if we are participating in revisionist history.”

“We used the talents of some of Columbus’ top bartenders to bring a style of the drink back to life, and give it the attention [it] deserved,” Gandee says. “We don’t stray too far from the originals. We just soften the flavor profiles, and adjust them to the current cocktail drinker.”

From a league of some of the best bartenders in Columbus, including Barbara Reynolds (The Bottle Shop), Rebecca Monday (VASO) and Greg Burnett (Wunderbar and Sidebar), signature drinks were adjusted to give them more lasting power. Instead of reaching for the sour mix, the staff utilizes fresh juices and trusted ingredients in a flavorful partnership with sponsor DeKuyper.

But it isn’t just cocktails that are a favored specialty at The Royal Fern. Old-school bites include spinach and artichoke dip, loaded potato skins, and the Fern Burger, meeting at the corner of “Hey, remember when?” and “Those were the days.” You might even want to stick around for the nachos. “We recommend getting comfortable, perusing the menu with friends, and just trusting the menu,” Gandee says. “We work with real bartenders and real chefs to put together an appetizing menu that both brings attention to the chain restaurant golden years, and to the current ‘foodie-slash-cocktail’ enthusiast culture.”

Giving conventional bars a new life, The Royal Fern makes intentional use of freshly-made simple syrups and prime-quality spirits. With the already-bright and recognizable flavors from DeKuyper, their Blue Curaçao and Root Beer Schnapps liqueur are staple ingredients ready for instant mixing. By replacing cocktails drowning in syrup for light seltzer and bitters, The Royal Fern’s sweet, highball approach is fitting for any cocktail aficionado.

“We were figuring out what to do as an activation to get people [to be] creative with their liqueurs, and the more we thought about it, we discovered that the Fern bar era of drinking is sometimes looked at like it never happened,” Gandee says. “Instead of painting DeKuyper to be something that people had never seen before, we wanted to reintroduce it with the same idea of the drinks of the past, but reinvigorated with flavors and techniques of now.”

Continuing to merge with local bars to bring the “royal” treatment to various establishments, The Royal Fern doesn’t yet foresee developing its own brick-and-mortar, but rather bringing enough people together to experience the taste of the neighborhood.

“Columbus is ready for anything. If someone has an idea, there is someone else there ready to support that idea. We’re close enough to some of the larger markets where trends are capitalizing that we get to ride the wave of fun and creativity without it having to first wash over us,” Gandee says. “There are more and more creative people getting an outlet to express their ideas and voice, and Columbus is a town that will fully embrace the arts wherever they fall.”