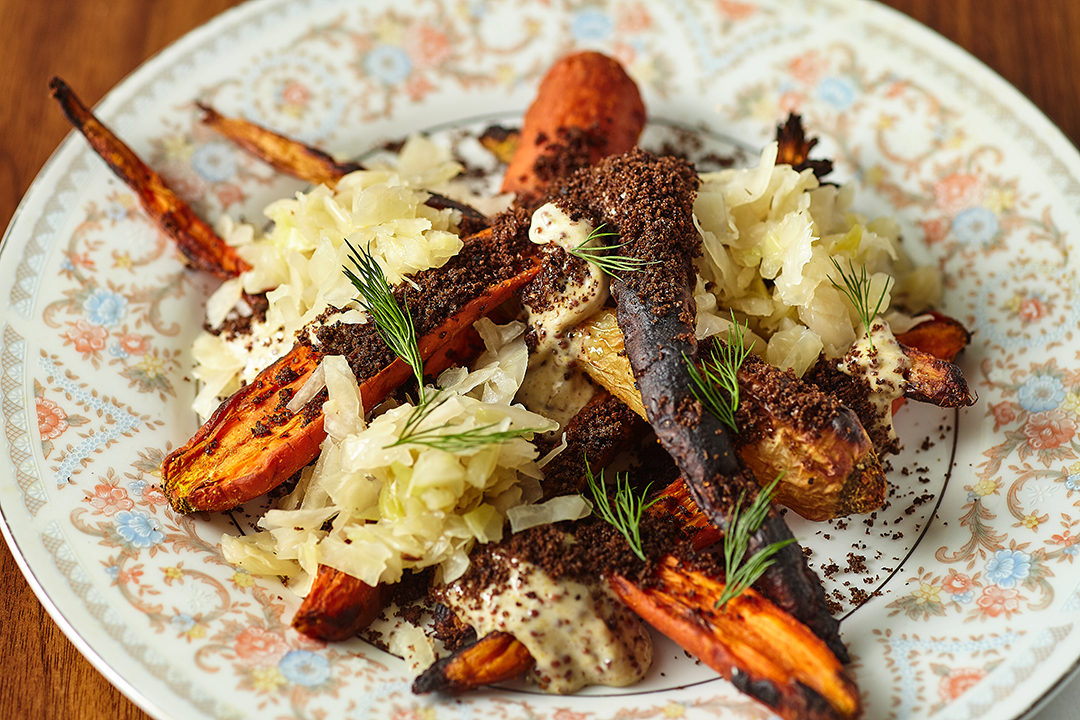 Arena football returns to Columbus, what should team name be?

Several months back, when I first interviewed the dynamic duo of Catie Randazzo and Matthew Heaggans upon opening their now omnipresent Preston’s burger joint, they had been prepping and planning Ambrose and Eve for a significant time. But they had very little to reveal other than saying that the restaurant would be an upscale dining experience—as opposed to the luxury junk food of Challah, the food truck, and Preston’s—and that it would be like “the best dinner party ever thrown, but every night of the week.”

Sure, that’s a bold statement, but think about who’s doing the talking. If you’ve come to recognize Challah and Preston’s as institutions in the Columbus food scene, then you should trust in the words and culinary aspirations of Randazzo and Heaggans. And with Ambrose and Eve being the all-encompassing gem in their growing empire, you should trust that despite major setbacks, this is the duo at the height of their conceptual powers.

The cozy South High Street spot has only been open a little over two months, but it’s already become a regular haunt for foodies in the know, and a buzzy destination picked by national publications eager to find the next great food city. Repeat business proves they’re doing something right, especially with a menu that aims to challenge as much as it does comfort its guests.

“I’ve always felt frequent, but well-executed change is the way to see people often,” says Heaggans. “We try to keep the food fresh and interesting so people don’t get bored. I’m super grateful to a lot of our diners who come here over and over again. Our reservation system tracks who’s dining with us and a really large chunk of our reservations day to day are people who have dined with us before, and we’ve only been around for a short spell.”

Indeed, comfort is key in creating a culture. And seeing that there was a particular need in Columbus dining for what Heaggans calls a “homey sort of restaurant,” the simple-yet-refined design of the space—like stepping into a farmhouse dining room or a grandparent’s generational home—and familiar-yet-elevated scope of the menu, creates an experience that few places in the city could replicate.

The menu has a number of traditional staples inspired by comfy diners and home-cooked meals. Chicken and dumplings, fried chicken, pot roast, shrimp scampi, and spaghetti-o’s, mingle with pastrami carrots, veal sweetbreads, and the show-stopping red oil tatare: all delicacies for all palettes. Yet each plate is presented with a particularly leveled-up crux of flavors.

The aforementioned lunchtime snack that came from a Chef Boyardee can, is prepared instead with a housemade anelli pasta and sauce with meatballs culled from a mythical secret recipe. While the red oil tartare, though perhaps a challenge for some, is raw beef tendon expertly mixed with garlic chips, sesame, sunflower, rice, vinegar, and served with the spot’s signature scallion rolls. With snacks, shares, unparalleled veggie dishes, and over-the-top family dinners, the duo’s collaboration to distill their influences into a comfortable but challenging menu, guarantees those return visits continue, as it’s ever-changing, and as everything is worth a try.

“When one of us has an idea for a dish, we talk about it,” says Randazzo about the creation of a new dish. “We talk about the integrity of it, how
to manipulate it, update it, the texture, the plating, the acidity, all facets
of what we want the dish to be. Then we make the dish. We eat it. We discuss if it needs more salt, acid, fat, or heat. We remake the dish. We discuss it again.”

But as comfortable as Ambrose and Eve can seem on a relaxing night out, or as compatible as the menu can be given its range and warmth, semantics rule. Randazzo and Heaggans will always prefer “lost sleep” and outright “exhaustion” to keep the restaurant outside too much of a comfort zone. As much as they provide the simplicity of a great meal, they are always keeping Columbus diners on their toes.

“Columbus still has room to grow,” says Randazzo. “I often find people saying, ‘Well it’s good for Columbus.’ I don’t want to hear that; I think it’s a cop out. We as chefs need to push ourselves, and push the boundaries that has made the food scene in Columbus comfortable. If we really want to get on the food map then we need to take chances. I love Columbus and I always will. It is my home, and I want to do as much as I can for this city. Whether with food, volunteering, or lending a hand to whomever I can. But there is still work to be done, and I am ready to put the time in.”

Ambrose and Eve is at 716 S High St. Visit ambroseandevecolumbus.com for a menu and reservations.