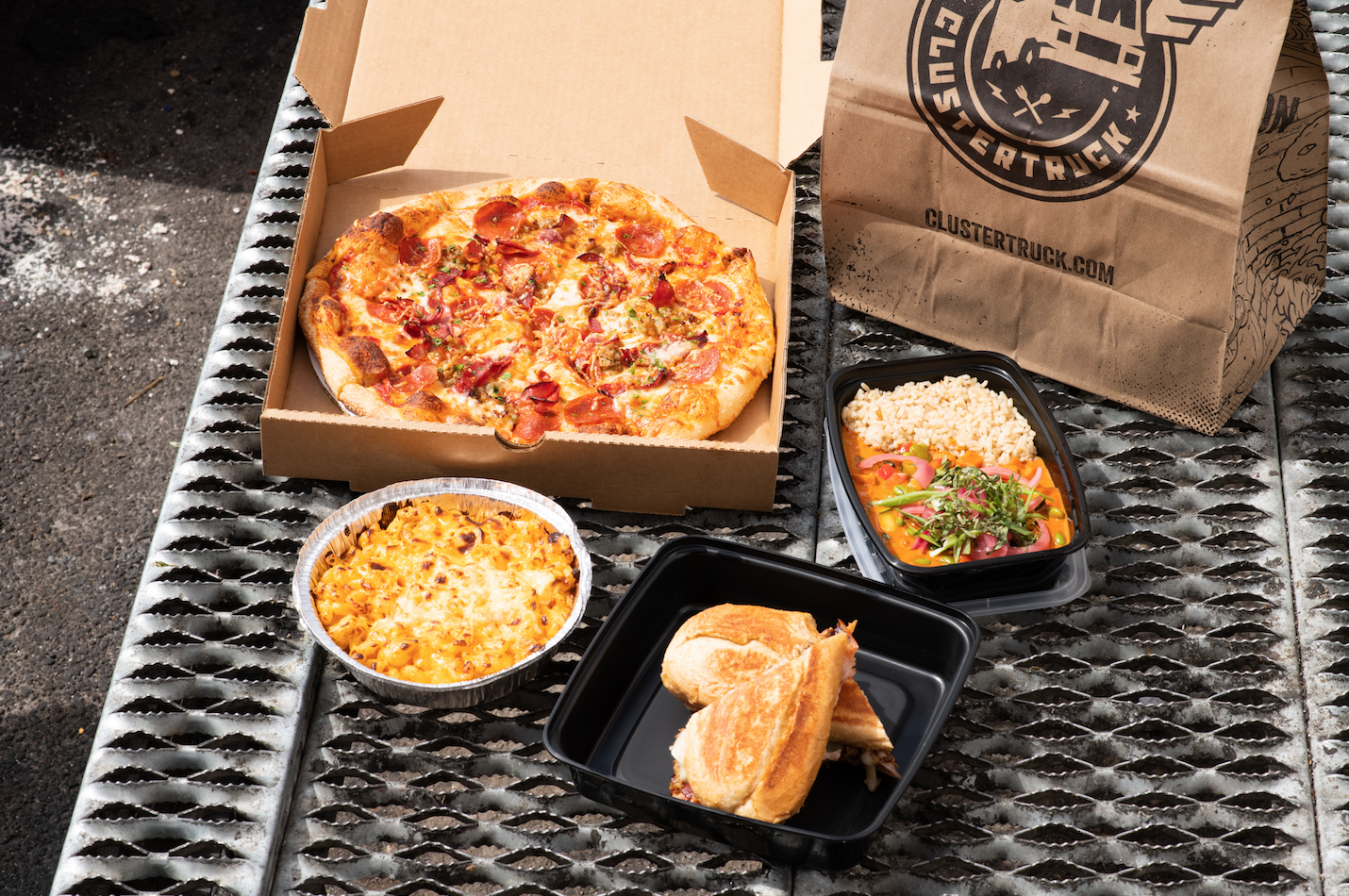 When Chris Baggott returns from a run to the ClusterTruck kitchen, he’s almost always late, and his fellow drivers don’t mind letting him know it. Tight delivery times aren’t just an expectation for the fledgling food service. It’s part of the brand, serving fresh fare to waiting patrons, often in less time than the average restaurant.

So what’s ClusterTruck’s trick to providing such a wide range of high-quality cuisine at a record pace? There’s no restaurant, and their slowest delivery driver, Chris Baggott, is also the CEO.

“I don’t go out as much as I used to, just to keep my hands in it. But when I get back minutes later than our more experienced drivers, they laugh at me,” Baggott confessed. “If you’ve been doing this for a year, you’re good at it. You know which corner or which door, a little shortcut here and there. Faster delivery is what makes our business work.”

Quietly creeping into the local culinary scene between the flood of innovative eateries and a fleet of food trucks are so-called “ghost kitchens.” They’re restaurants without the restaurant, focusing exclusively on delivery without the hassle and overhead of running a retail establishment. Homegrown concepts like Food Fort Columbus and 1400 Food Lab help industry entrepreneurs prepare meals with all of the precision of their retail rivals. Kitchen United, which already operates locations in Pasadena and Chicago, is scheduled to open their latest facility in Grandview Yard this year as the next phase of an ambitious nationwide expansion. For those struggling to find and afford suitable space, it’s the culinary equivalent of co- working and part of an already $100 million food delivery industry.

But ClusterTruck remains the original, unapologetic disruptor. Operating out of an inconspicuous warehouse near downtown Columbus, it relies on its own dedicated delivery team instead of contract food couriers to serve their hungry customers.

“There’s a broken model in third-party food delivery, from delays that affect quality to low courier morale. If you look at Yelp, a lot of the negative reviews are really criticisms of the delivery process,” he explained. “When I first looked at this market, the restaurants weren’t happy, the customers weren’t happy, and the drivers weren’t happy. So we deconstructed it and built a system that serves all of its constituents.”

That approach may sound a little wonky for a phantom food truck operator. But Baggott didn’t work his way into the restaurant business busing tables. His former life as a software creator proved both profitable and liberating, with earlier endeavors snapped up by Salesforce and Oracle for handsome sums. Along the way, he got back to basics, exploring his growing passion for sustainable agriculture, going as far as starting his own grocery store, then founding three farm-to-table restaurants from scratch. Baggott is as much a chameleon as an iconoclast, as comfortable in a conference room as a chicken coop. Even with dirt under his fingernails, the gears of an engineer are always turning.

“Let’s say the customer is five minutes away from the kitchen, and I have 30 minutes to get the order there. Our software manages our drivers, so we may not start making your food immediately,” Baggott noted. “Our driver may be able to make another delivery before your order is ready. We’ll start making your order when the driver is five minutes away. That way, you get your order on time, and fresh from the kitchen.”

Comfort food is evolving by definition. From hearty carbs to sophisticated salads, “comfort” is now more a measure of how food makes you feel, not an arbitrary attribute that’s the same for everyone. Meeting that ever-expanding expectation is also an edge for such hyper- efficient eateries.

“Ghost kitchens can iterate and innovate. We recently launched a gyro in Indianapolis. We also launched a protein bowl with hummus we make in house,” Baggott recalled. “That’s when we realized we already have pita, tahini, and chickpeas—we should make a falafel. Now, we’re testing recipes to launch a falafel.”

Not all revelations are as obvious or unemotional. The Columbus customer base continues to grow, as are operations in Denver, Kansas City, and the original location in Indianapolis. But ClusterTruck locations in Cleveland and Minneapolis were temporarily suspended. Some menu items have also gone away when they didn’t make the cut, including their take on Johnny Marzetti.

“Dropping Johnny Marzetti was heartbreaking for me because we already had all of the ingredients. I loved it, but it just didn’t sell. But a big advantage we have over a brick-and-mortar restaurant is access to data. A traditional restaurant may launch a new menu item and sell 500 the first day,” he explained. “But they can’t see who orders it again, or worse, who ordered it and never came back. All of those transactions are anonymous. We see everything, order rates and reorder rates. We don’t just know what sells, we know how it impacts overall customer experience.”

ClusterTruck launched a tofu kimchi burrito that initially sold very well, but then seemed to taper off. They dropped it, but once they dug into the data, they discovered existing customers returned, but customers whose first order was the ill-fated burrito didn’t. Their online menu has since become more adaptive, featuring items with higher rates of reorder for new customers, something typical restaurants just can’t do, and an insight they probably would have missed.

“One of the challenges with Cleveland and Minneapolis was building the brand. We were great at building kitchens and software, but frankly, we weren’t great at marketing because what we do is so different,” he noted. “We haven’t abandoned those cities, we’re just refining our marketing before we reopen. It’s one of the advantages third-party food delivery services like Grubhub and DoorDash have. They’re just adding a new service to an existing restaurant. We have to introduce a whole new brand.”

The funny thing about brands is that they aren’t how you view your company, it’s how others view you. And that’s also an inherent challenge for restaurants minus retail, even as the market for prepared foods booms. Catering is key for most ghost kitchens, and ClusterTruck tapped into it early, making group orders easier for folks with restrictive and selective diets, even offering access through the popular office collaboration platform Slack. Now about a third of sales come from group orders. But every new business needs a little luck and a leap of faith. Fast, free delivery still came down to customers meeting couriers at the curb, a hunch that paid off.

“That’s our entire business model, and the one thing we couldn’t know for certain before we launched if customers would be willing to do. It’s why our drivers get four to six, even eight deliveries an hour, instead of just one or two,” Baggott explained. “We’ve had more than a million deliveries and I can count on one hand the number of complaints we’ve had about having to meet the driver. When it comes to quality, every efficiency matters. It’s why customers are as much a part of our success as our staff and our software. They come to us, online and outside, and that’s what makes ClusterTruck work.”

For menus and ordering, visit clustertruck.com.