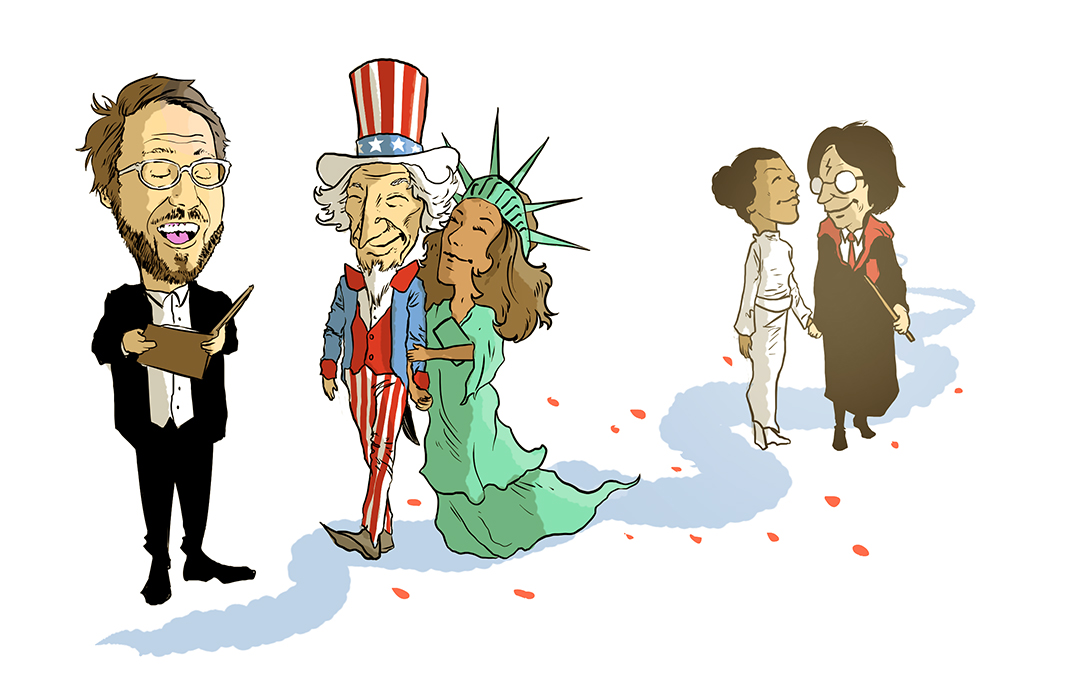 When planning for a wedding, you are probably making sure all your bases are covered. Will the menu have options for everyone’s dietary concerns? Do we have enough seats for everyone? Open bar or cash bar? What pictures are on our “must-have” list?

These are just the questions a good wedding planner asks couples during the process of getting everything absolutely perfect for your big day. But, if you decide to plan your wedding with Scott Hammond, the list of questions will look a little different. Instead of an event hall or church, you’ll be strolling through the Short North. And rather than your family, friends, and closest colleagues gathering around in chairs or pews, they’ll be standing on the side of the street as a part of the heckling crowds at the Doo Dah Parade.

In fact, the one question you’ll be asking yourself the most is: Is this even possible? And if you ask Hammond, he seems to believe the answer is yes.

The idea is simple: get four engaged couples to plan a wedding during the Doo Dah Parade. Since the Doo Dah Parade has no strict rules on themes (as long as you are not overtly advertising for a business) or an upfront amount to pay to be a part of the parade, Hammond said the permission side is handled. Thanks to a friend who got married last year, he’s already gone through the legal steps of becoming able to officiate weddings. The only thing he’s missing is the couples. Hammond explained that since the parade is an hour long, he could perform four 15-minute weddings during the parade.

So why the Doo Dah Parade? It’s a complicated answer, and it all starts with an infamous sign in Clintonville. In early 2018, WOSU was looking into the origins of a “Kangaroo Crossing” sign that had been posted on Clinton Heights Avenue as a joke for several years. Though it wasn’t the intent, the investigation prompted the city to remove the sign for safety and permitting reasons, causing a community outcry to get the sign returned to its rightful spot near Clinton Elementary School.

Eventually the sign was ceremoniously replaced, and a large part of that effort was thanks to the work of Hammond. He and a team of community members came together to bring back the weird, yet iconic sign, even creating a Doo Dah Parade entry around the experience. However, the Doo Dah planted a seed in Hammond’s mind: How could he be a part of the Doo Dah Parade the next year? And furthermore, how could he make a unique statement in a parade that is quite literally the embodiment of unique?

“What if I’m in the Doo Dah Parade? As in, I’m walking as I’m marrying someone. And even further, what if it’s several weddings?” Hammond questioned. “We’ll have all the trappings of a wedding, but a mobile wedding. We’ll be walking the entire time.”

The Doo Dah Parade serves as a time to laugh and poke fun at serious and polarizing topics in the political news as well. While the weddings don’t hold any political statement, Hammond thinks these ceremonies can provide positivity in a political climate that seems to lack it.

“I’ve been affected, just like many others have, by this political climate with all this negativity and I thought this would be a way to sort of send out positive energy which I think is one of the points of the Doo Dah Parade.”

To get in contact with Scott Hammond about planning your wedding during the 2019 Doo Dah Parade, [email protected]