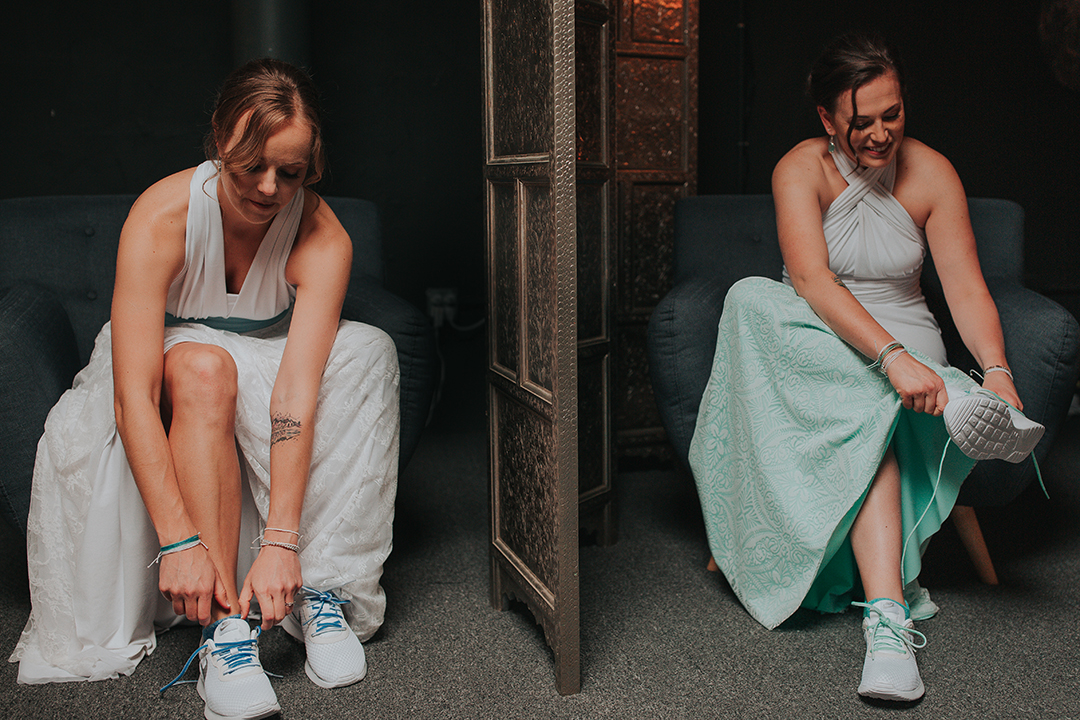 Avid travelers and marathon runners, Heather and Lindsay themed their wedding “Adventure of a Lifetime”—also a shout out to Coldplay, their favorite band, and were totally up to the challenge of planning their special event. Playing up the travel/unique factor, Heather and Lindsay had all of their wedding “flowers” handmade from maps by TreeTownPaper (find on Etsy) and labeled their reception tables after different cities they’ve visited (Sydney, Rome, Toronto, Rio de Janeiro, and Cape Town). Their “guest book” was a stack of postcards where guests could indicate a favorite travel spot or bucket list destination.

The affair had both its fun and moving moments. Lindsay arranged for a show-stealing performance of two of the couple’s favorite songs, while Lindsay’s dad spoke about gaining another daughter and how some “barriers had been broken,” for a conservative family. Heather’s dad, a lawyer, spoke about the Obergefell v. Hodges SCOTUS case that made the day possible.

Capitalizing on local vendors old and new, the couple offered their guests dessert choices of J-POPS gourmet ice pops, Buckeye Donuts, as well as custom-sized Whit’s Frozen Custard cookie sandwiches. Not forgetting guests’ canine companions, the couple had Platform Beer save up some spent grains, which they turned into puppy treats.

The Big Day in six words:

Love is Love/Favorite day ever

Who was someone who made your big day run smoothly?

We have two people to thank for making our day run so smoothly. Our officiant Cory was so organized and knowledgeable! Our ceremony was simply incredible—so heartfelt, raw and emotional. Our ceremony consisted of two readings (unique love poems by Lindsay’s nephew and Heather’s grandfather), two vocal performances (by Lindsay’s brother and Heather’s cousin; we gave each of them song options, but their pick wasn’t revealed to us until they sang it!), and vows that we wrote ourselves but didn’t share with each other in advance.

Our second person to thank is our DJ Ben Wallace (Beat Squad Entertainment). Ben was phenomenal. He was the perfect emcee for our reception entrance: a “starting lineup” roll call (a nod to our college basketball playing days) that combined a custom mix of Beyonce’s “Run the World” and “Formation.” The only time that guests left the dance floor was to grab another Buckeye Donut or Platform Beer, or to witness the closing seconds of LeBron’s final win with the Cavs (which we had projected at the bar).

Any standout stories from that day, or something that you’d do over every time if given the chance?

Our friends own Platform Beer Co. and we’ve been proud to support them from the time the business was conceived. Exactly one year prior to our wedding (Heather’s 34th birthday), Linds did a surprise proposal at Platform in front of family and friends by creating a fake beer description (i.e. surprise proposal!) that Heather had to read aloud. Our wedding was exactly one year later, and we knew we had to make Platform a part of the day. We held our rehearsal dinner at Platform, and kicked off the festivities by doing a “unity pour” at the bar to sample our brew: a cherry ginger saison that we named “Perfect Storm.”

Did anything go comically wrong, or was there anything you wish you had skipped?

We had three “Ring Boyz,” Heather’s two twin nephews Madden and Mason (age 9) and Lindsay’s nephew Theo (age 5). Mid-ceremony, our officiant called for security by yelling “Ring Boyz!” Our DJ then blasted Drake’s song “Big Rings.” Lindsay’s brother missed the cue to get Theo to the back of the room for the big entrance. So Madden and Mason strutted/flossed down the aisle as planned, but Theo was late getting there. He ended up going up the aisle the wrong way, dropped his boom box prop, and then awkwardly (but adorably!) made his way back down the aisle. Our photographer captured a cute pic of Theo after he dropped the boom box. Even though this moment wasn’t planned, we describe it the way we describe many moments of our relationship…perfectly imperfect.

Was there anything you did or had that made the big day easier?

Both of us are extremely organized, so the first thing we did to start planning was make an insane excel tracking spreadsheet. We organized our budget, vendors, “to do” list and more. We created three really solid timelines: overall wedding weekend, ceremony and reception. All vendors and bride squad members were given the timeline(s) in advance. Everyone knew what was supposed to happen, and when. This honestly made everything run incredibly smoothly. There were no hiccups or glitches. It was really fun to see the whole day pan out exactly as we had intended!