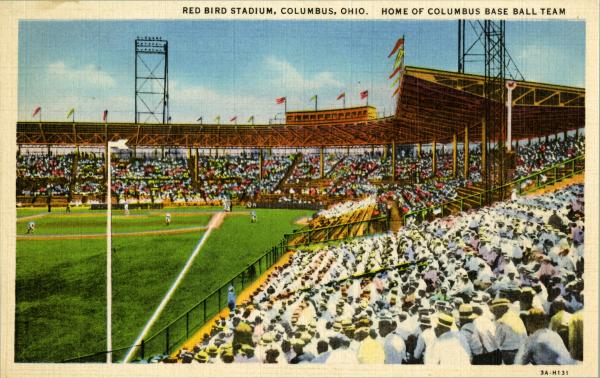 2 Columbus chefs in the running for top culinary award

Believe it or not, this year will mark the twelfth season of Clippers baseball in Huntington Park. As Columbus celebrates a decade in its new home for baseball, let’s take a look back at the Stadium that gave the Clippers (among other C-Bus teams) their start.

Opening in in 1931 as the home of the minor-league affiliate of the St. Louis Cardinals, Red Bird Stadium (as it was then called) was constructed using the same blueprints as Red Wing Stadium in Rochester, New York. In Red Bird Stadium’s inaugural game, the 1932 season opener, more than 15,000 fans watched on as Columbus obliterated the Louisville Colonels, winning 11-2.

Known for its formidably-long outfield, legend has it that Joe DiMaggio and Ralph Kiner were the only players who managed to hit the ball out of the stadium’s 457-foot left field.

Another team would make the stadium its home in 1955, when the Ottowa A’s relocated to Columbus. The new Columbus team was dubbed The Jets, with the stadium renamed Jets Stadium. And so it remained until 1970, when Columbus officials refused to renovate the stadium at the expense of taxpayers. The owners of the Jets moved the team to Charleston, West Virginia, and Jets Stadium lay dormant for six years.

1977 saw the dawn of Columbus baseball as we know it today, when the International League granted a new franchise to the city and the Columbus Clippers were formed. Named for Harold Cooper, a baseball promoter who worked to preserve the old stadium and bring minor league ball back to Columbus, the home of The Clippers was officially dubbed Cooper Stadium in 1984. The Coop would remain The Clippers’ home until the relocation to Huntington Park in 2009.

Aside from baseball, Cooper Stadium played host to many memorable events throughout the years. President Franklin D. Roosevelt kicked off his first campaign in the stadium in 1932. The Columbus Bullies, a professional football team from the American Football league, played games there from 1939 to 1942. The Coop even hosted concerts from acts like Aerosmith, Bob Dylan, and Garth Brooks over the years.

Today, few signs remain of Cooper Stadium’s former glory. The grounds are overgrown with weeds and much of the structure has fallen to disrepair. The site has become a destination for graffiti taggers and abandonment tourists alike. Proposed plans from a developer to convert the grounds into a racetrack have apparently stalled, leaving the future of the old stadium uncertain.

While thinking back on the history of the Coop is bittersweet given it’s current decaying state, there are still plenty of bright spots from Ohio’s sports history to enjoy. Visit The Ohio History Connection this weekend to explore their new exhibit titled Ohio-Champion of Sports.

What are some of your favorite memories from The Coop? Let us know in the comments.

Special thanks to ohioexplorationscoiety.com for information about the history of Cooper Stadium.