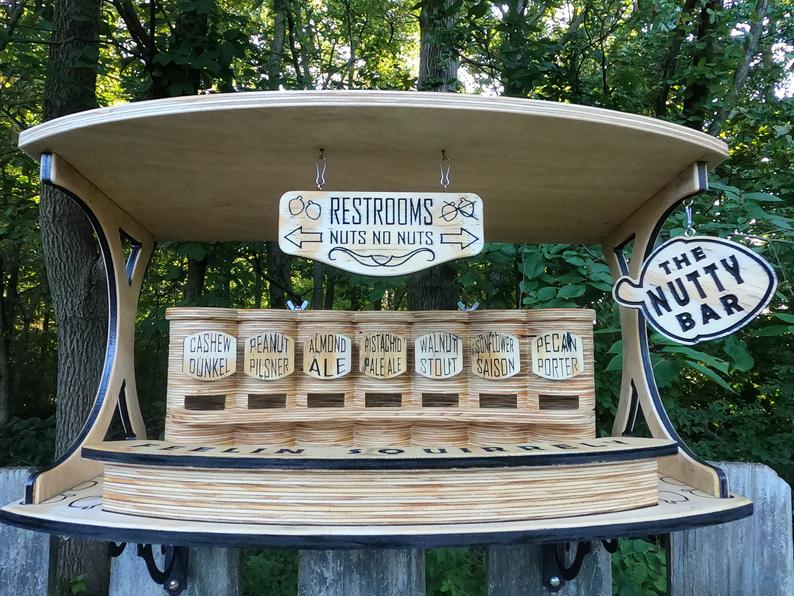 “I am now known around the world as the Nutty Bar man,” said Michael “Nutty Bar” Dutko of Hilliard.

He laughed and added he never expected that. Then again, who would?

Dutko, 35, earned his nickname when he decided to create something to aid in his neighbor’s bird-watching. Area squirrels had been stealing birdseed and harassing the local robins and wrens.

That gave Dutko an idea. If the former shop class standout could distract the squirrels, he could entertain his three daughters and help out his neighbor.

It’s a replica of a small nightclub, complete with nuts labeled Cashew Dunkel, Peanut Pilsner, Almond Ale, Walnut Stout, Sunflower Saison, Pecan Porter and Pistachio Pale Ale on tap—not to mention a sign directing visitors to the restrooms for those with nuts and no nuts.

He set it out Aug. 7, and so far, the furry creatures have enjoyed it.

“They are,” Dutko said, “but I have to make sure that I don’t keep it filled because then they’ll become dependent. I only fill it about every 3-4 days, but it has helped immensely.”

As for the goal of entertaining his one-year-old twins and soon-to-be three-year-old daughter?

Dutko admitted to being entertained himself. “It’s such an enjoyment to watch those little guys eat. I don’t know what it is about it; it’s just funny.”

It’s been such a success that an hour before 614now.com spoke to Dutko, he had started to sell versions of the Nutty Bar online for $175 dollars, and he said it had received interest from potential customers from Korea, Japan, Belgium, the United Kingdom, and Africa.

Interest has also been generated by the viral YouTube video he filmed to show how the Nutty Bar was created.

“It’s really something, I tell you. I was not ever expecting all this attention, but you put something out there, I guess you’re bound to hear the world speak back to you at some point,” said Dutko.

The charisma he demonstrated in the video garnered some notice, and Dutko—currently working as an estimator and cost manager for a large home builder in town—says he has been approached about possibly hosting a television show.

He had no idea that a talent he first honed in shop class at Thomas Worthington High School would earn such acclaim, but now he has started a woodworking company named for his grandfather, Duke Harmon, the late Columbus fire chief.

“He saved a lot of lives,” Dutko said of the tribute. “So I decided to name the shop after him.”

Soon that shop could be making some additions, much to Dutko’s delight.

“I get to hire some of the people that I know around town that are looking for work because they’ve been affected through COVID,” he told 614now.

That is, of course, assuming health authorities don’t shut him down first. When we pointed out he was operating the only bar in Ohio still serving after 10 p.m., he laughed heartily.

“Oh, I’m really concerned about [the squirrels] safety. I might just make it a night club on Saturdays from 7-10 and then just call it a day.”