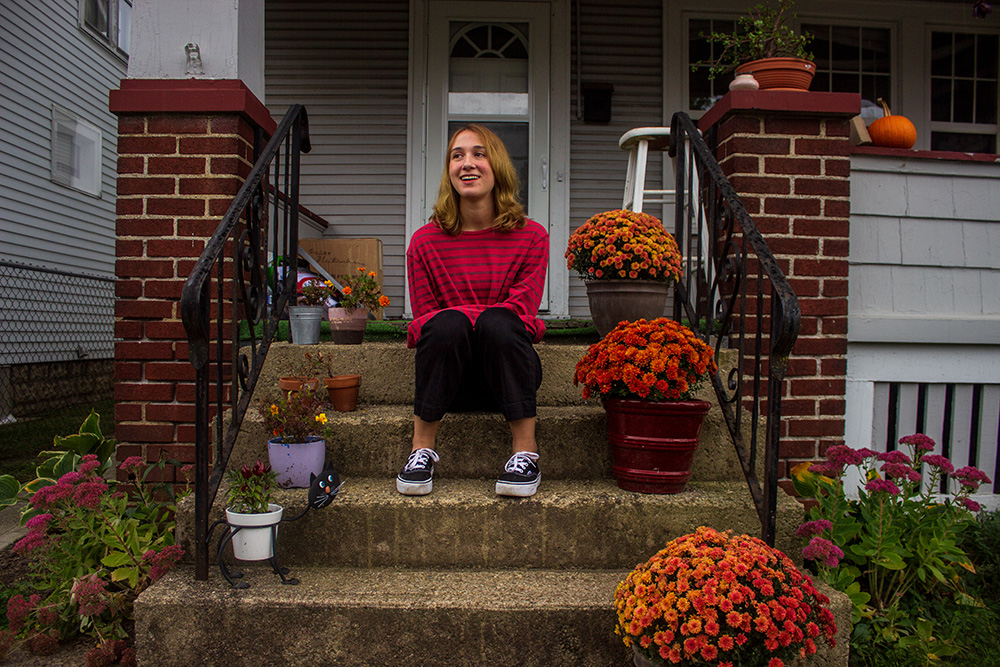 Every week, (614) Music Club teams up with your favorite local music scene people and lets them build a playlist with complete creative control. They also stop by to answer a few burning questions and plug any upcoming performances or releases.

This week’s playlist is brought to you by Sierra Mollenkopf of in-your-feels band First Responder. Recently, Mollenkopf took the time to discuss her thoughts on local music, her favorite holiday, the story behind First Responder releasing two albums in 2020, and to share her personal playlist with (614). You can stream it on Spotify below.

I’m a huge fan of listening to full albums, so I chose some songs that represent great albums that I’ve been listening to on repeat during the pandemic. I also chose all women songwriters because I am especially interested in how they perceive the world around them and translate that musically. Lucinda Williams and Adrianne Lenker (in the form of Adrianne Lenker and Big Thief) appear on the playlist twice because they serve as huge influences on my music taste and in turn my own writing. I end the playlist with “Wrecking Ball” by Gillian Welch because it embodies the bitter-sweetness of looking back on the past and accepting who you are—something that the pandemic has given me plenty of time to mull over.

Halloween has to be one of the biggest days for live music in Columbus, between all of the creative cover shows and spooky traditions like the annual show hosted by classic pop music cover band Popgun at Natalie’s. What have been some of your favorite local music Halloween memories?

Halloween is hands down my favorite holiday. I’m always a huge fan of Halloween cover sets because they really embody the spirit of Halloween—full of campy nostalgia and nods to the great musicians of the past. One of First Responders’ first full-band performances was a Ramones Halloween cover set at Kafe Kerouac in 2016. In the more recent past, I’ve been enjoying $2 pierogi night at Café Bourbon Street for their goth/darkwave DJ night.

I read somewhere that you attended NYU and also Ohio State University. What was the biggest difference you noticed in those collegiate music scenes?

I attended OSU for my undergraduate degree, and it was in Columbus where my first serious interest in creating original music started. I’m a self-taught guitarist and heavily relied on the encouragement of friends to perform. OSU’s music scene has plenty of casual low-stakes venues, whether that’s basement shows, Kafe Kerouac, Spacebar, Café Bourbon Street, etc. These low stakes venues and the scene’s appreciation for experimentation makes the OSU music scene particularly friendly and exciting.

During my graduate studies at NYU, I put a pause on my own projects and served as a fill-in member for my partner’s band, Trying. As a Master’s student, I was pretty unplugged in the music scene at NYU, which undergraduate students usually join through connections made by living in the dorms—though I know that it is pretty vibrant. Since I had a work-study position and field practicum on top of my coursework, I had a packed schedule that didn’t allow for much exploration. Ultimately I moved back to Columbus after grad school for affordable rent and the friends and family I have here. Having graduated from NYU in 2018 and moving back to Columbus that same summer, I’m still learning how to navigate the music scene independent from college connections.

Your band First Responder released its debut album, “Courage,” at the beginning of the pandemic. When we spoke last week, you mentioned that you’re getting ready to release a second album this December. Was the plan always to release two albums in 2020? Will it be a continuation of “Courage’s” personally somber lyrical content?

All of the songs written for our upcoming album, “Earth Angel” (working title), were written between March and August of this year. When we released “Courage” in March I felt like there was a huge weight off my shoulders. Much of the songs were written between the ages of 21 and 23, a time where I was processing a lot of emotion and struggling with trauma and depression. The goal with “Courage” was to document the songs that came to define the First Responder sound. When “Courage” was released in March, we ended up canceling our album release show for what would eventually become the global pandemic.

During this time, First Responder’s bassist Collin Geddis created a “song-a-day challenge” in which he invited friends to create a song a day for seven days as a creative challenge with the newfound time that many of us had due to unemployment and underemployment from the pandemic. Song-a-day helped me to realize my creative potential outside of trauma and personal struggle. Through the exercise, I realized I had so much more to say about existence. My writing moved from struggle to wonder, hope, and longing. Some of the overarching themes of the new album are connection despite isolation, perseverance through movement, and connection to the earth and one’s community.

I was also motivated to release another album this year in following one of my favorite inspirations, Big Thief, the project of Adrianne Lenker. Big Thief released two albums in 2019: “UFOF,” which is lush, dreamy, and heavily produced, and “Two Hands,” which was mostly recorded live and has a raw and warm sound to it. Perhaps our working title of the album “Earth Angel” is a nod to both the cosmic and earthly elements of Big Thief’s sound (and of course the amazing 1954 doo-wop song by The Penguins). Similarly, we live recorded the upcoming album in a barn—save the vocals—and we are excited about the sound of the mix so far.

Currently, First Responder is planning on releasing the singles to “Earth Angel” in late October and November. The band expects the new album to be out in December but doesn’t have a release date yet. First Responder will also be playing a pre-recorded live stream with The Roof Dogs, who recently relocated to Chicago, sometime in October. Details for the stream are yet to be announced.

Here is where you can find Mollenkopf on the Internet: