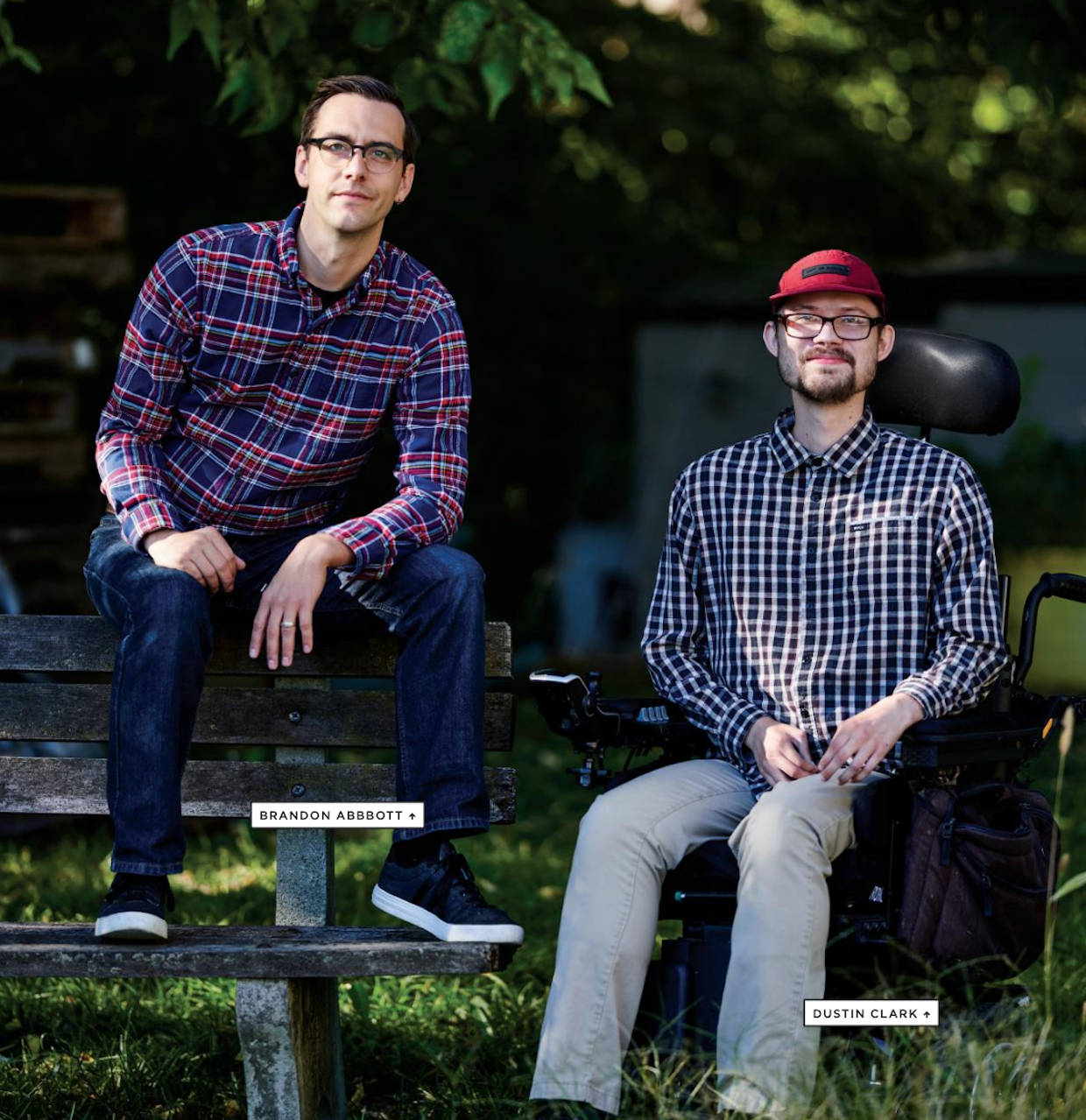 Often when a person becomes disabled, it becomes suddenly clear that the world was not built for him.

Clark, a local musician and graphic designer, is using his massive talent, clear artistic goals, endless fortitude, and a healthy dose of positivity, to make his creative dreams come true, disability be damned. And now his story is the subject of a short documentary from Bexley resident and filmmaker Brandon Abbott titled Dustin Clark: The Humanity in Who We Are, that is being screened at film festivals around the world.

The film, which Abbott directed and produced, showcases Clark’s ingenuity and passion in the face of Becker Muscular Dystrophy, a rare form of muscular dystrophy that affects only 1 in 30,000 males. Clark was diagnosed at age 10.

“There’s just something about how he creates music that makes me want to go out and work really hard to make this film something really special,” Abbott said. “It’s an encouragement to know Dustin because he is constantly learning to adapt to the world around him. Every time I see him, I leave so inspired and energized creatively because of Dustin’s hopeful, creative spirit and the amazing stuff he is doing.”

The pair met long ago when they were in the same church youth group, and both helped with music at the church.

“I was approached by Mike Clark, Dustin’s father, to work on a minute-long video for social media,” said Abbott. “Mike is also a musician and had seen what Dustin was doing and how he was accomplishing it. We got together and they told me the story of Dustin’s process and how he addresses his art. I left the conversation thinking we would film the one-minute piece, but I thought that if this turns out to be what it could be, then we could do a short film.”

And Abbott was right—no way that big, powerful energy of Clark’s would fit into such a small package.

“What inspires me about Dustin is his positivity and how he finds a way to achieve his artistic goals in the face of physical disability,” Abbott said.

Abbott was able to capture on film the nuances of how Clark got to where he is. For example, Clark said he’s always been eager to make music on his terms since he was a boy—not just the boring stuff his piano instructor taught him.

“I hated those early piano lessons,” Clark said. “I think I was a songwriter from a very early age. I just didn’t enjoy learning someone else’s songs; I wanted to make something of my own.”

Today, armed with a guitar hanging from the ceiling and sophisticated computer software, Clark’s innovative spirit has proven that limitations breed creativity. Clark uses programmed bass and drums, but plays the guitar himself. He enlisted the help of his dad and an engineer friend to help him set up his studio so he could make his brand of progressive rock music.

“We sketched out a bunch of different ideas,” said Clark. “It was trial and error, a lot of experimentation. In the end, we came up with a shockingly simple way to do it.”

Although it took eight years to complete, his forthcoming album, Here, was inspired by Clark’s journey of learning to live in the moment, he says. “I spent a lot of time as a young person wishing I could have another life, or be someone else. But I have sort of learned to just love my life as it is. It’s about creativity and making it work,” said Clark.

“Whatever wins their juried prize will be in consideration to be screened with other films of Oscar caliber, and that is really an honor,” said Abbott. “This opportunity speaks to Dustin’s story and how he is able to use his God-given gifts to inspire others.”

Abbott himself being one of them.