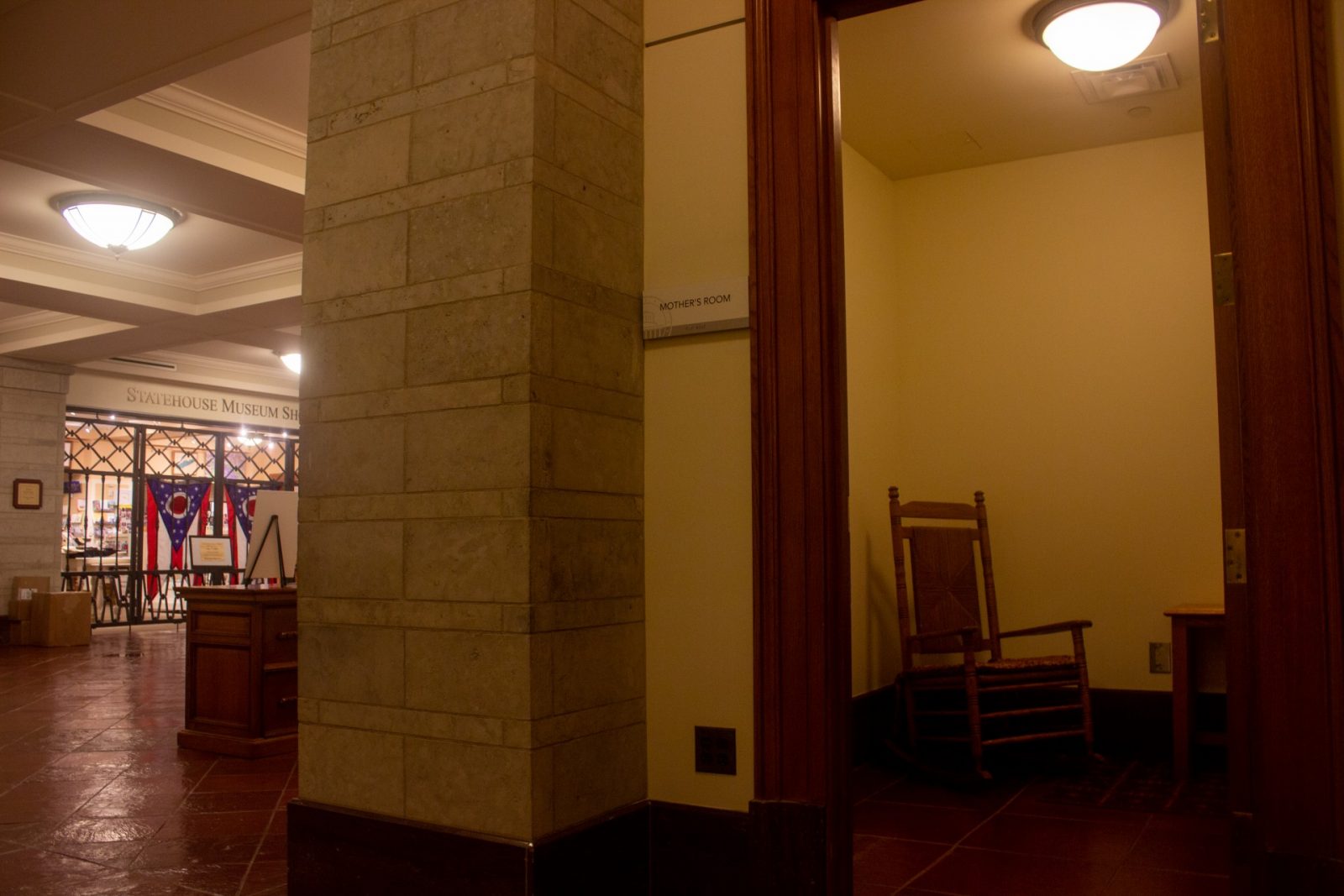 One of the private lactation spaces, located at the Ohio Statehouse, offered on Mamava's app. (Photo by Zak Kolesar)

With August being National Breastfeeding Awareness Month–officially recognized by Gov. Mike DeWine and the state of Ohio as an awareness month in 2019–(614) took a look at the history, benefits, options, and resources for Columbus families when it comes to breastfeeding. There are rare cases in which a woman is unable or not advised to breastfeed, so following the guidance of trained professionals and the resources provided is advised.

One Greek legend tells the tale of a mortal infant named Hercules, so loved by his father, Zeus, that he was placed on his divine stepmother to breastfeed while she was sleeping so that he would be endowed with godlike qualities. However when Hera awoke and saw that she was feeding an unknown infant, she pushed Hercules away, spraying droplets of breast milk that created what we know today as the Milky Way galaxy.

The fact that Greek mythology viewed breast milk as a substance that gave babies divine powers is worth noting. But, that belief isn’t too far off from the benefits that we’ve come to learn about breastfeeding.

Not many other options

Now, whether or not there is any truth in old myths, in ancient times mothers didn’t have many other options for feeding their children. Artifacts such as breast-shaped clay bottles have been found that show milk may have been stored or pumped, but all signs point to breastfeeding being the primary way to provide their children with adequate nutrition.

And if a mother didn’t survive, another mother would nurse the surviving infant.

“That was the only way babies survived back then,” said Ann Davis, a leader at the Le Leche League of Ohio for the past 25 years. “There wasn’t anything else you could do.”

Up until about 120 years ago, breastfeeding was the primary choice of nourishing a child in the early stages of life. The change came when commercial methods were introduced and marketed as a better alternative to breastfeeding. This “formula” created by scientists has caused many differing opinions on breastfeeding over the past century.

In the mid-1950s, breastfeeding was at an all-time low. Not only were commercial formulas being pushed to women, but with the rise of the industrial revolution, more women were working away from the home.

La Leche League, an international organization started in Illinois in 1956 to raise breastfeeding awareness, has been working for breastfeeding mothers by providing  a club and online support to help shed the stigma around breastfeeding that arose from the introduction of formulas.

“It’s an organization that has deep roots in my family, and it was something that supported me when I first had my kids,” Davis, who runs the administrative end of the La Leche League of Ohio Facebook, said. “So I knew that I would go on to volunteer with it now.”

“What we like to promote in our meetings is being able to talk to other mothers about what breastfeeding looks like, kind of getting real about what roadblocks they run into, what things that they did to help make breastfeeding work better in their early days,” Davis said.

On Sept. 16, 2005, it became Ohio law that “a mother is entitled to breast-feed her baby in any location of a place of public accommodation wherein the mother otherwise is permitted.” It’s also permissible to do so in all 50 states.

“What we want to do is we want to shift the cultural thinking of our population in Ohio and show people that they can be comfortable with it, that this is not an obscene thing, “ Davis said. “This is not exposure, indecent exposure, which the law has declared.”

And, even with a law in effect, there needs to be space for mothers who are not comfortable with breastfeeding in public. Luckily, there are solutions available around Columbus, if you know where to find them.

Apps like Mamava and Pumpspotting provide mothers with the ability to locate lactation spaces in the area. In downtown Columbus, there are Mamava lactation rooms in three locations, one of them being the Statehouse. Mainly, these rooms are used for mothers pumping milk, but they are also available to all breastfeeding mothers.

“Some people are just not comfortable with the idea of breastfeeding in public, and that’s OK. We want those moms to feel comfortable,” Davis said.

Working mothers may face additional hurdles with breastfeeding in the workplace. Davis cites the Ohio Women, Infants & Children Program (WIC), which has a team of peer counselors, as a good resource to reach out to for anyone facing workplace discrimination from breastfeeding. For more ways on how WIC supports breastfeeding mothers, click here.

Davis said that the early rise of formula came from dairy farmers having an excess product to sell: “It’s purely the crash of marketing and the industrial age”.

The extra nutrients included in breast milk haven’t been able to be replicated in any type of formula yet. However, Davis does say that the formulas made available today are a much better substitute than the leftover dairy products that have been pushed out to the public in the past.

Davis, however, recognizes that not all cultures are made fully aware of the benefits of breastfeeding and are sometimes steered away from the natural method.

“One of the biggest issues that we’re trying to address and work on right now is the racial disparities in breastfeeding and the massive differences between breastfeeding rates among blacks and minority populations and people of color,” Davis said.

According to a PBS report from Aug. 2019, there was a 16% disparity in breastfeeding between white mothers and Black mothers in the United States.

Davis wants to shed light on the racism that exists in the healthcare system, noting that Black families are often pushed formula, denied resources, and more often separated from their children upon birth, denying them of the golden hour at birth that promotes breastfeeding.

Many Black families work hourly jobs and don’t have the ability to take parental leaves, so they are unable to build a strong breastfeeding bond with their child. Being on government support while at school also means that student mothers are oftentimes forced back into the classroom a week or two weeks after giving birth.

Davis suggests those who would like to learn more about the significance of breastfeeding to get in contact with the Ohio Breastfeeding Alliance or the United States Breastfeeding Committee.

The powers of breastfeeding

Access to breastfeeding knowledge gives families what they need to plan how to best feed their new baby. There are many options available including direct breastfeeding, pumped milk, and breast milk from another donor or wet nurse, so that a family can benefit from the use of breast milk for their child.

While infant formula does have the power to help with muscle development, breast milk helps with brain development as well.

“That’s something that we didn’t even know until recently, that the components of breast milk will drive brain growth in humans, which is much more important than muscular growth,” Davis said.

As a living substance, breast milk also has immunological components that help strengthen the child’s immune system. Without breast milk, children could be missing out on facets of human development that haven’t been discovered yet.

The Ohio Department of Health says that breastfed infants have a reduced risk of diseases such as asthma, type 2 diabetes, ear infections, and Sudden Infant Death Syndrome (SIDS). The ODH’s recommendation on the term of breastfeeding is about six months.

You can read more about the many benefits of breastmilk here.

Breastfeeding Tips: What to Expect