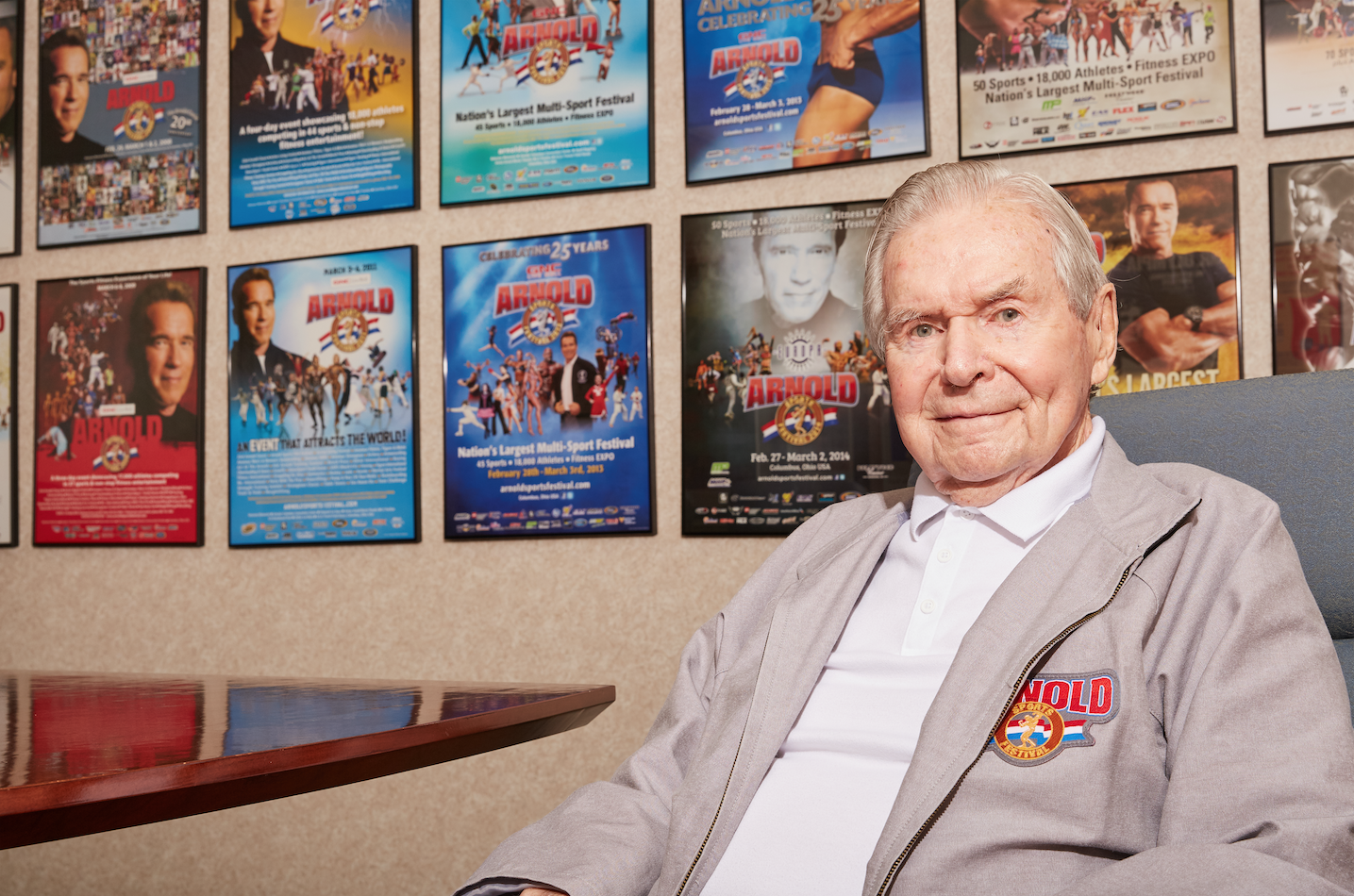 As a trailblazer in sports promotion, Jim Lorimer has opened doors for countless athletes.

The unassuming exterior of the Arnold Classic Worldwide headquarters does nothing to betray the treasure trove of riches within. Inside the nondescript beige building in a Worthington office park are countless trophies and awards, depictions of Arnold Schwarzenegger from his bodybuilding heydey rendered in both oil and bronze, and more than one sword from the 1980s big- screen adventure Conan the Barbarian.

More impressive than any of these material things is the history this place represents, the far-reaching impact of which could never be contained by four walls. It is where the keeper of that history can sometimes be found— the one who lived and shaped it, along with countless lives around the world and over many decades.

At 93 years of age, Arnold Sports Festival Co-Founder Jim Lorimer still works seven days a week. To say that he’s accomplished a lot in his time is a massive understatement.

“I’ve been fortunate to have a lot of opportunities,” the effussive and humble Lorimer says of his many achievements. He’s the kind of person who you can speak with for an hour and still only scratch the surface of his story. Details that could serve as the focus for an entire profile—his having served as the mayor and vice mayor of Worthington for 52 years, for example—come and go almost as footnotes.

Among his varied accomplishments, a few stand out. A successful career in high school athletics as a champion of track and field and captain of the football team. A stint in the US Navy, then on to law school, followed by a role with the FBI. More than any of these things, one feat stands above the rest in Lorimer’s estimation.

“I’ve had an opportunity to do a number of things, and have enjoyed them all. But the most rewarding of all is what happened with the Arnold Sports Festival,” he said.

Featuring 22,000 athletes from 80 nations representing more than 80 sports, the Arnold Sports Classic is Columbus’ signature event— in athletics or otherwise—as well as the largest multi-sport event in the world. (For a sense of scale, around 14,000 athletes took part in the 2016 Summer Olympics and 2018 Winter Olympics combined).

While competitions at “The Arnold” showcase the best of sportsmanship and healthy competition, the event as we know it would never have happened if not for a war—the Cold War, to be exact. That, and an exceptional group of teenage girls.

“During my years in the FBI in the 1950s, I was involved in the intelligence field. In that period, the big challenge was the Soviet Union, and I was interviewing communists all the time,” Lorimer recalls. “The communists were reasonably intelligent people, but they would insist with me that the communist system was superior, and that we were going to be living

under that system in the future. Of course, I did not agree with them on that.”

Throughout this era with its highly- contentious geopolitical climate, sporting contests were just one of the many venues in which the USSR would attempt to showcase the supposed superiority of its way of life. In the 1950s, the communists began to recruit a strong body of athletic talent who were trained at a professional level in their various sports for the sole purpose of dominating the West in athletic competition.

In 1959, American athletes faced off against the elite talent of the Soviet Union at an event in Philadelphia. By then, Lorimer was out of the FBI and had moved on to an executive position at the Nationwide Insurance Company in Columbus. A lifelong sports fan and a curious observer of communist tactics, Lorimer travelled to Philly to watch the proceedings in person.

“The U.S. men, because of their great interscholastic program, managed to beat the Soviet track and field athletes, even though they had been training essentially as professionals for almost a decade,” Lorimer remembers of the event.

The women’s competition was another story.

“In the high jump, for instance, the woman representing the United States was doing what we call the ‘scissors’ high jump. That’s where you just sort of step over the bar, like in grade school,” Lorimer explains. “The Soviet girl was doing what was in the Western rule, and she jumped almost a full foot higher than the U.S. girl.”

At the conclusion of the weekend’s events, scores of the women’s and men’s teams were combined. The Soviet’s totals narrowly edged out those of the US team. The next day, Philadelphia inquirer published a headline that went out across the globe: “Soviet Team Beats U.S.”

Lorimer knew that the U.S.S.R. would use this win to trumpet the superiority of communism, when in reality, it was only a result of female athletes in the US lacking the training needed to compete.

“I said, ‘I could find a girl right here in Worthington and show her immediately how to jump higher than that girl on the U.S. team,’” Lorimer recalls. And he did just that.

Lorimer contacted a friend who happened to be the Worthington track coach, and asked him to identify the best 14 or 15-year-old female track athlete. The coach pointed him to a student named Melissa Long, a girl who raced against (and beat) male track competitors in her age group.

When Lorimer contacted Long about training for track and field events at the national level, the young woman jumped at the opportunity. From there, he mined the top female talent from a Junior Olympic competition put on by the Columbus recreation department at The Ohio State University, and the Ohio Track Club was born.

“As I contacted them and their families, the reaction was the same as it had been when I contacted Melissa,” recalls Lorimer. “Here was a girl who didn’t have a chance to express herself athletically at all, and they were in heaven that somebody wanted them to come and compete.”

And compete they did, winning numerous meets on the 1960s indoor track circuit across the east coast. “In New York, the main indoor meet is the Millrose Games. These girls were winning—they won the Millrose Games, they won everywhere they went,” Lorimer said.

Lorimer’s success with the fledgling squad eventually led to his appointment as a member of the U.S. Olympic Committee for Women’s Athletics, which he would go on to chair. For his proven sports promotion acumen, he was later tapped to organize the National Weightlifting Competition at Veterans Memorial in 1967, and then the “Mr. World” Competition in 1970, which added the draw of a bodybuilding competition to a traditional weightlifting meet.

That first Mr. World event brought a young Austrian phenom to Columbus, and the rest is history. Impressed with Lorimer’s skills as an event runner and promoter, Schwarzenegger vowed to return to Columbus upon his retirement from competition and partner with him for an event that would raise the profile of bodybuilding to a global audience. The two came together over a handshake deal that would create the foundation for the Arnold Sports Festival as we know it today.

Through his decades of achievement in a landmark event that has helped shape the lives of countless athletes from across the globe, Lorimer has never forgotten where it all started. Every five years, he reunites with the group of special women who made up the first Ohio Track Club team, whose achievements paved the way for generations of female athletes to follow and who served as the forebears of Title IX legislation that guarantees equal treatment for female athletes to this day.

“They were 15 and now they’re all age 75. Every one of those girls graduated from college, and they have six master’s degrees, three PhDs and one Harvard Law School graduate,” Lorimer says with pride. “They all tell me that the most significant opportunity they had was the opportunity to express themselves competitively. That sports experience affected their lives, and that’s what still drives us, that we’re affecting so many lives. If you have 22,000 athletes coming in, that means a lot to our community and it’s a lot of kids learning the important lessons you get from something like sports.”

Lorimer sums up one of those important lessons: “The primary lesson of sports that is also true in life: you get back pretty much in proportion to what you put in.” Coming from someone who has achieved what Jim Lorimer has in his lifetime, it’s advice worth taking.

To learn more about the history of the Arnold Sports Festival and for details on its upcoming events in 2020, visit arnoldsportsfestival.com.