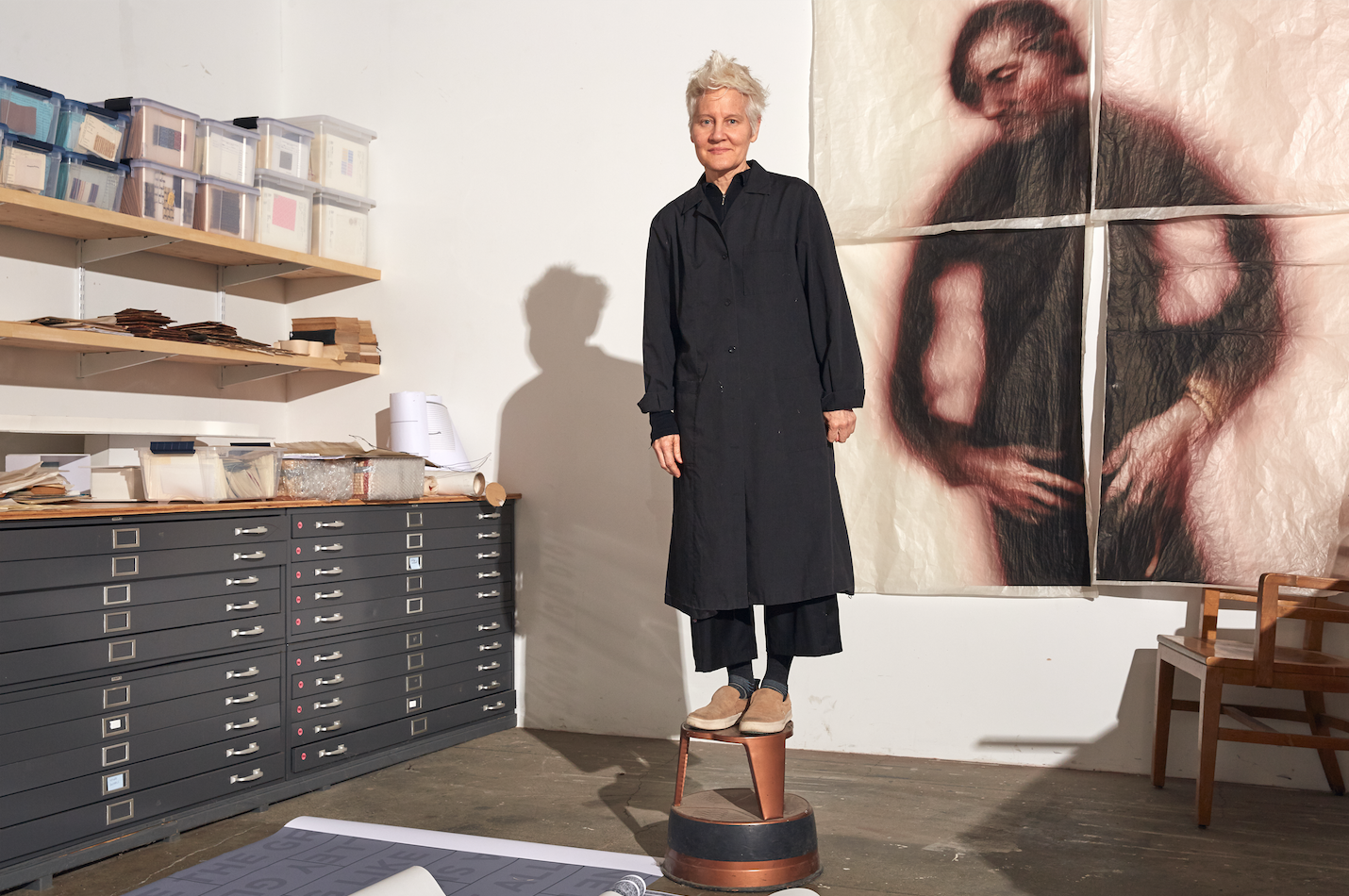 Artist Ann Hamilton ensures her viewers are not passive bystanders.

Sometime this week, this month, you might receive an envelope in the mail, nestled among the barrage of holiday gifts and well-wishing cards from family and friends.

You open it to find not a family picture or holiday greeting, but a dated photographic scan of a single fallen leaf. It appears stark on the page: quietly elegant, strangely canonized, its veins and creases made beautiful after being blasted with light.

This scan would represent a small part of Columbus-based artist Ann Hamilton’s project when an object reaches for your hand, an interactive installation currently on display at OSU’s Thompson Library. The work encourages viewers to take pieces from the exhibit that Hamilton has created and share them with one another.

Hamilton, a professor in the OSU Department of Art, is also undeniably one of the most prominent and lauded names in the world of contemporary art. With a portfolio that includes decades-worth of large scale multimedia installations and other work, the Ohio-born artist has earned herself coveted Guggenheim and MacArthur Fellowships, among countless other honors.

Because of this, Hamilton could likely call any place in the world home. Yet she chooses to do so in Columbus, where she now both teaches and operates out of her locally-based studio.

“You know, you don’t really know the consequences of those decisions at the time, but I can really see how being here, having that family support, the economy of Columbus, being able to have this space, and my affiliation with the university; all those things have led to my being able to develop practice that responds to a lot of different forms of work, and I’ve really been tremendously supported. The way that I’ve been able to pursue projects has been a consequence of all that support,” she said.

“When I moved here, Columbus wasn’t one of the “move-to” cities; people were asking me what I was doing. Sometimes what’s good for you is also good for the work and I have to trust that will be the case.”

Hamilton’s when an object reaches for your hand, displayed as part of Here, a recent exhibit at the Wexner Center for the Arts that also featured pieces from artists Jenny Holzer and Maya Lin, shows the benefits of this support in more ways than one.

“We have a fabulous public and university library system. When I was invited to do the new project at the Wexner, I was also already thinking about doing a project in the library,” she said. “You know, partly, ever since the library opened, I’ve always thought about that vertical glass spine where you can see the stacks, and the two sides of that is this amphitheater space, inviting sociability, inviting potential performance.”

Using outdated scanners, some likely nearing 30 years old, Hamilton and her studio team scanned hundreds of different items over the course of nine months from personal and university collections, which were then printed on details paper and stacked on irregularly-arranged platforms throughout the library’s second floor.

Due to the scanners’ age and shallow depth of field, the images created by them (which often featured unique or rarely-seen items), became ghostly, and quietly beautiful in their own right.

But Hamilton’s work is about more than just the acts of crafting and display. Visitors to when an object reaches for your hand are more than static viewers; they play an integral role in the work itself.

Each person who sees the show is invited to take one of the scans displayed in stacks throughout Thompson Library, either to keep for themselves, or to mail to a friend or family member via a mailing station at the installation.

In this way, the work becomes a platform for connectivity, for people to share the things that move or matter to them. In the same way that Ohio State and the private collectors Hamilton worked with shared their prized items with her, viewers are able to do the same with whomever they choose.

“Everyone I talked to was so helpful; people want to share what they love and what they take care of. What an incredible gift that is. We were able to wander in and out of so many different parts of the university. I would say the piece isn’t so much site-specific; it’s just responsive to what is here, to that spirit of wanting to share,” Hamilton said. “This is why the mailing is so important, wanting to share what comes forward in the collection. When you mail something, it’s still carried by hand; the address is written out by hand. And that’s also about touch, and touch is what’s made visible through light in the images.”

This sense of community and shared details is also apparent in how Hamilton manages her Columbus studio. Located in an unassuming but spacious building just south of downtown, Hamilton both works out of the building and uses it to host collective dinners, where visiting artists and speakers are able to interact with invited OSU arts faculty members and students.

“The events get set up and everybody sits together and it’s a beautiful meal. We have candles, wonderful food, and I think it’s part of what we do through positions at the university,” she said. “It’s a chance for people to actually be in conversation. Like, for example, with the architecture of our art program, there really isn’t social space, and so I hope in some part this addresses that.”

And even though Hamilton is now one of the figures firmly entrenched in the canon of contemporary American Art, it wasn’t a vocation that she necessarily saw coming.

In fact, she couldn’t recall a moment that she said to herself that she wanted to be an artist; she simply made art. “There’s some large gap between recognizing you love something and calling yourself something. I just grew up loving making things, and I had a ton of support from my family,” she said.

Hamilton has learned from her adventures, and as a professor, has opportunities to share her wisdom. “It was never a straight road,” she said, “but I always tell my students: do what you love.”

Hamilton’s when an object reaches for your hand is on view in Ohio State’s Thompson Library through April 28. Learn more at annhamiltonstudio.com.