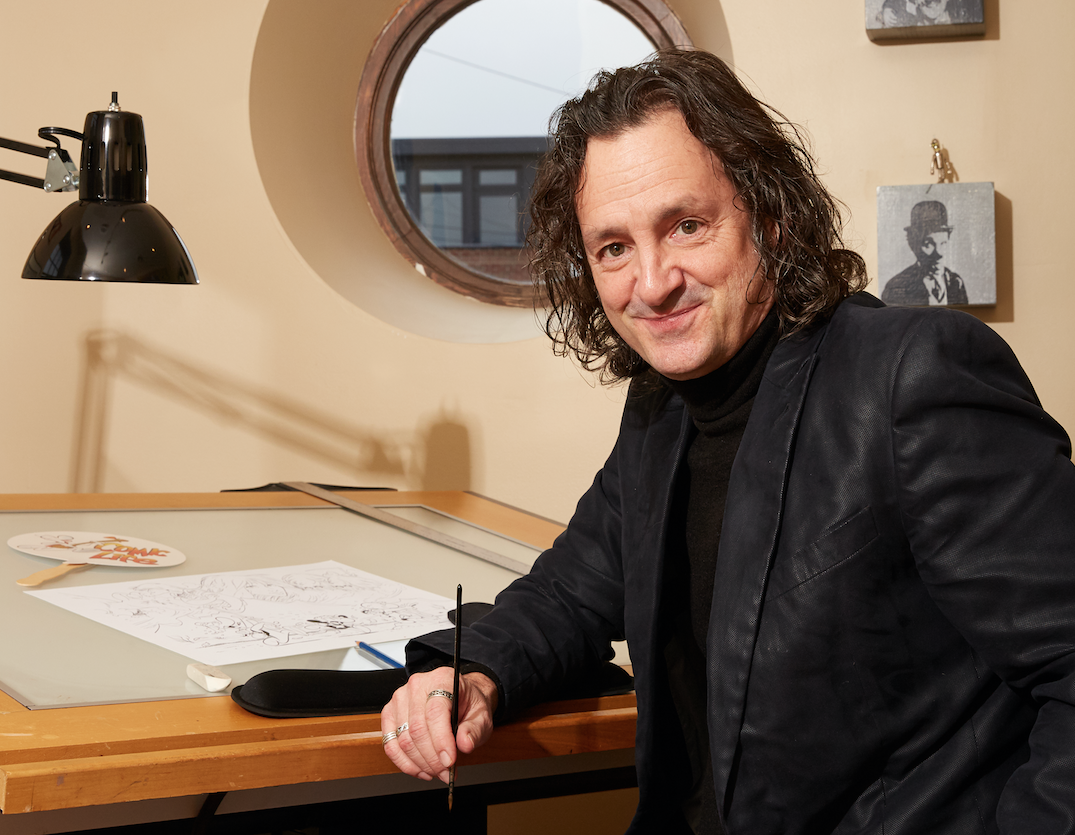 Starting in the pages of the Lantern, Jeff Smith’s comic series BONE will finally be coming to Netflix. It only took three decades.

Being at the right place at the right time is rare in any industry. Jeff Smith is the exception several times over.

An a able ambassador and native son of Columbus, Smith’s infatuation with illustration and storytelling emerged early and in equal measure, creating his first characters when he was five, which evolved into complete comics by the time he was 10. The Columbus College of Art & Design helped hone his craft, and the prototype for his acclaimed series BONE appeared in Ohio State’s student newspaper The Lantern at length. Just as independent comics were breaking into the mainstream, the self-published creator became both a folk hero and a rock star of the emerging scene, inspiring artists and earning industry accolades, including ten Eisners, essentially the comic world’s equivalent of the Academy Awards.

But there were also some setbacks just now being set right. A failed Nickelodeon effort to adapt BONE for television in the ‘90s, followed by a similarly stalled big-screen project by Warner Brothers, ironically paralleled the saga of Smith’s cartoon characters navigating a foreign landscape in an unforgiving world. But Smith took all of it in stride, and bided his time. This past October, Netflix announced the long- awaited animated series fans new and old had been long-denied, a project that just as easily may not have happened. Much like Smith’s history of impeccable timing, he seems to have arrived again at just the right moment in popular culture.

“I made a deal with Warner Brothers a decade ago, and they hadn’t done anything with it. They optioned it for two years, but I wasn’t particularly happy with the direction it was taking and didn’t want to renew. Then they purchased it outright and told me to sit on the sidelines,” Smith recalled. “But it was in the contract that if they didn’t make a movie within ten years, then the rights reverted back to me. So I had to wait. It was such an unpleasant experience, I decided I didn’t want to sell it again. But word got out and I started getting calls from streaming services and Netflix was the best match. That’s how it happened.”

Motion picture and television rights are esoteric legal devices that often give studios and networks the “option” to turn a story into a lm or series within a given span of time. They come with lots of conditions and fine print typically serving those purchasing them, but occasionally those selling them. It’s a way to buy time, but also ensure projects don’t stay idle indefinitely.

“BONE was really an early mashup, before that term existed, of comedy and swords and sorcery. It was Bugs Bunny meets Lord of the Rings. I think it’s got to be the comedy and the combination of characters that made it popular,” Smith said, speculating on the mystery behind the series’ somewhat unexpected success, even internationally. “BONE is published all over the world. It’s still weird to pick up one of my stories and see the characters speaking French. If I knew the secret, I’d do it again.” A decade ago, Netflix was mostly dropping DVDs in the mail and was producing zero original content. A year later marked the premiere of AMC’s The Walking Dead, a television adaptation that was so dicey at the time, they only gave the first season six episodes. Now Net ix accounts for more than half of all internet traffic in the U.S. on Sunday night, and The Walking Dead draws more viewers than all Sunday NFL games combined.

“The real problem we had with Warner Brothers was making a 1,500-page book into an hour and a half movie. It couldn’t be done, so it didn’t get done,” he said. “But a streaming animated show was perfect; it’s just like the comic book. It’s serialized and can progress chapter by chapter. It was the right time, and the right company.”

Netflix isn’t the only streaming service clamoring for content, and it’s easy to forget House of Cards, their first original series, only premiered in 2013. With Amazon Prime and Hulu well- established, and Disney and Apple both investing heavily in production for their own freshly-minted subscription services, Smith again seemed to capture the right moment to reach the right audience, all while maintaining the artistic integrity of BONE.

“We’re still looking for showrunners. If everything goes well, we’re hoping to have shows in the fall of 2022. I’ll be a creator on the show and an executive producer, but it’s really just one more project,” Smith noted. “I still want to draw comics. I don’t need to be out there the whole time. Once the show is up and running, I can work here.”

As if BONE alone weren’t a sufficient source of inspiration for veteran and aspiring comic artists, Smith is also a founder and the artistic director of Cartoon Crossroads Columbus (CXC), an annual, and increasingly international, celebration of the city’s commitment to illustrated storytellers across every genre and format. But even before CXC, Columbus was arguably already a comic town. From esteemed exhibitions at the Columbus Museum of Art and the Wexner Center to nationally renowned institutions like the Billy Ireland Cartoon Library & Museum and Thurber House, our city has always recognized comics as art worth appreciating as much as any medium of creative expression.

“The idea behind CXC was that it would be more like a European show and not be all in one room at a convention center or hotel. It would be at different venues throughout the city. But it would also be a show that was more collegial, that would nurture comic creators and encourage connections,” he explained. “When I grew up here, there were neighborhoods in Columbus where you wouldn’t go at night. Now we’re a chef-driven town with galleries everywhere. We’re a cultural crossroads. It’s why we wanted to have events all over town, to showcase the city. And it’s working. People will go to an exhibit at the Columbus Museum of Art, then go to an event at OSU and stop in the Short North along the way, grab a bite to eat and talk about comics.”

Even as he prepares for the production of BONE the streaming series and the sixth year of CXC, Smith sees the similarities in both projects and the role he plays—getting the right balance of characters working toward the same goal and creating a story that compels audiences to return.

“You have to start each with a recap, so everyone knows the story so far. Tell your new episode, then end it with a cliff hanger,” Smith explained. “That’s the secret to any serial, whether it’s a comic, a television show, or a convention. You have to give people a reason to come back for more.”

To learn more about BONE and Smith’s other work, visit boneville.com.