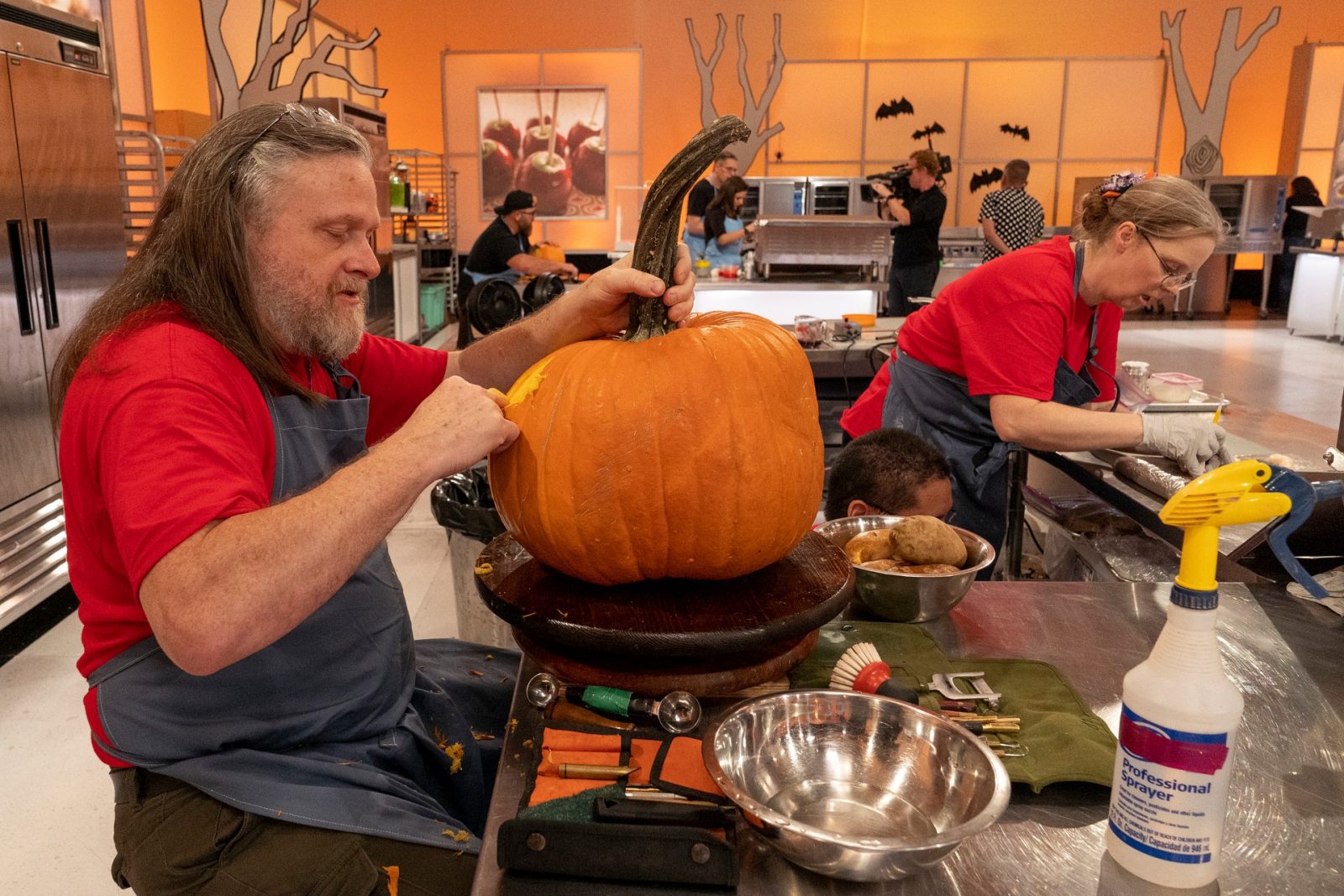 Deane Arnold takes his talent to Food Network and back again

Arnold is an animated, shoot-from-the-hip talker who deals out smiles and laughs almost every minute. He loves to talk about his craft and warns, at the start of an interview, “If you ask me an open-ended question, I will babble.”

And his craft—what hasn’t he done? He’s known for illustration, painting, photography, T-shirt design, sculpture, commercial design, and even music, although he will dabble in almost anything that catches his interest.

When asked what he’s into these days, besides pumpkins, he laughs, “Is there anything other than pumpkins?” For the last few years, he has focused almost exclusively on carving pumpkins and other vegetables. His dedication paid off, earning him an invite to “Halloween Wars” on the Food Network, as part of Team Ghoulicious. He admits originally struggling with the decision to participate in the competition show.

“I’m pretty well known in the pumpkin world; we all pretty much like each other, so the idea of ‘going to war’ felt kind of ironic. I would go somewhere, and competitors would joke, ‘Deane’s here. We can go home now.’ And I’m not a competitive person.”

The hectic environment was another challenge. Arnold’s approach is meticulous; the competition often borders on frantic. “I’m used to digging in and focusing. And in addition to sculpting, I had to help build the display, which Ray and I do, but it takes an entire day. They needed it all as quickly as possible.”

His pair of road-tripping pumpkins, disturbing and subtly gleeful, in the Season 10 premiere impressed the judges and were enough to keep Team Ghoulicious in the competition.

Arnold says the talents on display in “Halloween Wars,” are more from his journey with other artists, versus formal training. He grew up in the Hudson Valley and migrated around the country as an adult before settling in Reynoldsburg, where he can be seen on his front lawn, carving, on Beggar’s Night.

“I don’t have a lot of formal training, but I resist calling myself ‘self-taught’—everyone learns from somewhere, whether it’s formal education, higher education, mentoring,” he said. “I learned from everybody that I’ve ever worked with, everybody that I’ve ever worked for, but my last formal training was in high school. I had an art teacher who literally tore her hair out, she was so frustrated with me.”

He met renowned pumpkin sculptor Ray Villafane through an exhibit at Franklin Park Conservatory, immediately struck up a friendship, and started working with Villafane Studios in 2015. Their shared “10-year-old’s” sense of humor leads Arnold to refer to themselves, tongue-in-cheek and publicly, as “The Moron Twins.”

“We’ll work from 7 a.m. to 2:30 a.m., and then one of us tells a stupid joke, and we’ll fall out laughing, and scrap everything we’ve been doing all day and start over.”

Arnold searches online for inspiration and keeps a mirror nearby to sometimes reference his own quirky expressions. “I have a general impression of what I want, and I start and just let the pumpkin go wherever it goes.

“But I’ve found that the face itself is not enough. What really engages people is if there’s a story attached to it.”

That face takes, on average, from five to twelve hours to complete. One of his most popular carvings is the pumpkin-headed figure, with a tense, constipated expression, straining in the outhouse. “Out of context, that face doesn’t make sense. It’s just some guy holding his breath.”

Arnold teaches all levels of carving online, to veteran competitors of Food Network’s “Halloween Wars” and “Outrageous Pumpkins,” as well as beginners with their first sets of tools.

His style of carving wry, expressive faces that rarely break into the center of the fruit, echoes his painting style. “In my painting, I moved from photorealism into a sort of heavy impressionism, with less of an emphasis on detail. That’s now carried over into pumpkins.

“What I find is that everybody wants to dive into the details at the expense of the basics. Most sculptors go straight for lines, creases, fangs, wide, staring eyeballs. Everyone talks about details being the most important thing. In my mind, details are the least important thing.”

He waves a white ghost face carving with a “Woooooo!” and continues, “I’ve been staying away from details and going for a smooth, nuanced look. It’s all forms and planes.”