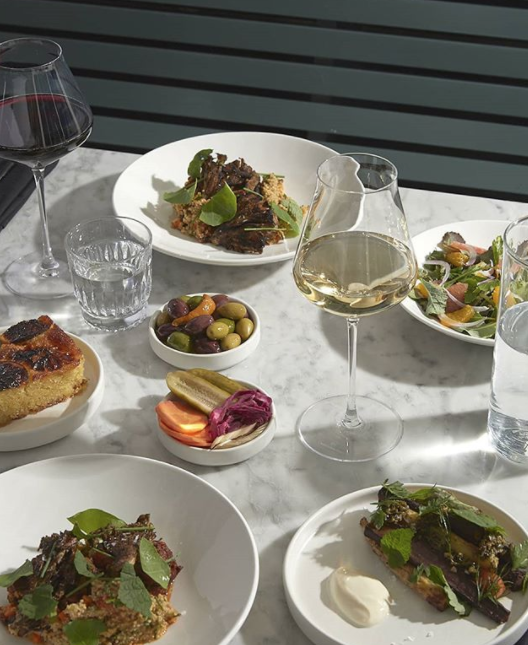 Since its opening in 2019, Comune, the Parsons Avenue veggie-forward eatery, has gained plenty of notoriety throughout the city of Columbus, but similarly is no stranger to turbulence in the restaurant industry.

Originally started by Joe Gelatti and Brook Maikut, with a menu headed by Ben Kanavel, the restaurant quickly established itself as one of the go-to dining spots in the city for their minimalist atmosphere, incredible take on vegetable cooking, and applauded wine and cocktail selection. Not long after entering the scene, Kanavel announced his departure from the restaurant leading to a scramble to continue building off that early success.

It was around this time that Jacob Inscore became head chef of the restaurant pulling upon new influences and revamping the menu that would go on to earn him a space on Columbus Undergrounds Best Chefs List for 2019, as well as a best restaurant spot for Columbus Monthly, among others.

But with 2020 comes a new slew of challenges, the largest of which was the effects of the pandemic,leading to the restaurant halting all operations March 19. As many restaurants in Columbus begin the process of reopening, many have wondered what it meant for the eatery.

The announcement for reopening plans came via an Instagram post detailing plans for a dinner for two, carryout style service that will feature three courses as well as a snack and dessert. Dinners will be available online for pickup on Saturdays along with a selection of natural wines that will be for sale.

WE ARE BACK (with limited capacity). Beginning this Saturday the 27th and for the next 4 weeks, 100% of our profits will be donated to local organizations supporting the Black Lives Matter movement. Comune will be offering a limited quantity of pre-order take out dinner kits for pickup this Saturday, June 27th. Chef Jacob has created a “Dinner for 2” (or maybe just for one, no judgement): 3 courses + snacks + dessert. A bit of love and time for reheating once you get home is required. We also have a handful of wines that we will be selling at retail if you’d like to scoop one (or more) to go with your dinner. We hope to continue this style of service for the next 4 weeks, but with a new feature each weekend! Ordering will open after new menu announcements early in the week, and pick-ups will always be a weekend evening only. Head to our website (link in bio) or give us a call. *We are opportating with very limited staff & practicing social distancing. Masks will be required for Saturday pick-ups; we will have a few on hand if you forget yours. Contactless pick-up available upon request.

When asked about plans to reopen fully, Galati said “We don’t really know what the future holds, and with the size of our restaurant it’s hard to deliver the experience we want guests to have. We would much rather focus on takeout and how to expand on that.”

If their past is any indication, whatever the future holds, Comune is sure to weather the storm and come through.