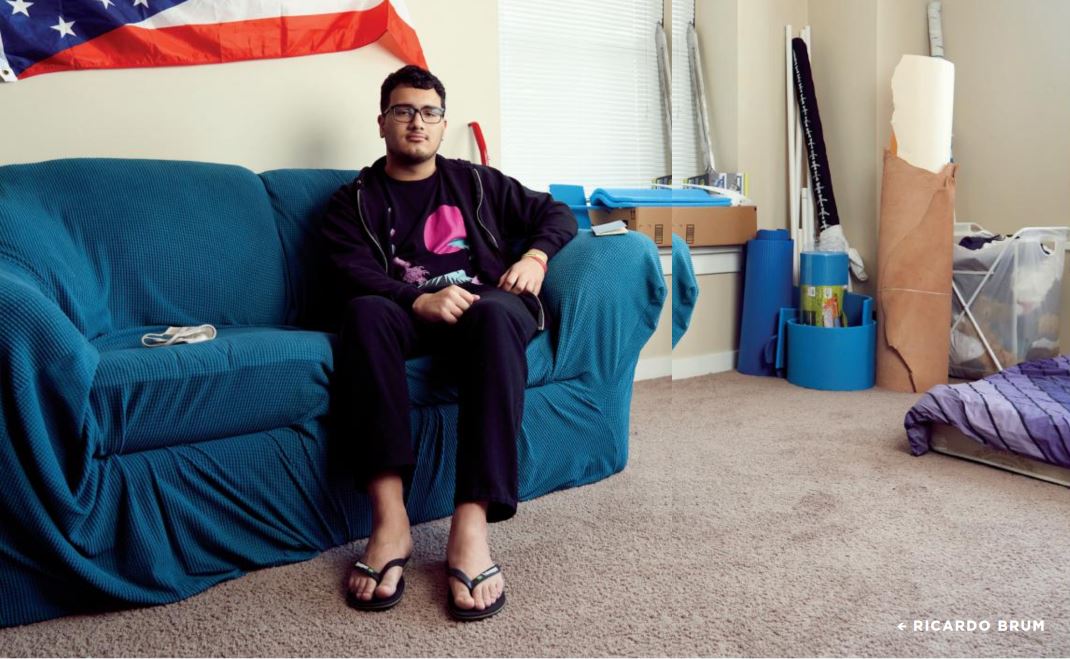 Lightning strikes back at Blue Jackets

Shutdown. Quarantine. Isolation. However you want to label it, the fact remains that COVID-19 has not only attacked our physical health but has affected our mental health in ways never experienced before.

International students, in particular, have had to face several distinct challenges since the pandemic swept the United States. Coming from a different hemisphere and having almost immediately to make a decision about either going back home at the onset of the pandemic or waiting it out, was just the tip of the iceberg for Columbus’s international student body.

Take CCAD student Yu Wang, for example, a first-year illustration major, who just completed his second semester at CCAD. He found his first semester to be a pretty regular preliminary international student experience. The second, however, following a series of lockdowns and international travel shutdowns that prevented him from flying home, gave him a reason not to continue his studies in the United States.

“Here I feel very lonely [with] no friends [and] no family here,” Yu said of the painful isolation COVID has caused for international and domestic students, alike.

His girlfriend Bela, a Chinese transfer student at CCAD, went through an equally frustrating process that many international students have also encountered —the back and forth booking and rebooking of flights that are frequently canceled with very little notice. She finally did secure a flight on May 21, when the United States Embassy gave her just three days warning before she would have to return home.

This has become a common occurrence among international students studying in the United States, especially at CCAD, where Liz Gordon-Canlas, director of residence life and housing, discussed the difficult reality for international students during COVID. One student, having packed up all of their belongings and turned in their room key, got into an Uber only to have their flight canceled before they reached the airport, Gordon-Canlas recalled.

“So, at a certain point, students just decided that they were going to stay either because they couldn’t afford the flight, because the flight kept getting canceled, or because they were fearful that if they were able to get home, would they be able to return to the U.S. for their fall classes?” Gordon-Canlas said.

The money is no small hurdle either. While international students are accustomed to extremely pricey flights (leaving many to stay in Columbus during the school breaks in the winter and summer), flights during COVID were hovering between $8,000 and $9,000 one way. In non-COVID times, flights were still relatively expensive, as Yu paid between $1,000 and $2,000 per one way ticket. Yu had one of those $8K flights booked on April 10; the flight was canceled and changed to May 24 before it was canceled again and changed to June 12, which also fell through.

Ricardo Brum, a Columbus State Community College student who also completed his first year as an international student this spring, and plans to transfer to Ohio State as a journalism student after two years, has been all over the world. He chose to study abroad in America because he was curious about the United States and wanted to add to his personal experience.

“I try to live in different areas of the world to see how society is there,” Ricardo said. “It helps me broaden my horizons.”

Going to college in the United States was a somewhat easy sell for Ricardo. In Brazil, his parents’ generation viewed America as a “magical place” and so values U.S. degrees highly. Many who did not have the opportunity to pursue higher education for themselves idealize the American university system and the size of the U.S. economy, which factors into the decision to send their children abroad to study.

But recent events in the United States have led them to believe otherwise. First the COVID lockdown, then the protests that erupted in June and July following the death of unarmed Black man George Floyd. Minneapolis police officer Derek Chauvin, who is white, was charged with murder in Floyd’s death. The incident led to an uprising in the United States under the Black Lives Matter movement.

The protests, sometimes violent, caused them to believe that the “magical place” is perhaps more like Kansas than the land of Oz.

“Seeing something like that happen in a developed country, I think that these kinds of things are still a struggle here,” Ricardo said. “I mean, of course, they are in Latin America as well, but to see these divides so even here, I think that caught my attention a little.”

Ricardo noted that Brazil is struggling with COVID-19 around the same levels of the U.S. Brazil also has a leader like the U.S.—that guy is referred to as the Trump of the Tropic. Brazil also has its history of Black people being disproportionately killed by cops, he said.

Even Yu—who comes from a country that has been at the epicenter of the police brutality issue in recent years—was shocked by the societal unrest plaguing the United States. The sight of crowds of maskless protestors gathered together and shouting in the streets took him by surprise and gave him serious concerns for his health and the health of those around him.

But, as any good protest is intended to do, seeing the groups of people standing together to fight inequality made him sympathize with the Black Lives Matter movement.

“I support them, but I can’t join them,” Yu said. He has found another way to express his activism, though: his art. Walking into his temporary dorm room, inside a building where he, other international CCAD students, and even students from Denison University have been housed since the quarantine began, the first thing one notices on a table riddled with art supplies and projects is a hand-drawn sketch of Floyd. Drawing is one of the ways that Yu has been combating loneliness during COVID-19 isolation, though it’s hardly been enough.

“Everything you need to decide by yourself, and doing something by yourself isn’t always easy,” Yu said.

International students may have already started rethinking America as an education choice even before this newest calamity. According to a November 2019 report from Higher Ed (insidehighered.com), the number of new international students in undergraduate degree programs in America decreased by 2.4 percent for the third consecutive year in the 2018-19 school year. The Trump administration’s move certainly didn’t help that cause.

Higher education institutions recognize the value of recruiting and helping international students find their place in the United States.

CCAD and Columbus State have been diligent in communicating the ever-changing visa rules to the international student body as well as providing students with timely information in regards to maintaining their immigration status. For those international students struggling with financial security, the International Student Service (ISS) has helped them find scholarship opportunities and assisted students in filing the “Severe Economic Hardship” application, allowing them to work off-campus.

The administration at CCAD believes that higher education institutions need to include their international student body more in conversations regarding the overall welfare of the university.

“Higher education institutions can ensure they are serving international students by including them in conversations on strategic planning and governance, making sure they are engaged in student government, and considering curriculum adjustments that weave in more culturally relevant content, literature, and artists,” said Athena Sanders, Dean of Students at CCAD.

“We never speak up, and the university doesn’t see us as a threat to the public image,” Chang said.

Following the F-1 visa announcement, the international students and scholars at Ohio State penned an open letter to the university demanding that action be taken to better aid the international community at OSU.

The F-1 visa requirement was overturned after Harvard University filed a lawsuit against the Trump administration. International students no longer face deportation for taking a slate of online courses at Ohio colleges, but the isolation of COVID persists as students begin to come back to school and social distancing measures remain. Some international students don’t even know yet if they’ll be able to fly back to the U.S. for classes in the fall if they do choose so. Those who cannot fly back might be forced to take virtual U.S. college courses at strange hours. Perhaps, though, the greatest difficulty isn’t staying in the U.S. for school, but when can they leave to see their families?

For Yu, it came sooner than he thought as he caught a flight home on July 22. Even though he didn’t pay the exuberant $9,000 price tag, he still had to cough up $6,000 to catch the flight. Upon his return to China, he self-quarantined in a hotel for 14 days, where he paid around $90 a night. Then he had to quarantine for seven more days in his home in Shenyang. If Yu chooses to visit his girlfriend, Bela, he’ll have to quarantine after his four-hour plane trip as well. The isolation and loneliness seem to be an endless loop for Yu.

When asked if Yu will come back to the United States at some point, he said, “Of course,” citing that he still has American friends and won’t be able to capture the student experience he had his first semester at CCAD through online courses.

“It’s totally different, I think,” Yu said. “Sitting here face to face and having a talk is a different emotion.”