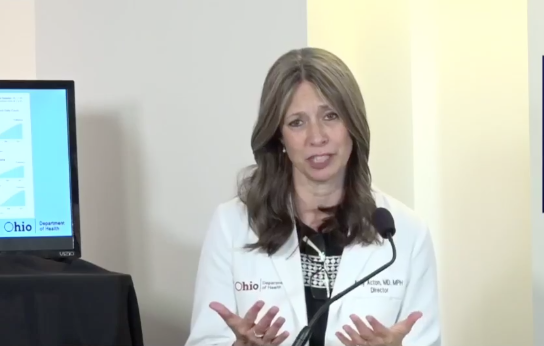 The silver lining of quarantine: Cleaner air, parks and rec

At a 2 p.m. press conference on Thursday, Gov. Mike DeWine announced that Dr. Amy Acton would be resigning as Ohio Department of Health director.

DeWine mentioned in the press conference that he tried to convince Acton to stay on as the state health director. After a brief introduction, DeWine gave Acton a few moments to speak.

Acton also mentioned that she’d be taking a big-picture look over the department instead of focusing on central Ohio. Public health issues will be her new area of focus.

When asked about her decision to resign, Acton mentioned that she wanted to take the time to be with her family and gear up for the next possible phase of COVID-19.

“I feel that with the pandemic and what the governor is doing for really promoting the health of Ohioans, I really want to give that my complete attention,” Acton said.

The decisions she has made as director over the past couple of months have drawn some harsh criticism, however.

In May, people began protesting the stay-at-home order outside of Acton’s house. More recently on Monday, a group of northeast Ohio restaurants filed a lawsuit against the Department of Health Director Dr. Amy Acton and DeWine, according to a report from Fox8.

Even with the resignation, Acton will remain as the governor’s chief adviser on health issues. Ohio Department of Health General Counsel Lance Himes will serve as interim director.
Acton became a household name following her handling of the COVID-19 pandemic. She was featured on the cover of (614) Magazine’s April issue, which was also mentioned in a New York Times video tribute.