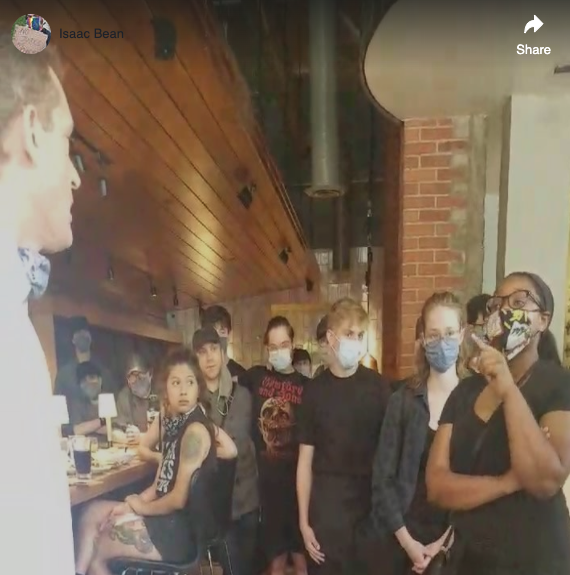 Employees from three Columbus-area restaurants staged a walkout Saturday after a 50-percent discount to uniformed officers was reinstated by Organic Trails Cafe, the company that owns Northstar Cafe, Third & Hollywood, and Brassica.

“Like many other organizations, Northstar is struggling to find the best way to go forward supporting everyone and staying true to our values,” said co-owner Darren Malhamme in a statement to (614) Magazine.“Our early response to the current unrest around the country was made quickly and emotionally. It involved suspending a long-standing discount for police and firefighters. We regret the decision and have reinstated the discount program.”

In reaction to the reinstatement, employees of Northstar Café’s Short North and Westerville locations and Third & Hollywood in Grandview staged a planned walkout June 6.

Video of the walkouts first surfaced on Facebook. The two-minute clip featured Malhamme, who co-owns the restaurant along with his brother and founder Kevin Malhamme, at the Short North location defending the company’s decision to move forward with honoring the discount. An employee interrupted Darren before he had a chance to finish speaking.

You can see the original post with the video at the bottom of this article.

Video of the Westerville location walkout was also captured. You can watch it in the tweet below:

Westerville Northstar stages walkout over staff wanting to suspend their 50% discount for law enforcement. Employees were upset when corporate reneged on removing the discount. Corporate said, “We support our first responders and also support the movement for social change.” pic.twitter.com/i0ZSfEZcVa

(614) reached out to Kevin and Darren Malhamme for a statement and received this comment back from Darren:

“Northstar supports social justice for all, inclusion for all and fair and equitable treatment for all. We support our first responders and also support the movement for meaningful social change that’s happening around the country to raise awareness for unfair and unequal treatment. In addition to a donation to Know Your Rights Camp, a foundation whose mission is to advance the liberation and well-being of black and brown communities through education, self-empowerment, mass-mobilization and the creation of new systems that elevate the next generation of change leaders, we are listening to all members of our community to help us determine where we most effectively invest time, money and resources to increase mutual respect, equal treatment, inclusion and stop the killing and violence that arise from lack of these values.”

“We understand that there are multiple views and multiple groups involved in trying to find a solution to the problems” that have plagued our country and deepened division,” the statement read. “We believe the best we can do is help with healing,” and make changes that create a real difference to bring us together.

(614) reached out to members of the group that walked out, but had not received a comment at the time of publishing.