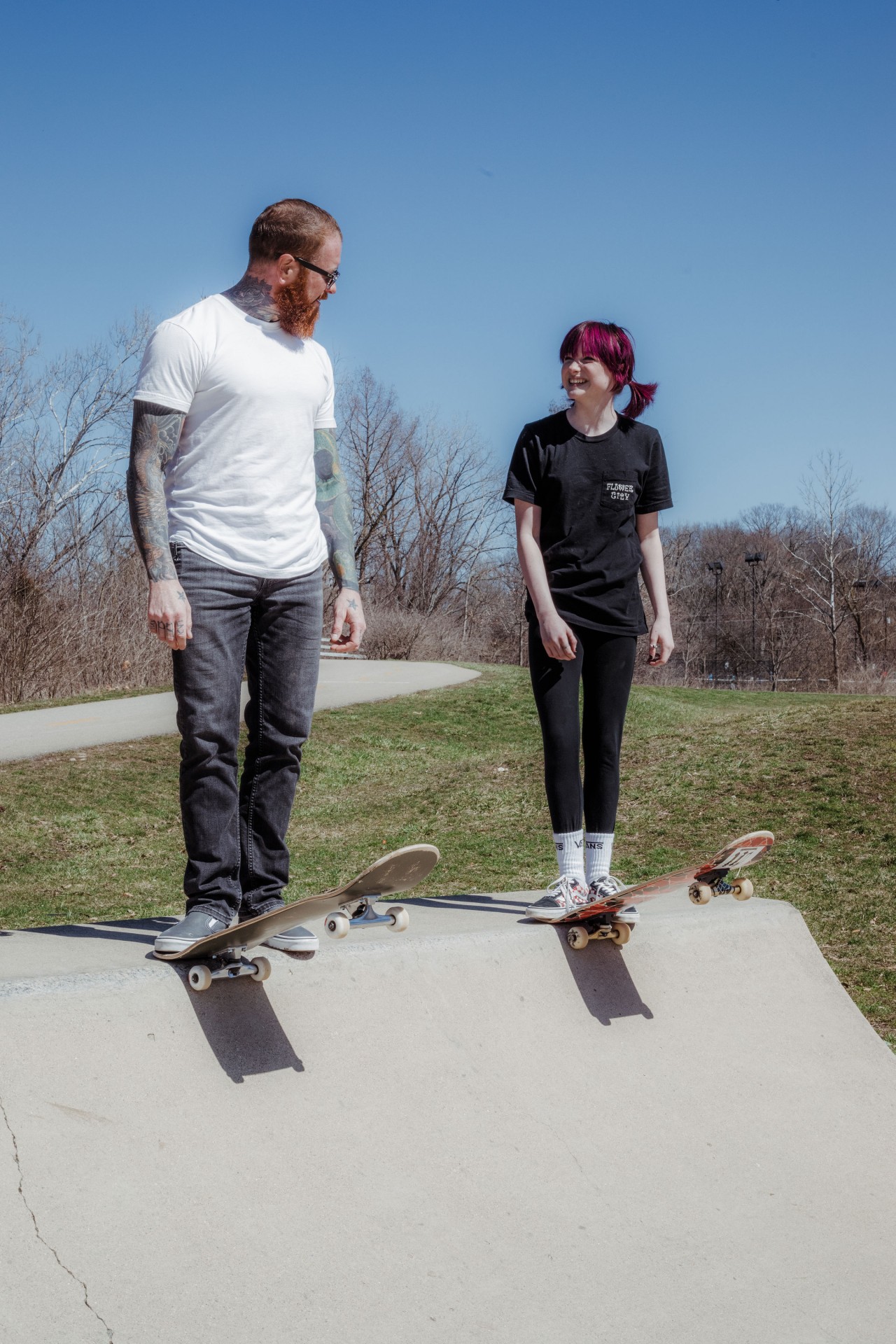 How skateboarding has brought three fathers and their kids closer together

For many parents, one of the greatest joys is sharing things you love with your children. And for three local dads, a passion for skateboarding is helping them not only reconnect with themselves, but also build connections with their kids.

For Clintonville resident Markus Matthews, movies triggered his passion for skateboarding in the late 1980s, and soon he began competing and skating all over town.

“Through high school, college, work, sometimes we’d have to skate at 1 or 2 a.m. to avoid summer heat and police,” he said.

Then, a car accident in 2000 left Matthews re-learning to walk. It was years before he started pushing around on his board again, rebuilding his skills.

“We went to Skate Naked [skatepark] on the east side,” Matthews said. “He saw what Dad could do, and he wanted to do it as well.

Troy, now 9, tells his father the board skills he’s working on, then goes off to learn and practice with friends. Matthews’ daughter Myla, 6, joins them at the skateparks, too.

“At first, she would grab Daddy’s board and sit on it,” Matthews laughed. “Then she just hopped on. She’s kind of finding her way, too—no instruction from me.”

While Matthews’ daughter is following in her father’s footsteps, another father in Blacklick credits his 13-year-old daughter, Molly, with his return to skateboarding.

AJ McMillen discovered his passion for skateboarding in elementary school.

“The kids that were skating were the kids I was drawn to,” he said. “The little outcasts, the art kids.”

After college, McMillen went to Colorado temporarily to help open a tattoo studio.

“I had no health insurance, no means of financial security whatsoever,” he said. “I couldn’t run the risk of actually injuring myself. I hung it up. I really didn’t touch a skateboard until a couple years ago when I got one for Molly.”

AJ and Molly worked on their own, in nearby lots and their garage, until Molly was ready to try the indoor skatepark.

“I didn’t even have my own board,” AJ said. “She tricked me. I took her to the skate shop to buy some pads, but then she said, ‘you need to get your own board.’ That way, I could ride with her.”

For her part, Molly enjoys skating with her father.

“It’s fun, because it’s kind of like having a friend to do it with,” she said. “I’ve learned faster than if I was just doing it on my own.”

But eight years ago, he recommitted to the hobby.

Lately, Poling has been skating in his driveway in Worthington four or five days a week,

Although the boys aren’t serious skaters (yet), Poling says skating also gives him another way to spend time with them.

“Even if they’re not skating, they’ll shoot baskets and talk to me about video games and things while I’m skating. We can just hang out,” he said.

All three men truly relish the opportunity to connect with their children.

“It’s a gift,” Matthews said. “Our worlds are the same, but totally different. They go to the skatepark and just skate; there’s no phones, they just go. It’s a dream come true.”