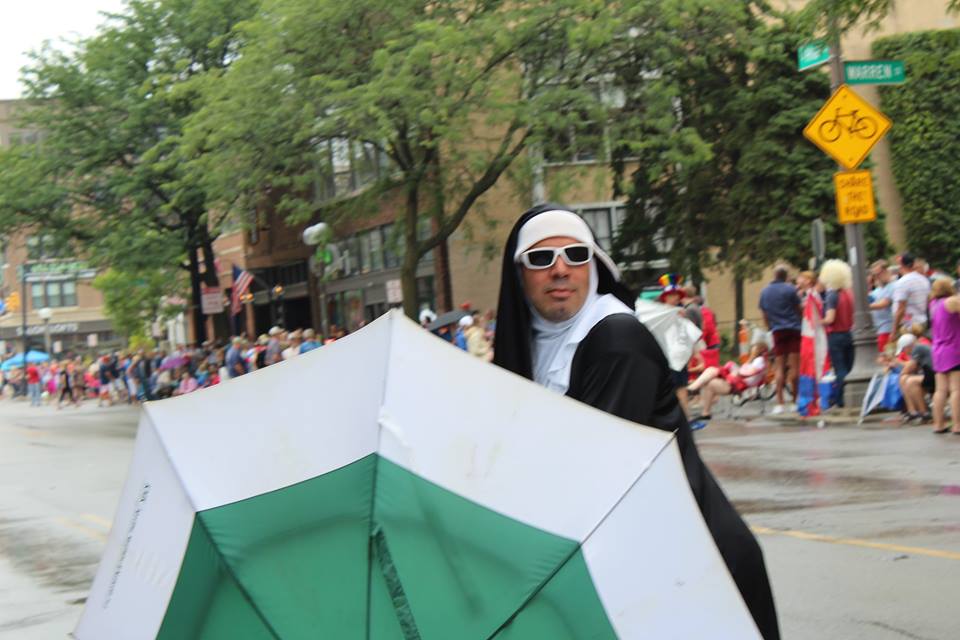 A dozen people all dressed like the infamous Cuban leader Fidel Castro have kidnapped Columbus news anchor Andrea Cambern, and they don’t plan on releasing her. Nearby, a man with a “save the werewolves” sign asks you for the time, while a space alien with a Medline walker shuffles casually by.

While this might sound like that strange, recurring dream you have at least twice a month, all of it—from the Castro impersonators to the extraterrestrials—is totally real, and it’s all part of the whacky magic making up the city’s long-standing Doo Dah Parade.

Eschewing most rules and a general sense of order, the event embraces the weird, wild, and hilarious side of Columbus. Billed as a satire-heavy “Celebration of Liberty, Lunacy, and Freedom of Speech,” the parade—which meanders around Goodale Park in the Short North—invites anyone and everyone to participate, and at any time.

“Of course, we encourage people to jump in along the route,” said Deb Roberts, who has been a Doo Dah organizer for over 30 years. “Don’t just sit on the sidelines and watch!”

This summer, the Doo Dah Parade will see its 38th year of operation, and will also include a day-long party at Goodale Park with live music. According to Roberts, the event all started in the early 1980s, when a group of friends sitting around the Short North Tavern, bored of the typical Fourth of July parades and programs, decided to launch their own event.

“They said, ‘Let’s put a parade on, but let’s not make it a normal parade, let’s do stupiud stuff,” she recalled. “And the stupid stuff has continued now for 38 years.”

Even though one of the parade’s most beloved groups, the aforementioned Marching Fidels (don’t worry, Andrea Cambern was in on the kidnapping gag) have disbanded following Castro’s death, there’s never a shortage of fascinating and hilarious participants. There’s the Raging Grannies, the Space Force, The Gorn Supremacy (dressed like the aliens from a 1967 episode of Star Trek), and more funny political satires than you can shake a stick at.

And while we’d love to give you a full list of who’s participating in the 2021 parade, we can’t. That’s because, in an act of defiance against normalcy and routine, the parade doesn’t allow anyone to pregestier: “Just show up!” a 2021 flyer reads.

According to Scott Crawford, a Doo Dah Parade participant for over 20 years, this is actually part of the event’s charm. “To me, the parade is the antithesis of everything that’s static and planned,;that stuff takes the fun out of things,” he said.

A professional costume designer, Crawford has been playing the role of Captain Ohio—a deliberately-wonky version of Captain America that he created—in the parade since 2008, and this year he was asked to stand as Doo Dah’s “less than grand marshall,” a rotating figurehead who leads the celebration.

Naturally, political floats and slogans are a regular site at the gathering. Some are poignant—such as the man who walked the route in 2016 covered in one year’s worth of plastic shopping bags for the sake of environmental awareness. But Roberts reminded us that, above all, fun and good humor win out at the Doo Dah Parade.

This is in line with the parade’s few rules, which ban nudity and advertisements, and require any politicians present to wear a silly hat.

And Crawford agrees with Robert’s assessment of the parade. This year, as he leads the hundreds of the city’s weirdest through the Short North, he’s going to make sure to keep a smile on his face, no matter what.

“Some people have used the parade for political messages, like burning a flag, but I’ve always felt you can get more out of what you’re trying to say with humor,” he said. “If you’ve got a point to make, do it with a joke. More people will get it anyway.”

If you like this, read: Your guide to summer events