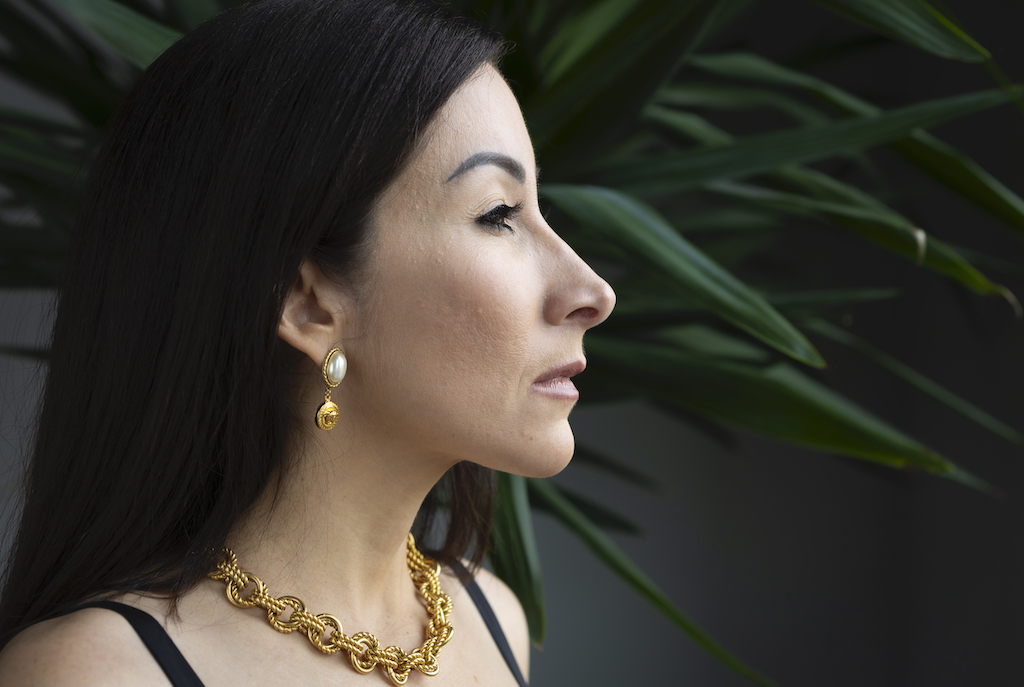 This rare item, which shipped from Japan, cost her a whopping $850.

After unpacking the delicate, sought-after garment, Otero gingerly carries it up a flight of stairs to her in-home studio before laying the suit out across a workspace tabletop and dutifully tearing off the original buttons, one by one.

Believe it or not though, Otero has good reason to destroy part of the expensive garment she just ordered.

She’s the brains behind Designer Jewelry Co., a Columbus business that crafts and sells one-of-a-kind jewelry—from bracelets and necklaces to earrings and chokers—using buttons, metal logos, and charms from repurposed designer clothing as centerpieces.

“A lot of times I would see these great designer shoes that were older, a little worn out,” Otero said. “Even though most people thought they should go in the trash, I remember thinking how great it would be to give them new life, even if it’s just parts of them.”

So while the buttons on a vintage Chanel suit are a good source for jewelry charms and trinkets, so too are shoes. Visiting her Dublin-based home studio, she had just finished surgically removing the large gold logo from a weathered Ferragamo shoe and affixing it at a rakish angle to a long, gold link chain she salvaged from a Clintonville thrift shop (her chains are regularly repurposed from area thrift stores).

And when it comes to designer items, Otero doesn’t discriminate. She buys everything from Versace handbags to Louis Vuitton shoes to Gucci keychains—the last of which she recently transformed into a beautiful silver choker featuring the iconic Gucci GG logo made from 0.925 sterling silver.

“The entire process is relaxing to me; it’s a release,” Otero said. “It’s just the act of creating something, and it’s that part of it where I get to think in a different way. I experiment with all the different shapes and charms and chains to find what feels right to me.”

It’s not just the creative process that excites Otero. The everyday search for new, rare, and interesting pieces is part of what she loves about Designer Jewelry Co.

“I’m addicted to the hunt,” she said with a laugh.

Otero warns there are pitfalls to her unique brand of high-stakes online shopping though: counterfeit clothing. She’s been sold fake designer goods on three different occasions, but now verifies each item through a third-party authenticator that uses detailed photos of logos, stitchwork, and serial numbers to ensure pieces are legitimate.

She’s even gone undercover in an attempt to make sure the service is on point.

“I had a Louis Vuitton bag charm that I sent in with the wrong serial code on purpose,” she said. “But they caught it.”

Otero updates her latest hauls on instagram (@designerjewlery.co) and her website, repurposeddesignerjewlery.com, where interested customers can place custom orders themselves, and even learn the stories behind each designer piece used.

And while being able to give designer items and vintage chains new life in a litany of creative ways is important to Otero, one of the things she values just as much is giving her customers access to  truly original designer jewelry.

“This way everyone can have access to designer pieces in some sense, because when you’re buying directly from a boutique, these pieces can be very expensive,” Otero said. “But when it’s something repurposed, it’s still an authentic designer item; it’s a little piece that’s still really meaningful. And it’s totally unique.”