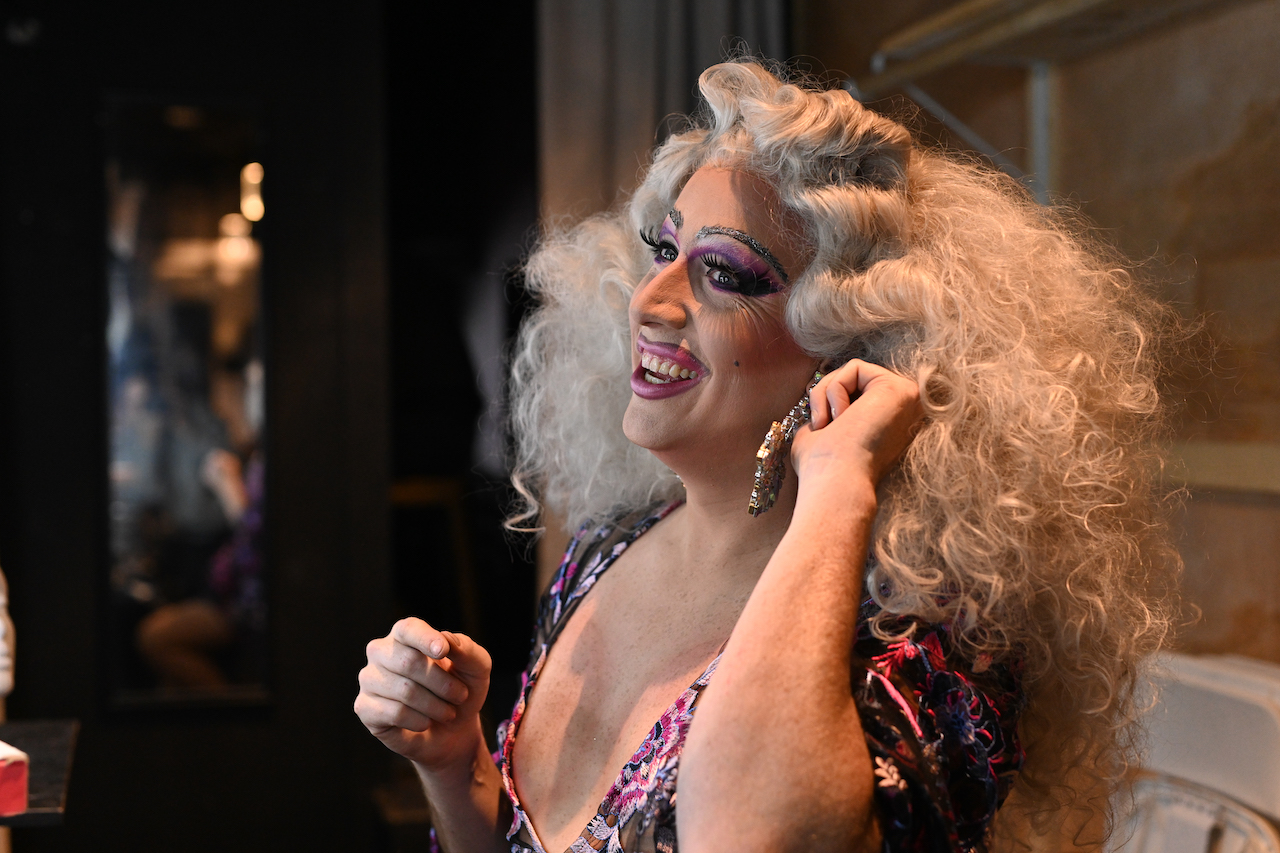 If you’ve seen a drag queen on stage in Columbus, chances are you’ve seen fashion designer Que Jones’s work. His gowns, outfits, and costumes are all over town. “I’ve made pieces for everyone,” he noted, laughing.

Designers are among the unsung heroes of drag. “With this last season of RuPaul’s Drag Race, people were like ‘These are the most incredible gowns we’ve ever seen. Why are they not tagging the designers, featuring the designers?’” he continued. “The queens didn’t do that work themselves.”

Indeed, the work that goes into drag fashion reflects a serious level of artistry and craftsmanship, which Jones has honed on and off throughout his life, adding he never was a “typical boy.”

On family vacations, he chose basket making with the women instead of airshows with the men. His grandmother nurtured his crafting spirit, even teaching him to sew on her machine. Then, in college, he fell in love with drag.

“I was a poor college student, living off of a TA stipend. I had enough money to almost pay my rent and eat,” he said.

Then, queen Virginia West asked Jones to do a show. But, at 6’2”, Jones realized that finding the right outfit was going to be a challenge. And even when you’re a new drag queen, there are exacting standards you have to meet.

“I am not a small person. I was going to all of the stores in town, trying to find anything that would fit me. But I’m a size 20/22, so everything was either super-ugly maternity wear, or it was three feet too short.”

Jones finally hired a designer to make his vision come true, then spent all of the money he made from the show to pay for it.

Eventually, he returned to the skills his grandmother taught him and, like many queens, began building his own outfits in a home studio.

At first, he took clothing that fit him and ripped it apart, figuring out how to construct patterns and piece them together. For the first four years, he only sewed garments in his own size, selling pieces to queens who were similarly built. Slowly, he learned to make garments in custom sizes, growing his craft into a full-fledged business.

Now, he balances fashion design with work as a professional musician, teaching at Capital University, and directing a church choir. He combines those passions at his own live piano cabaret, “Don’t Tell Gretta” starring Gretta Goodbottom, on Sundays at District West.

Because Jones insists on taking measurements in person to ensure a perfect fit and look, most of his clientele is in the central Ohio area. There’s no shortage of queens looking for custom pieces, though. Jones estimates he produces 6 to 12 gowns per month, plus 60 to 70 bar costumes and other pieces.

“The one thing I want to hammer home, and this is for everyone, is that designers and tailors are very skilled labor,” he continued. “So when you take your wedding dress in and someone quotes you a price to hem it, don’t be a jerk.”

Unsurprisingly, drag queens’ gowns are pricey. “Stoning” a gown, blinging it up with rhinestones, can take hundreds of hours and cost thousands of dollars, and that’s on top of a piece that can take dozens of hours to build. For that reason, there’s a tradition in drag of reselling and handing down costumes.

“I’ll go to an open stage night, and I’ll see this person that I’ve never seen before, and it’s a costume I made for someone else 7 years ago,” Jones said. “I love to trace that lineage, seeing where my work ends up and how it got there.”

You can see more of Que Jones at @grettagoodbottom on Instagram