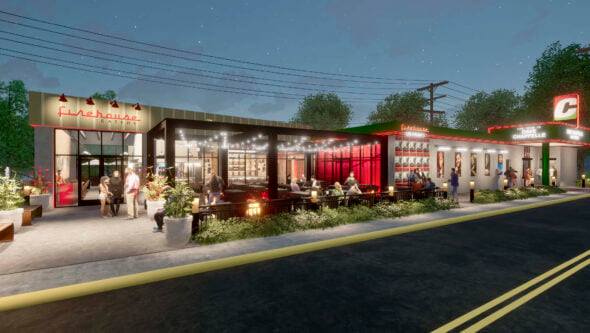 The quaint and quirky village of Yellow Springs in Greene County is already one of the most popular day-trip destinations for adventurous Columbus residents.

And now it’s set to become just as viable for a night trip.

That’s because plans for a restaurant and comedy club owned by legendary stand-up comedian Dave Chappelle (who resides in Yellow Springs) were unanimously approved by the city’s planning commission in a Sept. 14 meeting.

According to plans submitted to the Yellow Springs planning commission, Chappelle’s new project, located at 225 Corry St., will occupy the 7,300 square foot former Miami Township Fire Station in Yellow Springs. The restaurant will be called Firehouse Eatery, and the comedy club Live at YS.

Submitted by Crome Architecture, the plans detail indoor and outdoor seating, a full bar, fire pits, a mural, and even a neon facsimile of Chappelle on the front of the building.

Max Crome (of Crome Architecture) referred to the project as “a landmark restaurant, a landmark club” when addressing the commission last week.

“This is the kind of place people will be talking about all over the world,” he said.

Chappelle, who also spoke at the planning commission meeting, shared similar ambition for Firehouse Eatery and Live at YS.

“If we do this thing, I’m telling you, all the greats, they’ll come,” he said.