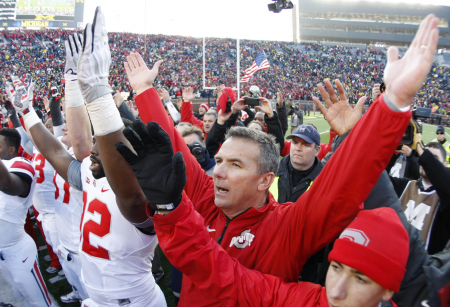 (Editor’s note: Stock & Barrel and (614) Magazine devote plenty of ink to the people with their names at the top of the menu. This is the first in a reoccurring series about the integral employees in the culinary trenches, the guys and gals behind The Guy or Gal)

Bill Glover is a legitimate food star in the capital city. His talent resonated for years from the small kitchen at Sage American Bisto in the Old North, and when the Downtown Hilton took its place on the Columbus skyline, it was Glover they tapped to run the culinary show.

While he often had to turn away talented chefs from his tiny space at Sage, now Glover is in charge of a massive team at the towering hotel, an artisanal army of 25-plus that has elevated the menu of its head chef to one of the best in the city.

Twenty years after Glover started sweating it out in hot, cramped kitchens, chalking up stitches in his hands, he’s overseeing the next wave of potential Columbus heads chefs, eager up-and-comers who spend more time with their kitchen team than they do with their own families.

“Every successful chef has two things: a strong support structure at home and a talented and inspired team of cooks in their kitchen,” Glover said.

While Glover is quick to point out that there are plenty on the team that are worthy of praise, here we focus on five crucial team members and their roles at the restaurant.

Let’s go Behind the Line, and meet the inspired team at Gallerie Bar & Bistro:

Glover’s right-hand man, Kayser is the day-to-day operator of the restaurant, overseeing purchasing, production lists, and managing inventories and direct supervision of the staff. He and Glover work on menus collectively and design seasonally changing options together.

“Josh has been a big part of three kitchens I have been in as the executive chef in over the years,” Glover said. “He and I have a shared approach and philosophy that is not easy to come by and makes the creative process very fluid.”

At a hotel serving three meals a day, 365 days a year, you need a strong person in charge of the daytime crew, and that’s Grieves. She worked her way up from the Gallerie’s opening team, and a spot on the p.m. line before recently being promoted to Sous Chef.

“Allison has done an amazing job with our staff during breakfast and lunch to bring the consistency we strive,” Glover said. “She is an amazing cook who has traveled the world developing her style and approach to cooking. Her palate is incredible, and she has a delicate touch with flavors that is difficult, if not impossible, to teach.”

Kamel is Glover’s “mad scientist.” Always studying on the job, Kamel reads anything he can get his hands on, and according to the head chef, is often the most knowledgeable member of the team in this area of expertise. He brings modern cooking techniques into the kitchen, including inventive pastry concepts for Gallerie’s dessert menu.

“He is a natural cook who picks up on new ideas and flavor profiles with ease,” Glover said.

“When we need a strong cook for a big production, Rick is the first to volunteer,” Glover said. “If we need a rock on the grill for a busy night in the restaurant, he’s happy to do it. He has a maturity that speaks to the skills needed for leadership roles and has a promising future in this field. He is an asset to both sides of our kitchen.”

As passionate as he is meticulous, Fortney typically works the lunch-dinner swing shift and has learned every station on the line in four months during both lunch and dinner. Steady and calm, he brings a consistency to the line that is crucial during rushes.

“Jon is the quiet storm; he can go from a slow breeze to a hurricane of action seamlessly,” Glover said. “He could have 50 checks hanging or two and he is the same guy: calm, consistent, and focused on quality.”