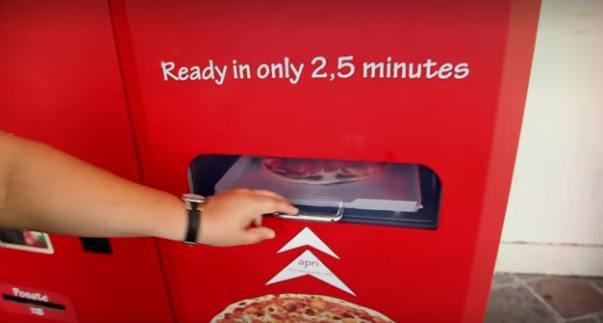 Cincinnati’s Xavier University will install the first Pizza ATM in North America. The company, Paline, says their magical Pizza dispensing machines will hold 70 pizzas at once for $10 each.

In a sentence I’d only think to write in a sci-fi novel, the Pizzas will be cooked, shuffled into a cardboard box and then ejected through a slot.

What is this fresh hell? And most importantly how did we miss this?

Where are Columbus’s pizza robots? Huh?!

These pizza ATMs are pretty normal in Europe apparently, and have been around for 14 years, says Paline. Small towns, gas stations or pizzerias – why you’d go to a pizzeria to order your pizza from an ATM, I don’t know – but hey, it’s Europe.

Apparently, the pizza isn’t bad either. Jennifer Paiotti, Xavier’s Marketing Director, told WCPO-TV that even though she’s a New Yorker she considers the pizza the best she’s ever had.

Watch the video below to see how the world will end, not with a bang but with a freshly baked pizza.

Pizza Paradise at Slice of Columbus