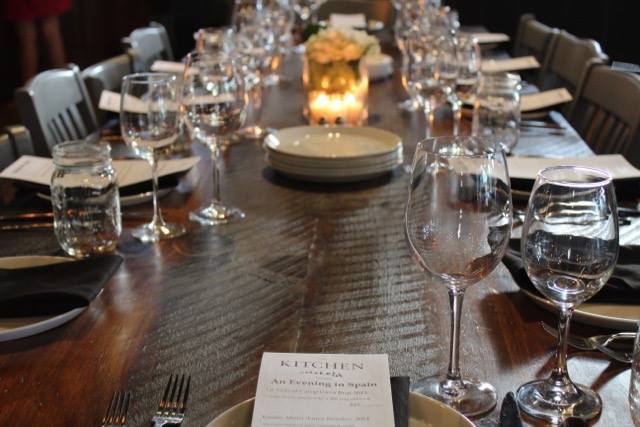 I didn’t know what to expect, and I was a little nervous — I can proudly say I’ve been to many restaurants and eaten my weight in food through plenty of menus, but I have never, ever cooked my menu with strangers.

The Kitchen hosts family-style, cooking and dining nights, in fact — it’s their main gig. Their website at the moment of making a reservation gives you a menu of what you’ll be eating and drinking that night. I knew it wasn’t just your regular ol’ restaurant, so I was desperately trying to find meaning in the dishes as to what I would exactly be doing. It ultimately ended up being a total surprise. I’m a planner, and I try to be as prepared as possible. Alas, my boss just said, “have fun!” and off I went in search of a story.

When I first walked in, I thought I was in the wrong place. Sure it had the right name, and my GPS had told me I had arrived at my destination, but the people there looked like some sort of secret society getting ready for a meeting. And what a strange meeting it might have been. Diners sported everything from Hawaiian shirts to ritzy lace cocktail dresses. There wasn’t anyone younger than 30, or so it seemed, and as a small 22-year-old with a camera on my hip, I felt a tiny bit out of place.

A hostess walked up to me and saved me from my inner crisis as I spat out the words ‘614now,’ and she escorted me to Jen Lindsey, co-owner of The Kitchen. I told Jen what I was there for. “Oh that’s great! Just chill out for about half an hour, and then we’ll get cooking!” she said. Her smile was infectious and my anxiety slowly melted away. 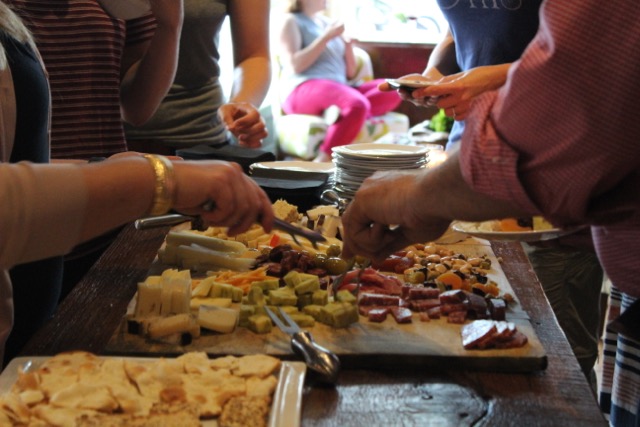 There were tiny tongs to grab the cheese with, and as I struggled with a bit of aged parm, a man next to me explained to his mate, “Ah yes, I do believe this is some mustard cheese, and perhaps some cranberry gouda, you know, it’s a bit red, like cranberries.”

I ignored the cheese man and moved on to what looked like hard salami, it smelled smoky and sweet. But my favorite was the parmesan; it was rich and much deeper in color than that Kroger parm I usually buy.

I munched away and sat down at one of the tables. There was a bar not to far from me, small with an array wines and liquors on display. The menu said it’d pair all the meals with specific wines, so I thought, hey let’s wash away the anxiety of social interaction with a healthy serving of wine. Surprisingly, the wine was $8 dollars a glass, and the sommelier ( a nice word for person who knows a lot about wine,) was graceful and accurate in what he chose for me. 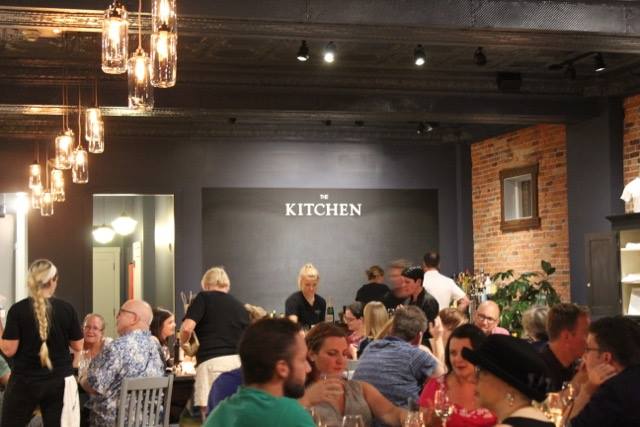 After a few minutes of munching and awkwardly sipping my wine, the chefs and owners of the restaurant came out. They explained the menu, rating each dish from easiest to make, to slightly less easy to make, as they put it. Diners would choose which dish they’d like to make, and if they didn’t feel comfortable cooking, they could watch and maybe drink some more wine. Each dish was tapas style that night, and inspired by traditional Spanish cooking.

I washed my hands and chose the simple olive buns to make. Many others gathered around the Spanish frittata, or the wine braised chorizo, and the dessert, an almond cake. But the olive buns group had an air of palpable excitement; we gathered around our recipe card like the holy grail.

“Take the olives, tomatoes, olive oil and garlic, and blend them until just chopped,”One woman, a teacher, read out the instructions and delegated tasks like an army commander. 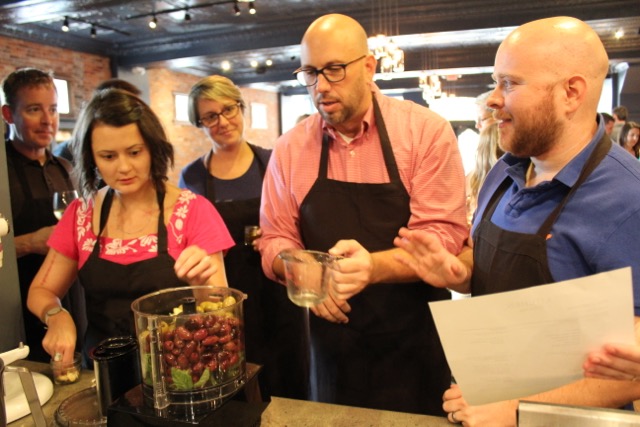 Her husband, a doctor, grabbed the ingredients and sped off with our group to the food processor, located in the kitchen portion of The Kitchen (you see what I did there? haha.) My camera lens fogged up as people from other groups had already began using the kitchen to cook.

After the olive paste was made, we had to handle the dough, which was conveniently already prepared and portioned out. That was truthfully the hardest part. I dipped my hands in flour and try to massage the dough into a thin sheet. It resembled pizza dough, and our group was struggling to roll it out. Chef Ann came to the rescue. 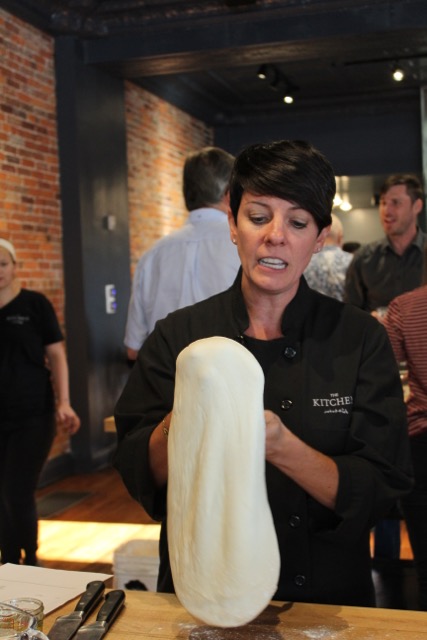 “Don’t tell Jen I’m teaching you something, but just use your fists to stretch it out,” she flung the dough across her fists and by sheer magic, it became a flat rectangular sheet. The chefs aren’t supposed to actually teach anything at the kitchen, since part of the experience is learning how to do it yourself using your team members to get the task done.

After about 20 minutes, our team had successfully stretched the dough and applied the paste, rolled the dough, and cut them into rings, where they resembled savory cinnamon rolls. 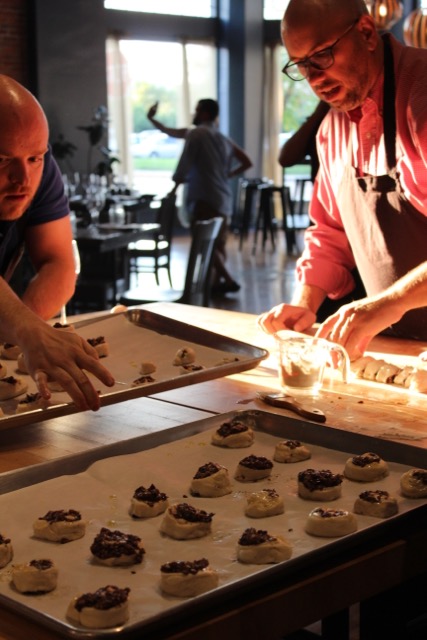 The time between waiting for our meals to cook and actually eating them I don’t quite remember, but after having worked together, my teammates and I seemed a bit more at ease and comfortable with one another.

“Cooking together levels the playing field in a way no other thing does.” Jen Lindsey, co-owner of The Kitchen, was right. I was no longer an out-of-place 22 year old, but a member of Team Olive Bun, and I knew a little about each person at my table. “This is a place where people are allowed to make friends in a really organic kind of way,”Anne Boninsegna, the other co-owner of The Kitchen said.

The food started pouring in and Anne introduced each course by asking who made it, wherein whatever teams would cheer and the rest of the 40 guests would clap. It was all very celebratory, like we had just gone through the Olympics and not six very simple, and easy to make recipes. 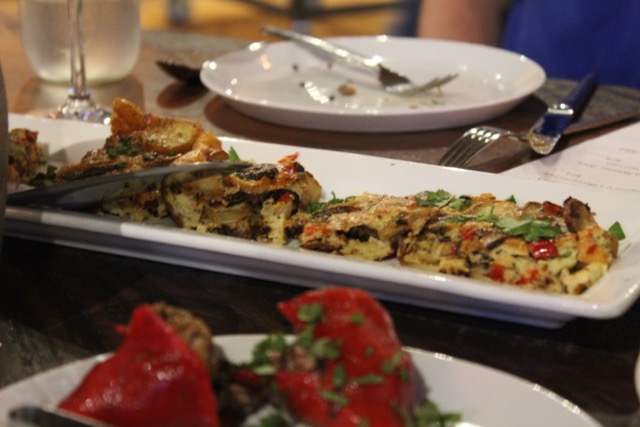 Wine did come with each course, paired perfectly and sourced expertly from wineries in Spain. My favorite dish was of course the one I helped make, but the Spanish frittata and the chorizo were outstanding as well.

The night winded down as the food and wine stopped, but guests didn’t start leaving until well after. As guests started trickling out, I asked the chefs what they take home from each night they host. My question was interrupted by a smiling, giggling guest who embraced Jen and Ann and waved goodbye.

“That’s what we take home,” they both said,”No job is better than this.”