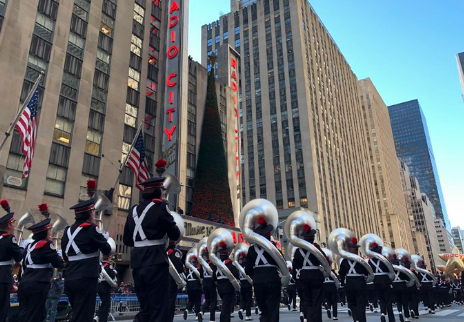 On a cold Thanksgiving morning in New York City, the Ohio State University Marching Band made us all proud to be Buckeyes.

Christopher Hoch, assistant professor and director of the Ohio State Marching and Athletic Bands, told Ohio State News that it was always a dream to be a part of the Thanksgiving Day parade.

“I thought it was a great time to come play for everyone in New York,” fourth-year student Michael Rueda told Ohio State News. “It was great to have so many Buckeyes here supporting us for our concert.”

The band won’t have much time to relish in the accomplishment as they have a very important job to do tomorrow: Cheer the Buckeyes on to a victory over That Team Up North.

3️⃣0️⃣ minutes until TBDBITL steps off in the #MacysParade! pic.twitter.com/5WtuXv3Bal

No better place to spend the holiday than the #MacysParade — happy Thanksgiving from the TBDBITL family to yours! 🦃 pic.twitter.com/YUGoTEaTkX

Heading back to Colu❌bus after a great trip to New York.