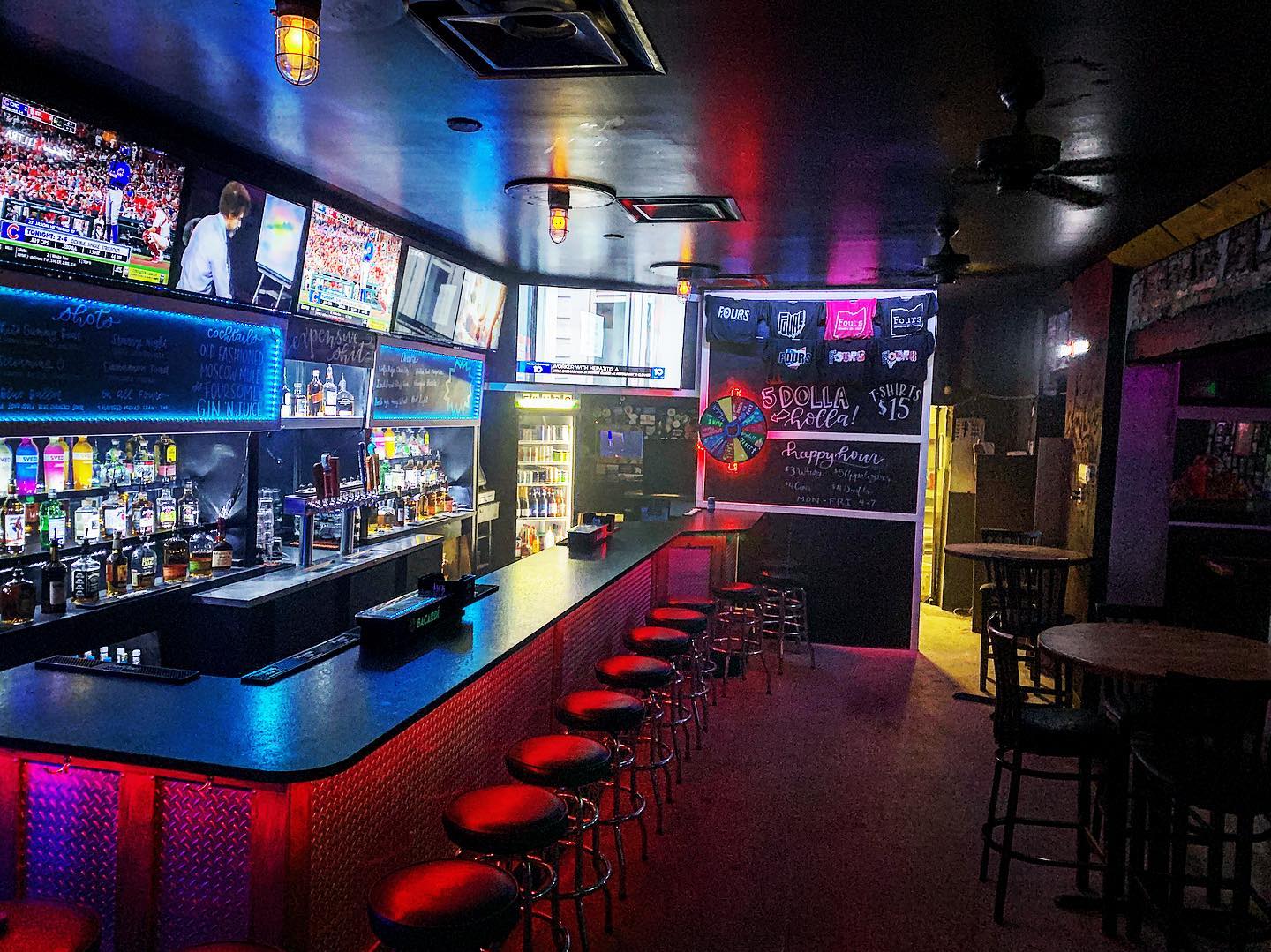 Update: After two-ish months of renovation, Barrel on High will reopen today under a new moniker.

Fours on High will hold its grand opening today at 4:00 PM. The rebranded establishment at 1120 N. High St. bodes a new bar, a live entertainment schedule, and a “divier” vibe.

See photos of the new and improved bar below!

06/06/2019: If Thr3es didn’t fill the void in your heart left when Toos was demolished, maybe Fours will be the ticket. After almost five years of owning and operating Barrel on High in the Short North, Scott Ellsworth will be rebranding the bar as a “divier” version of the whiskey, bourbon, and spirits hangout.

Ellsworth and his team will knock out walls, add another bar, and host live entertainment at the 1120 N. High St. establishment and reopening as Fours On High.

“We had been looking on campus for a space for Fours, because campus is our safe place,” said Ellsworth. “We started noticing how many students were coming down to Paulie Gees, Food Hall, Standard, Bristol, Bodega, Oddfellows and other spots in our now bustling neighborhood, where we once felt like we were on an island by ourselves. We were spending all this time looking for a place on High St. and here it was slapping me in the face.”

The staff will remain the same, including chef Chris East who will “come up with another killer menu,” promises Ellsworth.

“We are all excited to be staying in the Short North and having our busses bring college kids to a part of town some may not have been yet,” said Ellsworth. “Looking forward to you loving Fours On High!”

Barrel’s last day will be June 15 with renovations beginning June 16. The hope is to reopen as Fours by the middle to end of July.

Scroll down for a Q&A with Ellsworth by TJ Neer from our sister publication 1870 Magazine.

First and foremost: Is there any end to the numbered bars that you can think of? What if we get to Ten’s on High? Would you stop at 69’s? I hope you’d stop at 69, that’d be a reallynice number to stop on.

SE: I obviously hope the numbers keep going on long after I’m dead and gone and my grand kids are opening 69’s. But I’d have also been just as happy if I had just Toos til the day I died and they ran that. Obviously that wasn’t in the cards so I had to adjust. On the positive side I’ve gotten to hire so many more awesome people because our brand is growing. Some haven’t lasted as long as others, but every single person in my staff, past and present always hold a spot in my heart and are always welcome home, because that’s what our brand is about…Family!

Seriously though, we’ve seen a ton of success in the past from Too’s and now we’re seeing Three’s as one of campus’ most loved places. Do you anticipate the same level of love and loyalty with Fours?

I absolutely think so and that’s why we decided to redo Barrel to more of our brand that has done us so well in the past 12 years on high street. You have to believe in it to be successful. People love us because we’re real. My bars don’t have employee manuals, training books or shit like that. You’re hired based on your authenticity. We don’t want to turn you into a robot. We want you for being you and I think we all can see it’s working. People like to overthink shit and I’m glad they do. If a white trash kid from Parma can become successful by simply using basic common sense, anyone can do it. You just have to believe in yourself that much more than the person next to you.

What kind of environment can patrons expect at Four’s? Will it be virtually the same as Barrel? Will it be more like Three’s? Having just won 1870’s best campus bar for 2019, we know you know how to make a bar environment pop, we just want to know what to expect when we pull up to Four’s for the first time.

We’ve slowly been changing barrel over time and now we decided to finally rip the bandaid off and go all in. Our goal is to make it like what we know, Toos and Thr3es. You’ll definitely feel our brand when you roll in. You’ll even see jon white playing there some nights, which will in turn add some new faces to Thr3es love music thing. The thing I’m most proud of is my partners that I’m bringing along with me. My chef (Chris East) that I’ve had since day one at Barrel. My two Toos door guys (Andrew Savage and Sam McNaughten) turned bartenders will also be partners, along with my partners at Thr3es, Jon white and Aaron Thompson. I take pride in loyalty and I’m not afraid to share the experience of ownership with those that have been by my side. I’m sure 5s, 6s and 7s will be filled will staff who don’t even realize they’ll be owners one day. Empowering kids to see more in themselves than they ever saw and giving them confidence to do non traditional shit is worth more than any number in my bank account.

I recently turned 21, so this is actually the most important question: What date can I expect Four’s to open up? (Also will there be Tidal Waves at Four’s?)

We’re closing barrel on June 15th and we’ll be in there on the 16th ripping shit apart. We’re hoping to have the major stuff done within a month and be back open taking your money by mid July.

We’ve noticed, especially over the past few years, that lots of students are venturing further into the Short North to go to bars (Food Hall, Standard Hall) as opposed to sticking close to campus. Do you think Four’s is trying to capitalize on the growing number of students venturing to the Short North, or is it aimed at a different audience entirely (maybe YoPros instead of engineering students?).

I don’t think, I know we’re capitalizing on it. We’ve been looking over the past year for a bar to put Fours on campus and we realized that we already have one just a few blocks south of it. We just need to rehab it inside and rename it so it’s easier to cross promote with thr3es. We noticed how much the Thr3es bus was venturing to Barrels hood, so this is a no brainer. As far as customers, we play that just like Toos and Thr3es, we don’t give a shit who you are, you’re welcome with open arms into our bars. We have some loyal regulars at Barrel and I don’t see us losing them. Our brand is less about aesthetics and more about the staff, owners and musicians in it that make everyone feel like family when they come through the door. Yes tidal waves will be at Fours, but we’ll also keep Barrels beloved shot wheel. We did a lot of great things at Barrel and we’re very proud of that fact. We just decided Fours made the most sense, plus it’s literally on high and fourth.