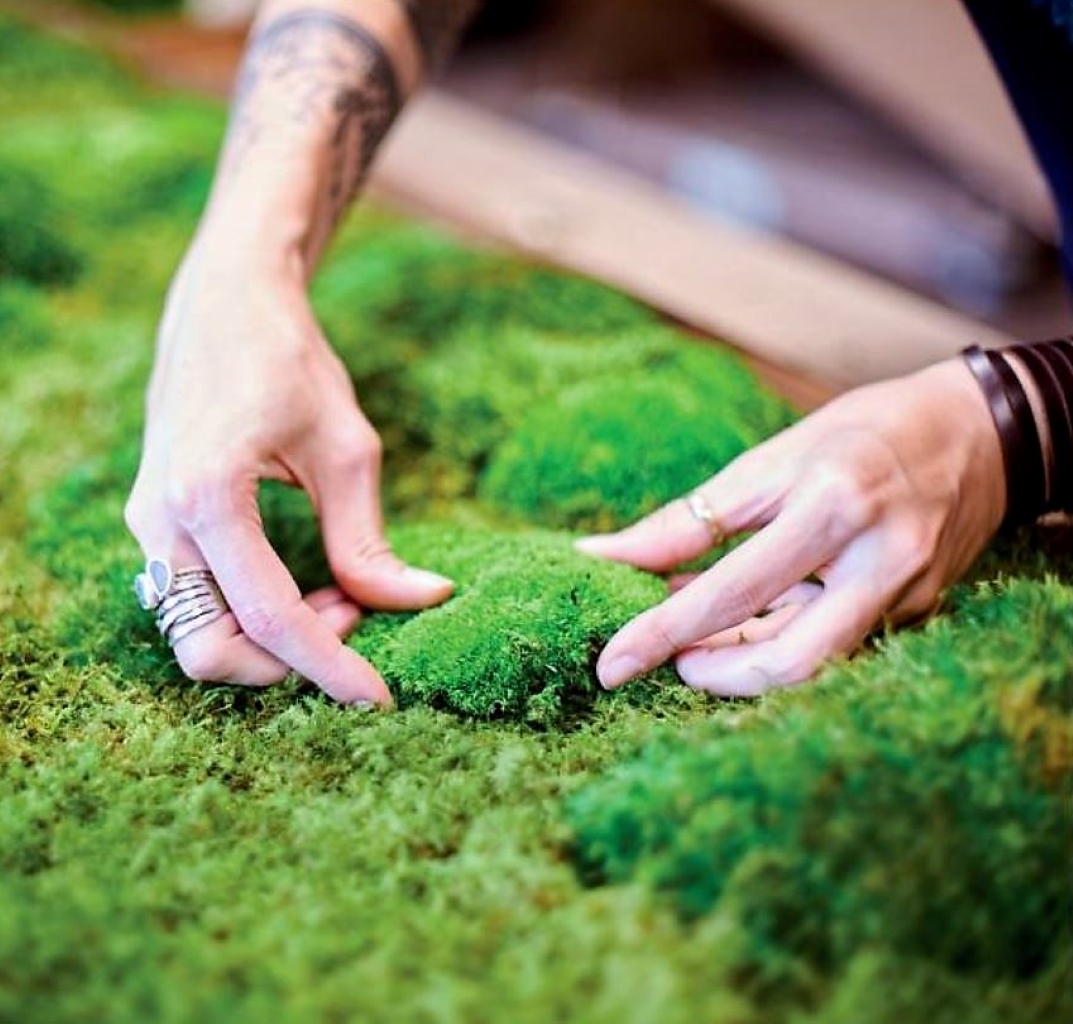 Libraries are the last great democracy

Local business brings the outdoors, inside and provides stress-reducing peace and calm

The three-foot-diameter wooden frame on the table is packed with fist-sized mounds of at least a half-dozen species of moss, arranged abstractly in a counterpoint of colors and textures. Nearby, large bromeliads with electric-purple centers nestle among dark green foliage in a partly-finished room divider. Planthropy’s south side industrial space is bright with summer morning sun, and more moss panels soak up the light on tables, above the desks, and stacked against the walls.

“Planthropy is founded on our love of nature, connecting with nature, and bringing the outdoors in,” said co-owner Jessie Laux. It’s called biophilic design—increasing connectivity to the natural environment.

They specialize in moss walls and hangings, as well as “living walls” of mostly low-light tropical plants, carefully selected to grow and thrive together. The moss is zero-maintenance; the living walls require specific, customized care, provided as an add-on service by the team. Pieces take from a few hours to multiple weeks to construct, with large works prepared in the studio and assembled on site.

Co-owner Michael Creath formerly owned a landscape design company. One day, he saw a picture of a living wall, and said to himself, “I want to do that.” Ohio weather constrained living-wall installations to indoors, but he embraced the niche. Laux’s background is in graphic design and art management, and she planted arrangements as a hobby. That hobby grew into a product line and workshops. She and Creath were paired on a project, and shortly thereafter, they decided to merge companies.

For their first three years, before COVID-19, the team installed moss and living walls in mostly corporate, event, and trendy mixed-use developments. They traveled the nation, working with architects and interior designers, installing large moss or living walls. Many of their installations were built after hours, as a surprise for employees.

Now, as corporate and event venues cut costs or shut down temporarily (or permanently), Planthropy’s clientele is shifting toward medical offices and homeowners. Doctors, dentists, and most recently plastic surgeons use biophilic-design installations and accents in the office to help reduce patient and staff stress.

The economic shift has been a blessing in disguise, allowing Laux and Creath to focus on goals they hadn’t had time to pursue before. One of the pillars is a product line geared more toward consumers.

“People knew they were going to be in their homes more, and they wanted a more thoughtful space; cared more about what they were surrounding themselves with,” Laux explained.

Planthropy is preparing to launch moss hangings in the shape of Ohio, as well as rolling room dividers for home offices. Prices range from around $75/square foot for moss works to around $150/square foot (plus maintenance) for living wall works.

“If you have a meeting [online], you roll these dividers out, and you’re in these walls of plants,” Creath noted. It’s a definite step up from the kids’ artwork or the purely functional beige home-office wall.

And now, with businesses closed, the living-wall maintenance service is seeing significant changes as well.

“Restaurants, I’m still going to a couple, after hours,” Creath said. “Some businesses, we’ve gone back. Some [clients], we trained. As a small business, we’re almost friends with a lot of these people, so training them to do our job—I didn’t feel so horrible, because of the relationship.”

The moss panels used in COVID-related home office spaces are self-sustaining. Planthropy uses a preservation process on the moss to keep its texture and color, and they affix it to the frame with floral adhesive. Because mosses don’t rely on roots for survival, they will live happily anywhere that has light, air, and a little humidity.

Planthropy also sources its moss sustainably—in fact, some of it is not even farmed. Moss is an invasive nuisance in Norway, and the Norwegians have taken advantage of its ubiquity by selling it overseas. Other mosses are farmed in Canada. None of Planthropy’s moss is collected from local sites or trips; tempting as it may be, the owners always respect the ecosystem.

Laux and Creath relish their role of bringing nature’s power to a wider audience. “It’s that feeling you get when you step outside and get to take a deep breath, and you’re like ‘Ohhhhh, I’ve needed this!’” Laux said. “We’re bringing that feeling indoors.”