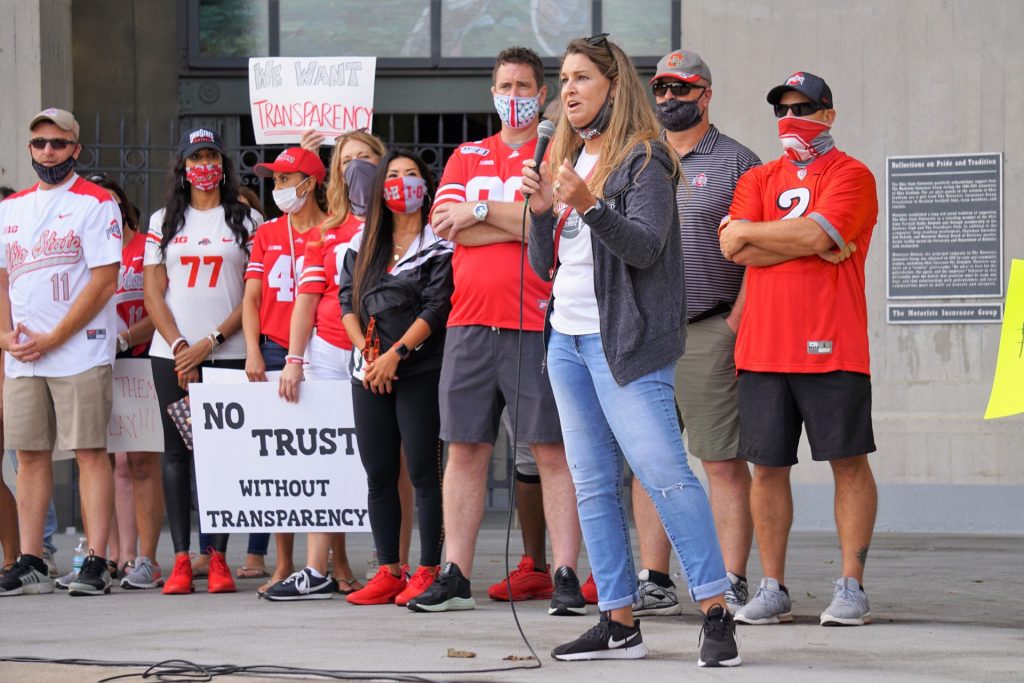 When Amanda Babb was tapped to become the president of Football Parents at Ohio State last January, she was looking forward to a year of planning banquets, communicating with coaches, and welcoming the incoming class of players.

“It was all pretty much spelled out in the handbook: ‘In this month, you prepare for this,’” Babb said. “And I’m like, ‘OK, I can do this.’ You know, getting ready for tailgates and things like that.”

Instead, Babb—stepmother to Ohio State wide receiver Kamryn Babb—found herself penning letters to Big Ten commissioner Kevin Warren, protesting outside of Ohio Stadium, and fighting tooth and nail for the Buckeyes to have a season at all.

“None of that was captured in the president’s handbook, I will say that. So it was kind of flying by the seat of our pants,” she said.

Babb, a molecular biologist and mother of three living in St. Louis, Missouri, got more than she bargained for when COVID-19 put the 2020 football season in jeopardy, but she and the rest of the FPAOS board quickly became some of the loudest voices in college sports. It was a hard and uncertain journey that thrust her into the limelight, but she is confident she did the right thing.

Babb is certainly no rookie when it comes to supporting her kids’ athletic endeavors. Both of her younger children play soccer, and on any given day, she might have all three of her children playing in a different state. Suffice it to say, she has her hands full even when she isn’t heading up a national movement.

Although Babb admitted it was intimidating, she said it was important that she take on the Big Ten to ensure the hard work of the coaches and players didn’t go to waste. She said she did it for the seniors who would have lost their last season, and for Kamryn, who was forced to sit out his first two seasons with the Buckeyes due to injuries.

“Everybody was putting in the time and the work and doing exactly what they were supposed to do, even away from Ohio State,” said Babb. “With all of that work that the players were doing, it was just, like, they have to have a season, you know? They’re doing everything right.”

At first, that meant giving up many of the traditions and events that the parents put together each year, in an effort to prevent the spread of the virus to the athletes. But when the Big Ten decided to cancel the season Aug. 11, Babb and the rest of the board sprung into action.

The FPAOS wrote a letter to Warren, demanding an explanation for the Big Ten’s decision and a chance for well-prepared teams (such as Ohio State, in Babb’s opinion) to play. It was an unusually public position for Babb, and far outside her comfort zone.

Soon, Babb was communicating with parents from across the conference and giving interviews to national sports outlets. Through it all, she said the support of the Columbus community was nothing short of amazing.

Despite demanding that the season go forward, Babb insisted that she is under no illusions about the severity of the pandemic. She saw the team’s viral outbreak in late November that benched players and head coach Ryan Day as an inevitability, especially when Franklin County was in the midst of a massive surge in cases.

“I was strong in my belief that the players were safer under the care of the coaching and the trainers at Ohio State than they were out in the general student population. And I still believe that,” she said.

As a scientist, Babb said she follows COVID-19 research religiously and wishes the general public would take the same precautions that she and the other football parents did for the good of their players. Although it may be hard to forego the backyard barbecues and sports bar celebrations, no fan has sacrificed as much as the players and their families.

“Driving up to Columbus and then watching the game, and then all we get from Kamryn is a wave from the sideline, I mean, that’s hard as parents,” said Babb.

Nevertheless, Babb insisted she was only doing what anyone would, under the circumstances. She firmly believes it is her job as the parent of a Big Ten athlete to advocate for her stepson’s success, as well as his health and safety.

Still, she said she looks forward to next year, when she hopes a vaccine will allow her to step back onto the sidelines instead of fighting front and center.