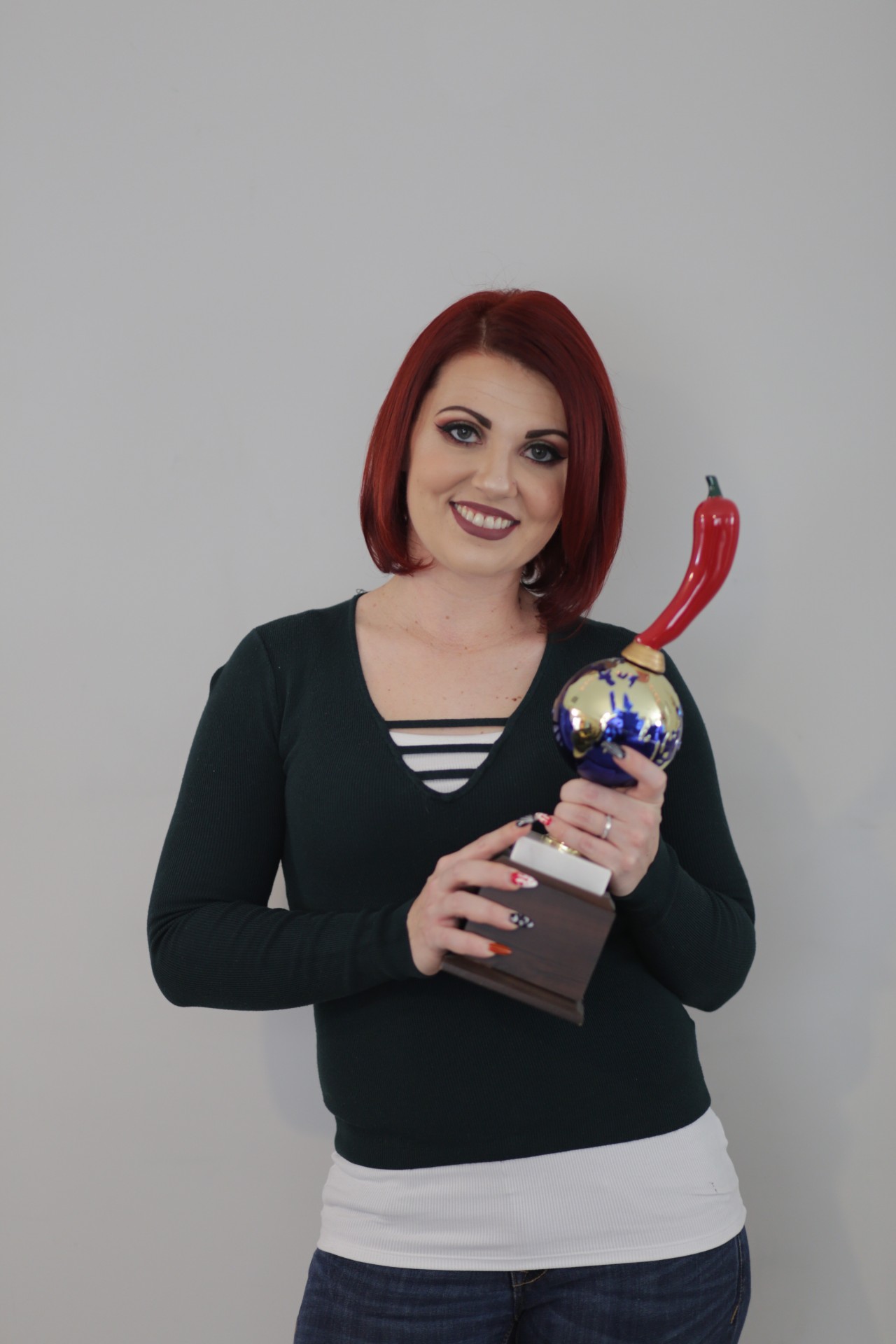 That’s how close Heather “Bella” Peters came to winning the Inaugural International Chile Contest, a masochistic competition in which chili-heads—those from around the globe obsessed with searing hot peppers—traveled to Fort Mill, S.C., to take on a field of contestants hand-selected by none other than “Smokin” Ed Currie himself, the man responsible for creating the Carolina Reaper—now recognized by the Guiness Book of World Record as the hottest in the world.

Peters repped Columbus on the Netflix show “We Are the Champions,” where her impressive showing to make the capital city proud is captured on Episode 2, “Chili Eating.”

The rules of the contest were simple, if a touch horrifying: Contestants had to eat the chilies before them (each was some form of twisted Reaper hybrid) down to the stem. If they tapped out, drank anything to quell the heat, or threw up (a common side effect of “ultra-hots”), they were out. The first person to finish their pepper each round was declared the winner.

The only contestant to beat her? A man who goes by the name of Dustin “Atomik Menace” Johnson.

“That’s the thing, Dustin actually doesn’t have the same kind of heat and pain receptors most people do,” Peters said. “I call him a robot whenever I see him.”

And even though it took a man who quite literally had an evolutionary advantage over the rest of the chili-eating field to beat her, Peters was now even more motivated to come away with a victory. And it didn’t take her long.

The very next weekend she won the chili-eating contest at the [2019] Fiery Foods Festival in Columbus. “When I got up on that stage I remember thinking, ‘There [is] no way I’m losing this; I’ll fight through the pain, do whatever it takes.’”

The chilihead even has a favorite among the “ultra-hot” varieties: The Trinidad Scorpion.

Averaging over 1 million scoville units each, these wicked looking, crimson-hued peppers can be 10 times hotter than a habanero, which are no walk in the park, either.

“The Scorpion has always been my favorite. It was the last pepper I ate to win the Fiery Foods Festival, but I’ve liked it even before that,” she said. “I love the way that it burns. It has this sting at first, and then the heat just simmers.”

And Heather’s love for such recklessly spicy foods—one she shares with her husband—can actually be traced back in large part to a single, fateful incident.

It all started with a trip to the gas station.

The couple had always loved spicy foods, and one day Brandon purchased a bag of Paqui Haunted Ghost Pepper tortilla chips from a nearby gas station. Hot enough in their own right (take my word for it), this package also fortuitously contained a voucher for one of the brand’s newer (at the time) gimmicks: The Paqui Carolina Reaper Madness One Chip Challenge Tortilla Chip.

These individually-packaged tortilla chips (they come in a coffin-shaped box) are criminally spicy, and birthed a social media craze in which brave souls would record themselves eating the single chip.

The Peters decided to do the same. Brandon decided he would film himself eating the chip, a move that not only helped spark their passion for hot food, but also birthed the couple’s now-beloved YouTube channel.

“We decided we wanted to film it and put it on YouTube, and shortly after, we were doing the same thing with all the spicy stuff we could find,” Peters said.

They named the channel “Heat 101,” to educate viewers about everything spice: Peppers, hot sauce, etc.

Nearly 400 videos and 15,000 subscribers later, the channel became the pair’s lifeline into the world of ultra-hots. Not only would they eventually form a massive communal friend-group with their online pepper-eating counterparts (meeting several times a year for chili and hot sauce conventions), they were also catching the attention of the chile godfather himself: “Smokin’” Ed Currie.

The couple had met Currie a few times at different events, but right around when the pandemic hit, he reached out to Brandon about the couple’s YouTube channel and ended up offering him a job. Later, he offered Peters a job as brand ambassador.

Working for Currie means the couple has access to all sorts of maniacally-hot chilies that are still technically behind the scenes. They even recently relocated from Ohio to Fort Mill, S.C. to be closer to the epicenter of the pepper world.

But while the couple’s YouTube channel secured the couple a pair of dream jobs, her online presence has allowed her to inspire the next generation of ultra-hot warriors.

Heather is motivated to encourage women to continue participating in the community, especially if they have the interest and passion but still harbor doubt.

“I get a lot of comments and messages from younger girls on YouTube who look up to me, and I reply to every single one of them because that’s important to me,” Peters said. “I tell them: one day you’re going to be up here with me too.”