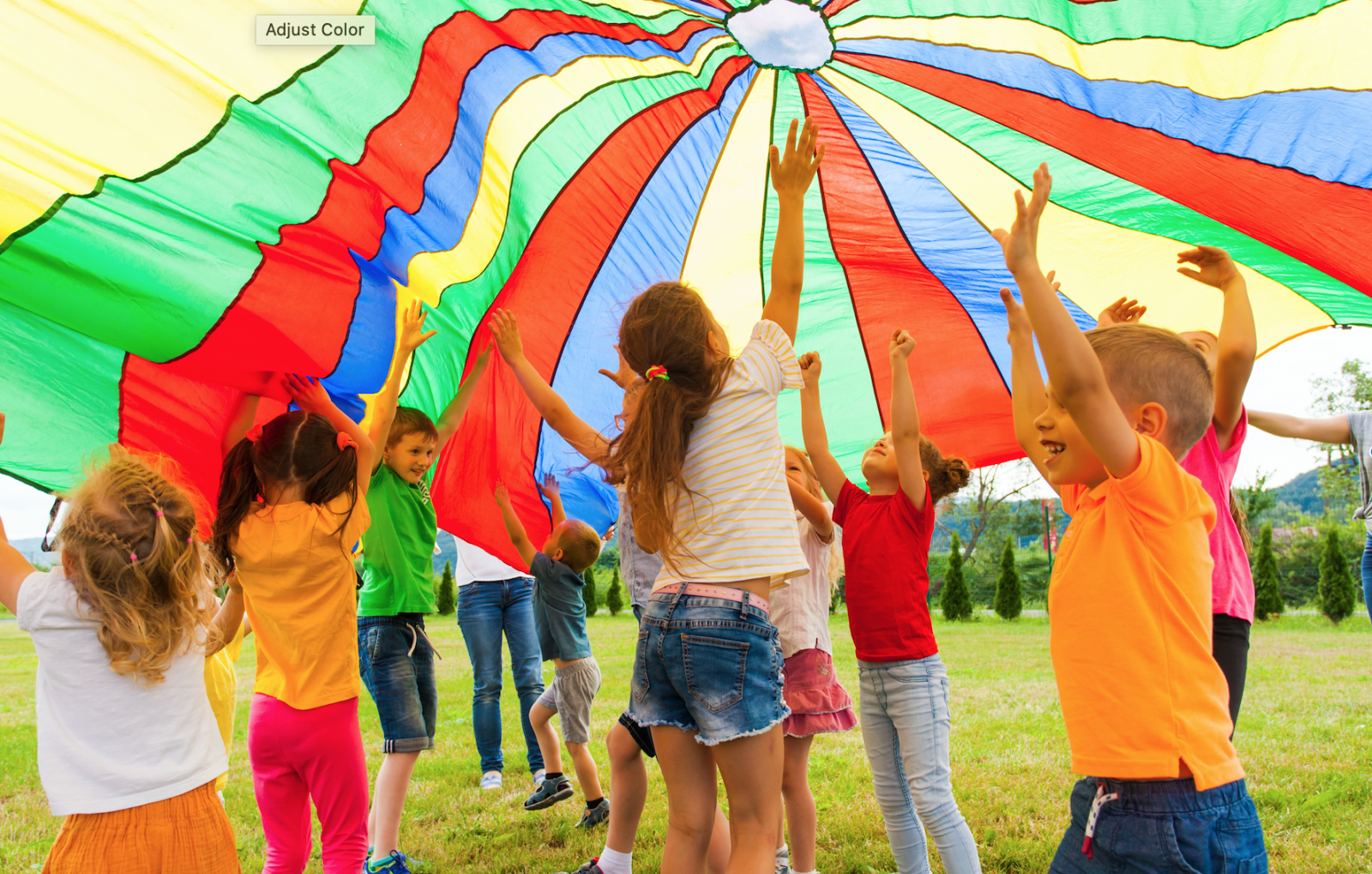 An enormous rainbow-filled nylon parachute blossoms into the air, accompanying the sound of music playing in the background. Enthusiastic people form a circle, holding the ends of the colorful cloth as others run back and forth underneath it. Smiles spread from person to person as they dance and play. Sparks of joy fly through the air like ecstatic electricity.

No, this is not a kindergarten PE class. This scene could be from any of the major music festivals across the world or even one of Columbus’ own backyard at events such as ComFest or WonderBus Music & Arts Festival in which a very special group of Columbus friends arrived to spread their message of positivity and wellness.

Unfortunately, instances in which The Parachute People—the collective behind the aforementioned pop-up, flash mob-esque performances formerly known as Roochute due to its presence at Bonnaroo Music & Arts Festival—would regularly promote their standards of positivity and mental health wellbeing have been sparse in 2020, with large gatherings put on hold for the time being.

“I realized my personality builds off of interacting with people like a natural extrovert, and I feed off that energy,” said creator and co-founder, Ron Holgado.

When I got into the routine of just being [at my job] in the hospital and isolating myself, it was really tough and got so tough where I had to explore options of how to help myself. And just from the years of doing The Parachute People, knowing that at some point you’ve got to know when to ask for help.”

But, even with their main medium of engagement sidelined, the organization refuses to let that happen to its message.

Michael, who currently resides in Massachusetts, spent eight years in Columbus, where most of The Parachute People team is stationed. Citing the city as “very friendly,” it’s also a landmark in mental health advocacy.

It’s right here in this friendly city that The Parachute People have partnered with Lighthouse Behavioral Health Solutions, an addiction treatment center that has locations in Whitehall and Lima, Ohio. And they also supported Nationwide Children’s Hospital’s launch of its “On Our Sleeves” campaign on World Mental Health Day back in 2018. The movement highlights how taking care of one’s mental health is just as important as one’s physical health and stresses the importance of identifying mental health issues early on in life.

A statistic that “On Our Sleeves” often cites is that 50% of all lifetime mental illnesses start before the age of 14. This is a number that co-founder and vice-chair Reed Walter also mentions in our conversation, adding that the average gap in mental health treatment is around 10 years, which means that some people won’t seek help until they have graduated from college.

Walter is also the founder of Rise Mental Fitness Studio, a platform that meets virtually once a week with a goal of strengthening one’s mental fitness, which he describes as a “concept…[that shifts the] lens [toward] everybody in the world has a benefit from focusing on cultivating their mental hygiene and cultivating resource reservoirs of emotional help.”

Walter started Rise Mental Fitness about a year ago, and the response to the online format has been extremely positive, especially due to its convenience and pandemic-friendly structure similar to other virtual therapy outlets such as BetterHelp or Talkspace.

“Some people have talked about how it feels a lot safer to just be talking through the screen and have that added level of separation,” said Walter.

Much like being certified to administer CPR, Walter is also certified in mental health first-aid, which was created in 2001 to address the needs of a changing society. Mental health first aiders are able to identify, understand, and respond to signs of mental illnesses and substance abuse disorders. Michael, Holgado, and others on The Parachute People team are working on being certified as well.

Walter, who has been on the frontlines locally in fighting for better mental health, participated in Collaborate & Elevate’s Mental Health Innovation Night in April 2019. On this day, a dozen Columbus-area mental health entrepreneurs gathered at the Wave Innovation Center to share their experiences. For a point of comparison in terms of where Columbus stands nationally in addressing the issue of mental health, Denver has 18 mental health startups. With entrepreneurs such as The Parachute People and Rise Mental Fitness working together with innovative giants such as Ohio State University and Nationwide Children’s Hospital, it’s no wonder that the capital city ranks right up there with a large metropolis such as Denver.

More recently, The Parachute People aided in developing a Self-Care Guide to Surviving and Thriving During COVID-19, with board member and GMU student Nicholas Sherwood and in conjunction with George Mason University’s Mary Hoch Center for Reconciliation and The Jimmy and Rosalyn Carter School for Peace and Conflict Resolution. The Self-Care Guide is conveniently broken down into two parts, surviving—coping with the pandemic—and thriving—how to take care of ourselves and others. At its core, the guide serves to build healthy habits and routines while isolating, as well as creating perspective and awareness that our current situation is only temporary.

With increased screen time and a flood of breaking news continually pounding Americans over the past year, doomscrolling—the habit of constantly scrolling or surfing through saddening and depressing news without being able to stop doing so—is more prevalent now than it has ever been. With the Self-Care Guide, there are tips to combat this, such as making adjustments to one’s routines and scheduling times for mental health activities such as journaling, meditating, taking nature walks, and even dancing.

Setting screen limits, something that’s available on most devices, is an effective way to fight getting sucked into a slippery slope of toxic news, but if you’ve come across a friend or family member who may have fallen into a doomsurfing trap, it doesn’t hurt to ask if they might need help. This is especially true if you suspect they may be in a mental health crisis.

“A lot of people think that by asking somebody [if they’re suicidal], they might kind of put the idea into somebody’s head, but the science shows that that’s not the case,” Walter said.

And although playtime at music festivals and concerts have been put on pause, for now, it’s important to remember something that was stressed multiple times throughout our conversation: that this is only temporary.

“I think all of us love interacting with people, and that’s part of why we’re in The Parachute People because we love that interaction with other people, and not having that has definitely been tough,” said Walter.

An excerpt from the Self-Care Guide reads: “Each of us must dance along this delicate balance: simultaneously protecting our health while making difficult ethical choices to adapt our normal habits to keep our communities as safe as possible.”

So just hold on, knowing that there will be a day when the group’s vibrant tarp makes a triumphant reappearance in public and we will all be able to dance together again. It’s important to The Parachute People that you know that YOU ARE NOT ALONE and that IT GETS BETTER.

At the end of October, The Parachute People launched a virtual, monthly campaign to create a safe space for their community to hang out despite not being able to interact physically. Stay up to date on its website and Instagram to join in on the socially-distanced fun, and where there are resources to help everyone exercise their mental fitness and hygiene. You can donate to the non-profit organization here.

If you or anyone you know is experiencing a mental health crisis, you can reach the National Suicide Prevention Lifeline at 800-273-8255, 24 hours a day.