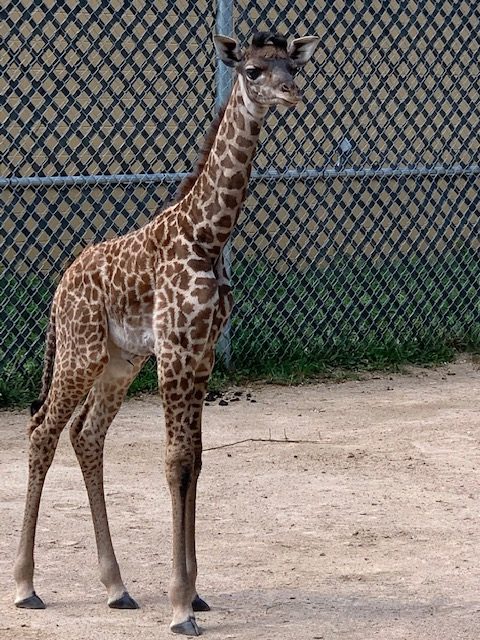 Picking which one is real is a piece of cake, right?

The Columbus Zoo revealed today that Jana, one of its Masai giraffes, gave birth to a female calf Aug. 27. This is the third birth this summer between the zoo and The Wilds, a nonprofit organization managed by the Columbus Zoo.

Jana’s delivery comes almost exactly two months after Zuri, another of the zoo’s giraffes, gave birth to a male calf June 28. Both calves are still unnamed, and were both fathered by 10-year-old Enzi, who was recommended for breeding with the mothers by the Species Survival Plan, a breeding program coordinated by the Association of Zoos and Aquariums. The Wilds also saw the birth of a calf Aug. 4 to mother Lulu and father Raha.

“These births are extremely significant, as these calves play a huge role in protecting the future of the endangered Masai giraffe,” Columbus Zoo and Aquarium President/CEO Tom Stalf said in a press release. “With the increasing challenges that Masai giraffes continue to face in their native range, it’s more important than ever to do our part to help them.”

The Masai giraffe subspecies was listed as endangered in 2019 by the International Union for Conservation of Nature after its population fell by nearly half due to factors such as habitat loss, civil unrest, military operations, poaching, and ecological changes.

The Columbus Zoo has been a major contributor to Masai giraffe conservation–raising hundreds of thousands of dollars and breeding 19 calves since its founding–in addition to partnering with the Cheyenne Mountain Zoo in Colorado to found a giraffe plasma bank.

The newest addition to the zoo’s herd is not yet on exhibit, but visitors can see Zuri and her calf roaming the outdoor enclosure at their leisure.

Zoo hours and more information can be found at columbuszoo.org.