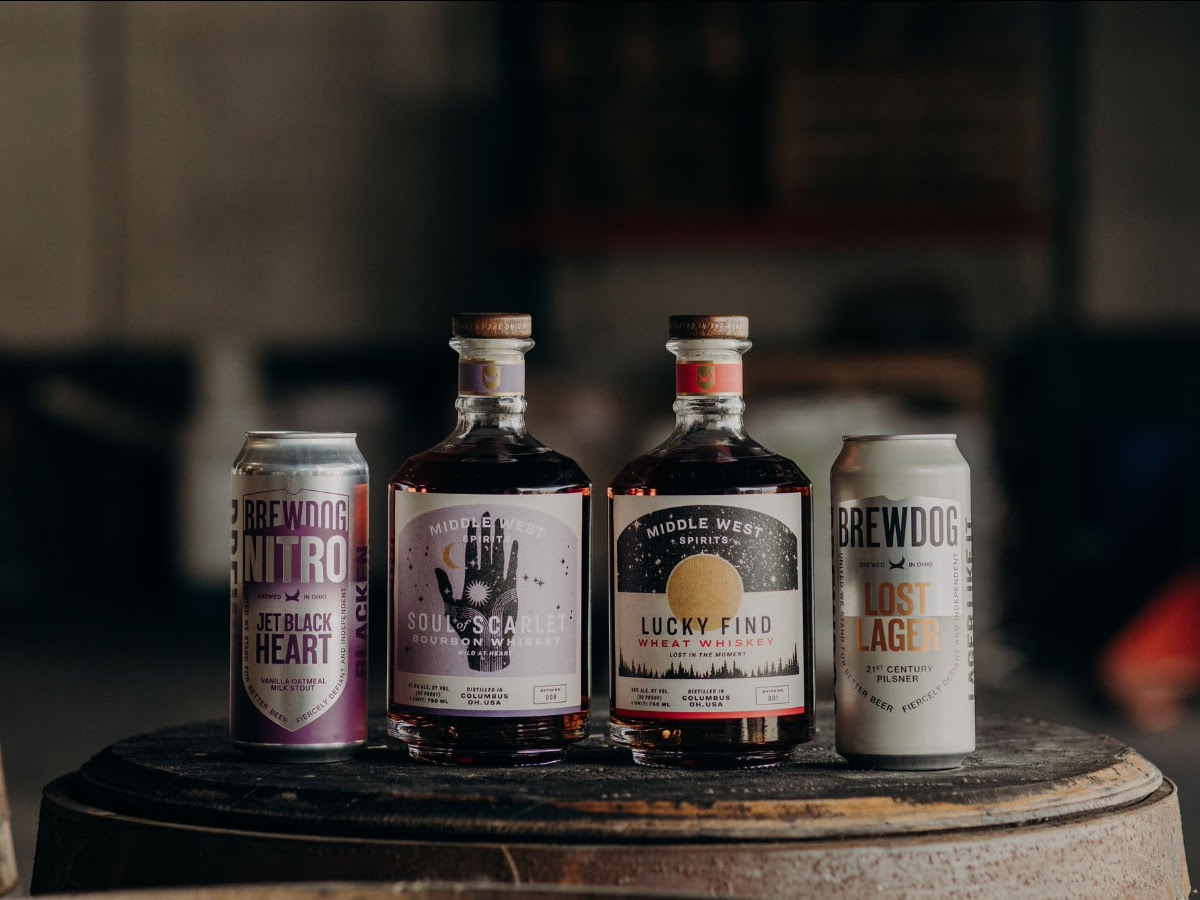 Columbus is in Big Ten country, so it’s likely many are familiar with one definition of a boilermaker as the locomotive mascot of Purdue University.

Now it may be time to get to know another boilermaker too–as a glass of whiskey consumed alongside a beer, usually following a hard day’s work.

In keeping with the North American tradition of the boilermaker, two of the city’s most lauded craft beverage producers, Middle West Spirits and BrewDog, have joined force to create the Boilermaker Series, which features two limited-edition Middle West whiskeys made to be paired with two core BrewDog beers.

“Lucky Find” wheat whisky (46% ABV) is made from red winter wheat aged over three years on white American oak, and is intended for consumption alongside “Lost Lager” (4.7% ABV), a dry-hopped Pilsner from BrewDog. The boldly-flavored whiskey—with notes of brandied cherries, vanilla bean, and caramel—is neatly balanced by the light, crisp citrus notes of “Lost Lager”.

The collaboration with BrewDog follows several years of hard work by both the Brewery and Middle West that involved rigorous tastings pairings.

“About two and a half years ago, we were doing some events with BrewDog, so we were able to sit down and discuss an opportunity to collaborate with them,” Said Middle West founder Ryan Lang. “What we were looking for is balance: how did they complement each other. There were definitely a lot of products that didn’t work together too, so it was a process.”

And according to Middle West General Manager Josh Daily, the union represents the distillery’s drive to work and grow together with other like-minded Columbus businesses as well. “As a small company, we definitely want to support other small companies, and getting together to build something is pretty cool,” Daily said.

BrewDog is no less enthused about the partnership, as Jon Quick, Head of Retail at BrewDog USA, said, “At BrewDog, we’re always excited about the opportunity to collaborate with our community. This partnership, grounded in friendship and an appreciation for both trades, is no different”.

Both new whiskeys retail for $45.23, and are available for purchase online and in the Middle West bottle shop. Additionally, the spirits will be available at select retailers within the vicinity of BrewDog locations in Ohio, Indianapolis, and Pittsburgh.